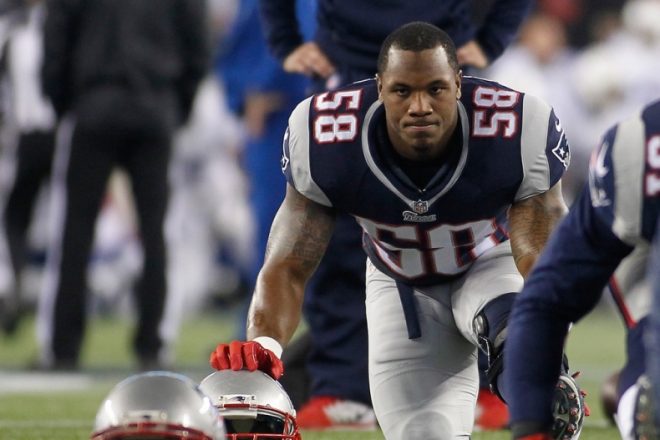 In a story that first gained publicity through a Facebook posting by his high school, it was learned on Tuesday that Patriots linebacker Darius Fleming had rescued a woman following a car crash. The incident occurred a mere two days before the Divisional playoff match up with the Kansas City Chiefs about a mile or so away from Gillette Stadium near a Dunkin Donuts on Thursday night.

Fleming spoke with reporters on Tuesday to discuss the incident. According to ESPN Boston’s Mike Reiss, Fleming told him “a large truck made an unexpected right turn on Route 1 while he was driving away from Gillette Stadium, which he said led to three cars colliding in front of his vehicle.”

Fleming was quoted saying, “I was about to go around it, but I noticed the lady in front of me, she kind of was jumping around the car, passenger seat, back seat, and I noticed smoke building up inside the car,” Fleming recalled. “I tried to open the doors and it wouldn’t work. So then I was just like, ‘I have to get her out of here. I don’t know if this lady can breathe or what…I started banging on the window. It wouldn’t break. So then I started to kick in the window and eventually it broke.”

Fleming was unable to get the name of the woman he rescued, she has been interviewed by local media since the incident was released but has chosen to remain anonymous according to the Walpole Police Department who also released multiple press releases regarding the incident Tuesday evening.

“On arrival the individual in question was not on scene and due to the nature of the accident there was no follow up to this information as the identity to an unknown good Samaritan had no bearing on this report. We are attempting to obtain more information at this time and will follow up with another release should we learn more.”

After assisting the victim The Good Samaritan left the scene w/out identifying himself.The car had airbag deployment&the window was broken

The police report does not reflect the actions of the Good Samaritan as he was not identified at the scene.The victim is grateful for help

NECN’s Kathryn Sotnik gathered the following information from the victim.

Victim says she was "in shock" that a @Patriots player rescued her. Says he offered to stay with her. @dfleming58

Witnesses also say #DariusFleming's own truck was almost hit on Rte 1 when he was helping the woman. Thankfully it wasn't. @NECN

The witnesses to crash say #DariusFleming was wearing shorts, a Pats winter hat and a Pats hoodie. @NECN

I'm talking to someone who witnessed the crash and watched #DariusFleming pull the woman out of the car "like a rag doll." @NECN

That was only half the story for Fleming, as he ended up seeing game action against the Chiefs Saturday night following injuries to fellow linebackers Jamie Collins and Jerod Mayo, the latter out for the season. As stated in the Facebook posting, he “suffered a cut to his leg that required 22 stitches to close” following the rescue but Fleming still managed to play 16 snaps and contributed by gathering a tackle on defense and special teams.

“It was a little freaky, but anyone in that situation would’ve done the same thing, It’s just, I was there. I’m glad I could help her”  he told Ben Volin of the Boston Globe.

Unfortunately, some doubted the legitimacy of the story after some reporters were unable to find it in the police logs right away and Fleming expressed his disappointment at their insinuations over Twitter.

People are quick to try and bring you down….so sad

Safety Devin McCourty was asked about the incident and shared his thoughts. Video courtesy of the Boston Herald.

The Fleming story comes almost a year to the day when former Patriot, Vince Wilfork, also made a route 1 rescue near Foxboro following the Patriots AFC Championship win over the Colts.