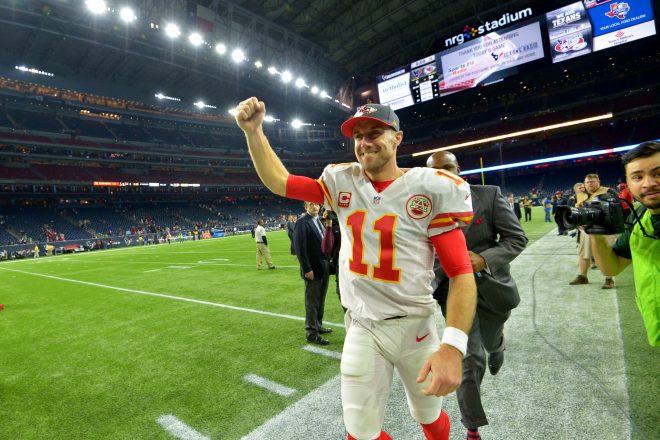 The Patriots season in essence begins on Saturday as they take their first step in attempting to repeat as Super Bowl champions. Their opponent in the Divisional Round of the Playoffs are the Kansas City Chiefs. The game is scheduled for 4:35 p.m. at Gillette Stadium.

The game will be televised by CBS with their announcing crew of Ian Eagle, Dan Fouts and Evan Washburn on the call. The game can also be heard on the Patriots flagship radio station of 98.5 the Sports Hub with the voice of the Pats Bob Socci on the call with Scott Zolak.

Kansas City (11-5), is the NFL’s hottest team having run off 11 wins in a row and on Saturday thrashed the Houston Texans on the road 30-0. They haven’t dropped a game since a road loss to the Vikings left them for dead at 1-5. The two teams have never met in the postseason but the Chiefs curb-stomped the Patriots in Arrowhead last year 41-14 on MNF.

Here are our Five First Impressions of the Chiefs:

Defense is Excellent Across the Board: When looking at the Chiefs defense, they play the classic 3-4 with three big down linemen and have an outstanding linebacking core. During the 11-game winning streak, they allowed an average of 11.6 points per game.

The Chiefs have outstanding bookend pass rushers in Tamba Hali and Justin Houston although both are a bit dinged up right now. But the Chiefs registered 47 sacks on the season and most came from the (pardon the wrestling pun), the Triple H’s; with Houston (7.5 sacks), Hali (6.5 sacks) and Howard with 5.5. The pass rush against Houston was particularly effective up the middle with Dontari Powe and Jaye Howard pushing the pocket back in Brian Hoyer’s face.

Powe and Howard are outstanding at the point of attack; they can take on double-teams and stuff the run or allow inside line backers Josh Mauga and Derrick Johnson to make plays. Their active and are good laterally as well.

The Chiefs secondary is outstanding with corners Sean Smith and rookie Marcus Peters who had eight picks this season. Opposing QBs targeting Peters had a 67.7 passer rating this season. Safety Eric Berry is recovered from his cancer treatment and plays down in the box and is very active. Many Patriots fans will remember S Hussain Abdulla from the pick-six he returned against Tom Brady a year ago.

Maclin’s Absence Could be Key: Chiefs top wide receiver Jeremy Maclin suffered an injury during the Texans game and it was initially thought to be an ACL injury but he’s been cleared for that. He did suffer a high ankle sprain which may keep him out of this weekend’s game.

Even if he does play, an ankle sprain may limit his effectiveness and Maclin has been their most productive WR by far in 2015.  He’s caught 87 passes for 1088 yards with eight touchdowns for KC this season. The next most productive wide receiver is Albert Wilson with 35 catches for 451 yards and two touchdowns.

If Maclin can’t go it would put more pressure on QB Alex Smith to find their excellent tight end Travis Kelce in the passing game as their best option. Maclin’s either limited status or absence will probably put Kelce on the Patriots radar as the player they most have to take away.

Smith Leads a Varied Offense: The Chiefs offense may be one of the most balanced that the Patriots see this season. They’re almost 50/50 with runs and passes with 473 passes attempted and 436 runs.  Last season their offensive line dominated up front and the KC rushing attack gashed the Patriots for 207 rushing yards.

With the dangerous Jamaal Charles on IR, the Chiefs turned to Charcandrick West, who averaged 4.0 yards per carry while racking up 634 yards and four scores as well as Spencer Ware who averaged an impressive 5.6 yards per carry while gaining 402 yards as well on the ground. They use some three tight end packages as well. But Andy Reid will mix it up; you’re as likely to see a run from the 3-4 WR spread as you are a pass from the 3-TE sets.

Smith is a very mobile quarterback who can hurt you with his legs as he was the Chiefs 2nd leading rusher this season with 498 yards. Knile Davis had only 28 carries this season but gashed New England for 102 yards on 16 carries last year.

Smith won’t throw the ball deep much or try to take many chances with low percentage throws, he’s careful with protecting it and had only seven interceptions this season. Besides Maclin, their biggest target is Kelce who is used in much the same manner that the Patriots use Rob Gronkowski.

Kelce will line up in-line, in the slot or split wide. He’s very good at generating yards after catch and will attack the seams. He had an impressive day against Houston with eight catches for 128 yards. On the season he caught 72 passes for 875 yards and five touchdowns. Kelce will undoubtedly draw the lion’s share of attention from the Patriots defense and he’ll be a handful, much like Gronkowski is.

They like to use secondary wide receiver Wilson in the running game, they’ll put him in motion and run the Jet Sweep and try to catch the defense over-committing. Rookie WR Chris Conley chipped in with 17 catches for 199 yards and a touchdown. West was effective out of the backfield with 20 catches and a 10.7 yard average per reception.

Turnover Battle Will Be Tough to Win: The Chiefs are outstanding at forcing turnovers. During the current 11-game winning streak, they’ve generated 28 turnovers and have a +20 turnover differential during that time.

They’re remarkably solid at not turning the ball over via fumble or interception and have been outstanding at generating them. With an offense that doesn’t generate a ton of big plays in the passing game, they feast on opponents’ mistakes and making them pay.

The Patriots are also one of the stingier teams in the league in regards to turnovers as they once again led the league with the least amount of fumbles in 2015. Tom Brady also threw only seven interceptions on the season as well. So one wouldn’t expect a lot of turnovers in this game and any generated by either team would be big.

Special Teams Will Bear Watching: As we witnessed on Saturday afternoon, the Chiefs special teams units can strike quickly. Knile Davis took the opening kickoff back 106 yards for a touchdown which quickly took the crowd out of the game and put the Texans firmly on the hot seat.

The Patriots special teams have had their issues in the second half of the season and the last thing they need is to give up a quick score to turn momentum or give the Chiefs a short field. With the injuries to Julian Edelman and Danny Amendola, the Patriots punt return unit hasn’t been as effective as they’ve been in the past. The Chiefs punt coverage unit has been solid, allowing only six and half yards per return.

Half of Dustin Colquitt’s 75 punts have been downed inside the 20-yard line this season and he had only five touchbacks. Cairo Santos missed seven field goal attempts this season and was only 4 of 8 from 50 yards and beyond.