7 years ago at 7:38 am ET
Follow @IanLogue
Posted Under: Patriots Commentary

The list of Patriots hurt this season defies logic, especially given the number of significant losses this team sustained who won’t be a part of New England’s upcoming playoff run.

That being said, here are five players who went down this season who are back and fall under the “they’re lucky they didn’t lose them for the year” as it pertained to their ailments.

Rob Gronkowski’s knee injury – This might go down as one of the most significant stories of the season after Gronkowski survived what at the time was thought to be a potential season-ending and possibly career-ending injury after the veteran took a shot to his surgically repaired knee out in Denver during New England’s first loss of the season.  At the time, the loss to Denver ended a 10-0 start by this football team, but after the game the loss was far from anyone’s minds as the focus was on the health of New England’s star tight end.  It’s safe to say that everyone breathed a giant sigh of relief after it was learned that Gronkowski’s injury was nothing more than a deep bruise, which saved his season as well as the hopes of everyone who will be counting on him in the coming weeks to help this team win another title. 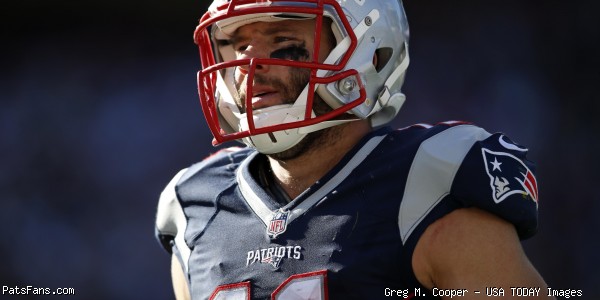 If Patriots wide receiver Julian Edelman gets hurt a few weeks later, the Patriots might not have gotten him back in time for the playoffs.

The timing of Julian Edelman’s Injury – The tone heading into the postseason might be a little different right now had it not been for the fact that Edelman’s foot injury occurred in Week 10 and not later in the season.  Edelman’s injury happened at the end of the first quarter against the Giants and the timing was significant because if it happens even a couple of weeks later, Edelman could have potentially ended up in injured reserve and it’s safe to say that the tenor of everyone’s outlook might be quite a bit different right now toward this offense without the hope of his return in two weeks.

Jamie Collins return and Dont’a Hightower avoiding serious injury – After battling an illness that some reports feared was related to MRSA, the status of Jamie Collins was one of the biggest stories for part of the 2015 season.  It’s obvious the type of player Collins is in New England’s defense as he’s been absolutely everywhere, making tackles, breaking up passes, forcing fumbles, and just creating havoc with Patriots’ opponents.  Paired with Dont’a Hightower, the Patriots have a tremendous linebacker duo as Hightower’s speed and quickness has been another key asset.  Hightower’s injury this season was a concern as many remember how big he was last year.  The veteran linebacker made the game-saving tackle during last year’s Super Bowl that gave Malcolm Butler an opportunity that wouldn’t have come otherwise, and he’s probably one of the more underrated players for casual fans who don’t realize what he does in New England’s defense.  Hightower missed Sunday’s game but is expected to be back, and they’re fortunate that his injury wasn’t more significant because as nice as it is having Collins, Hightower’s loss would be a big one for New England heading into the playoffs.

Devin McCourty’s ankle injury – McCourty goes down as another player who we were fortunate wasn’t lost for the season.  His absence was noticeable last week against New York, as it’s safe to say that game might have gone a little differently given some of the plays that New York made against a depleted secondary.  But he was back on Sunday against the Dolphins and played pretty well, albeit he had a few plays that he’d probably like to have back while battling the 80-degree Florida weather.  He was a key player down the stretch last season and he’ll likely be a key component in a secondary that is young and also has some new players this year compared to last season, and it’s guys like McCourty who can provide a steady presence should they face adversity in the postseason.

Sebastian Vollmer – The outlook seemed relatively grim on Vollmer when he went down, but it sounds like he’s going to be back during the postseason and that has to be music to the ears of Tom Brady, especially after seeing how much pressure he was under in Miami.  The Patriots offensive line is arguably one of the biggest areas of concern heading into the postseason, as it doesn’t matter how many weapons Brady has at his disposal if he doesn’t have time to get them the football.  One of the biggest topics of discussion was how fast he was getting the football out early in the year, but that started to fall off in a hurry as guys continued to get injured.  Hopefully that’s an area that he can regain some success because judging by what we’ve seen recently, he may not have a lot of time to get the ball out of his hands.