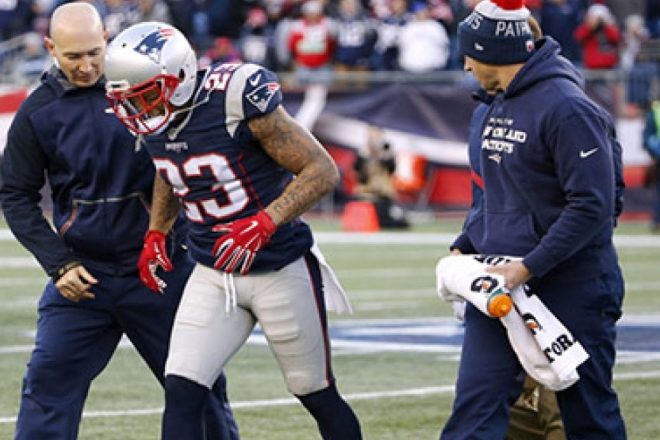 The Patriots spent Sunday dealing with more injury issues, but if nothing else, it looks like they’ll at least have an extra week to get a little healthier heading into the playoffs.

Pittsburgh overcame an early deficit on Sunday and rallied to beat the Denver Broncos 34-27 and it held some playoff implications for New England.  Thanks to the Patriots 33-16 victory over the Titans on Sunday, the Patriots improved to 12-2 and the loss by the Broncos now guarantees that New England can finish with at least the #2 seed and a first round bye in the postseason.

That’s good news for a Patriots team that experienced more injuries on Sunday, with Danny Amendola (knee), linebacker Dont’a Hightower (knee) and safety Patrick Chung (hip) each going down during the game.

Hightower’s injury was one that raised a big red flag given that he finally returned after missing the last two games with a sprained MCL, only to hobble off the field in the third quarter with another reported knee ailment.  The one positive in Hightower’s case is the fact that he later returned and was present on the sideline for the remainder of the game.

Amendola’s injury was reminiscent of the one he suffered out in Denver against the Broncos, with the veteran leaving Sunday’s contest following a 22-yard punt return.  He left the field favoring his knee, and went to the locker room to be evaluated by New England’s medical staff.

With the team without Devin McCourty on Sunday, they were already thin at safety and saw Chung go down after a collision with Brian Bostic.  He didn’t return to the game but sounded upbeat following the victory, Tweeting out “Great Win!!”.

For now, the Patriots will have to spend another week figuring out who will play next Sunday down in New York when they battle the Jets.  If nothing else, thanks to how things played out Sunday, they can at least know that they’ll have time to get guys healthy when they start playing games that will decide whether or not they’ll be able to repeat as champs in February.