7 years ago at 6:36 am ET
Follow @SteveB7SFG
Posted Under: Patriots Commentary 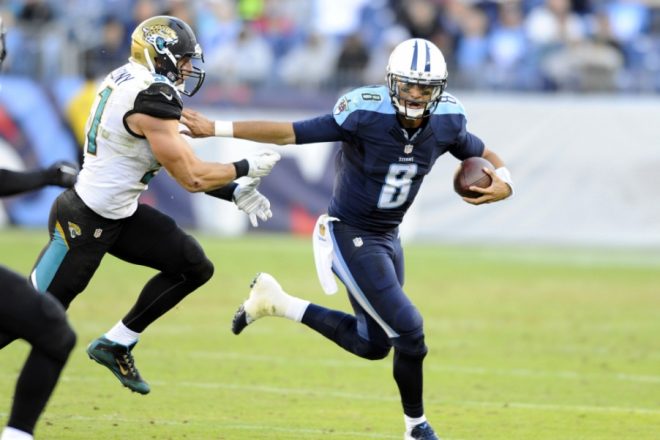 The Patriots return to Gillette Stadium in Foxboro for their final home game of the season to face the Tennessee Titans. The Patriots will finish the last two regular season games on the road as the stadium prepares for the construction of the ice rink for the NHL’s Winter Classic to be played at Gillette on New Year’s Day.

The Titans (3-10) were blasted by the New York Jets 30-8 on Sunday. The Titans lost the chance for consecutive wins for the first time since 2013. Their only score was on a pass from RB Antonio Andrews to QB Marcus Mariota.

The Patriots (11-2), beat the Houston Texans 27-6 to clinch a playoff berth and with the Giants win over Miami on Monday night, the Patriots won the AFC East Division crown for the seventh year in a row and their 13th in the past fifteen years. They now have a chance to clinch a bye on Sunday against the Titans.

The game will be televised by CBS with the announcing crew of Ian Eagle and Dan Fouts.  The game will also be carried by the Patriots flagship radio station 98.5 FM the SportsHub with Bob Socci and Scott Zolak on the call.

The history between the Patriots and Titans stretches all the way back to the early days of the AFL when they were known as the Houston Oilers. The teams have met 40 times with the Patriots holding an all-time 23-16-1 edge overall against the Titans.

The Patriots also hold a sizable advantage at home with a 16-6-1 mark. The last time the teams met was in September of 2012 and the Patriots beat Tennessee 34-13. In case you missed it, the last time Tennessee played in Foxboro was the snow game back in 2009 where the Patriots rolled 59-0.

Here are our five first impressions of the Titans:

Big Shakeup Coming at the end of the year? Tennessee gave a five-year contract to coach Ken Whisenhunt prior to the 2014 season and he was fired this year after a 1-6 start. Interim head coach Mike Mularkey, who had previous stops at Jacksonville and Buffalo as a head coach started off ok with a 2-3 record. But the loss against the Jets where it seemed the team didn’t show up could be a big blow to his staying on.

General Manager Ruston Webster is likely on very thin ice as well. Although the team drafted QB Marcus Mariota just this season, the Titans were expected to be much better and they just haven’t done that.

The 3-10 record puts them in last place in the AFC South, where the division leader is only 6-7. The fact that as weak as the division is this year and the Titans are a full three games back speaks volumes. There could be major changes coming.

Mariota/Walker Have Tenn. on the right track: Rookie QB Marcus Mariota came in with a lot of hype and he’s off to a very good start. He’s completing 62.4 percent of his passes and has thrown for 2786 yards with 19 touchdowns and 10 interceptions. His 91.9 passer rating is really solid especially considering the team’s record, his lack of quality weapons and the fact that he’s a rookie.

Mariota is also very mobile and can move around the pocket as well as pull the ball down and run with it. He’ll be a threat to scramble and move the chains at any time.

Mariota’s favorite target has been TE Delanie Walker; Walker isn’t a traditional type tight end at 6’0, 248 pounds, he’s more of a move-type tight end. He’s played wide receiver while with the 49ers. Walker has 70 receptions on the season, the most of any tight end in the NFL, for 871 yards and four touchdowns.

Walker and Mariota are a dynamic duo and these two will be garnering a lot of attention by the Patriots this weekend. They also should be safe after what promises to be a housecleaning in the offseason.

McCluster/Morgan Lost for the year: The Titans suffered a pair of costly losses adding to an already trying season by losing LB Derrick Morgan and RB Dexter McCluster who were placed on IR.

Morgan was the outside linebacker opposite Brian Orakpo that was supposed to take the pressure off of him and give them a pair of bookend pass rushers. Morgan started well with 4.5 sacks in the first four games, but has been slowed by a bad shoulder that now requires surgery. He’ll be a big loss down the stretch. David Bass played well filling in for spot duty but has struggled thus far as a starter.

McCluster is a scat-back who can do a variety of roles, running the football, catching it out of the backfield as well as returning punts and kickoffs. He had 55 rushes for 247 yards (4.5 ypa) with a touchdown. He also caught 31 passes for 260 yards and a score. McCluster also returned 24 punts for 9.0 average as well as 13 kickoffs with a 21.9 average per return.

In his stead the team will return to Bishop Sankey the top running back picked in last season’s draft. He started off well but has fallen out of favor with the coaching staff. He has 41 carries for 166 yards, 4.0 average and 1 touchdown as well having caught eight passes out of the backfield for another score.

Dick LeBeau’s defense was playing well but has struggled lately: The former Steeler defensive coordinator LeBeau is now in his first season in the same position with the Titans.

The Tennessee defense definitely has his stamp on things; they play an aggressive 3-4 scheme with active linebackers that like to come on the blitz.  While they’ll miss Morgan, Orakpo is their most prolific pass rusher with seven sacks followed by DE Jurrell Casey who plays on the same side with six. ILBs Wesley Woodyard and Avery Williamson are frequent blitzers as well up the middle. The Titans have 35 sacks on the season.

The Titans are middle of the road defending the run which is a huge improvement over 2014 and are 11th overall in yards allowed with 344 yards per game. But their corners can be a liability in coverage, they miss Jason McCourty who is on IR and the middle of the field in the passing game can be an attractive target for opponents. The Titans are allowing a whopping 8.1 yards per pass attempt with opposing QB’s having a passer rating of 102.2 against them.

Limited Weapons have hurt Tennessee’s Offense: The Titans offense struggles with the lack of playmakers for Mariota. They really miss WR Kendall Wright who gives them a second quality target with Delanie Walker. Wright can at least put defensive game planners in the position of having to account for them.

Harry Douglas the former Falcon and Dorial Green-Beckham are the other two wide receivers. Green-Beckham has the ability to go deep but has only caught 24 passes for 415 yards with three touchdowns. Douglas has 26 catches for 298 yards and two scores.

Their lead running back Antonio Andrews has good size at 5’10, 225 pounds but has had only so-so production with 127 carries for 474 yards, good for only a 3.7 yard per attempt average and just three touchdowns. With McCluster on IR, Sankey will have to pick up the slack. But there is no doubt they really need Wright back in the lineup.