7 years ago at 9:11 am ET
Follow @IanLogue
Posted Under: Patriots Commentary 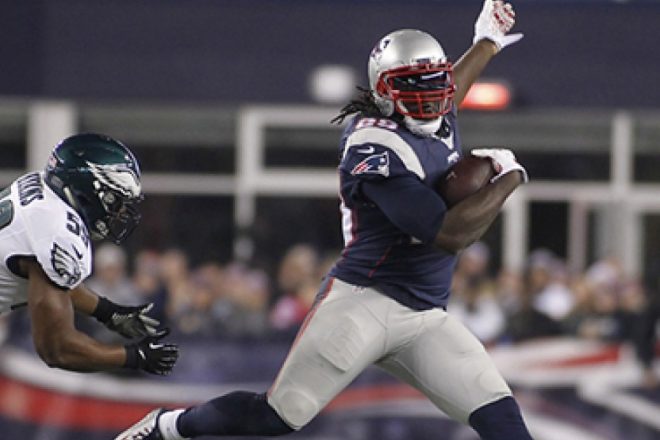 Sunday’s loss to Philadelphia was disappointing but there were some positives to take away from the game as well as some other reasons to wonder about certain players as the Patriots start getting ready for the final four weeks of the season.

Here’s a quick rundown of some things we learned from Sunday’s loss to the Eagles:

1) Despite the Loss, It Was an Important Game for James White – Running back James White had a productive afternoon out of the backfield, catching 10 passes for 115 yards as well as a touchdown against the Eagles and he looks like he’s starting to gain some confidence.  White finished the afternoon with a third of New England’s 18 passing first downs, with six of his ten receptions moving the chains.  Brady was 3-of-3 targeting him on third down along with two first downs, and White also made a key fourth down play in the fourth quarter that helped set up the Patriots fourth touchdown of the afternoon that put them in position to nearly pull off a come back.  The team might have lost the game but it’s the type of performance that will likely pay dividends down the road for the offense if White can build on it.

2) WR Keshawn Martin Has Serious Potential in this Offense – Watching Martin’s route-running and his tenacity for the football is something that quietly stood out on Sunday and it’s pretty clear that Tom Brady agrees.  One key attribute with Martin is he’s a player who fights for the football and isn’t afraid to go up to try and get a pass that might not be perfectly thrown his way.  We saw it several times on Sunday and it’s obvious that he’s earned Brady’s trust because the veteran quarterback doesn’t seem to be afraid to take a shot at taking chances throwing him the football.  He’s a player who in addition to his great route running, has great hands and if he can continue to develop, it will round out a group that is in need of one more receiver who can hopefully be a productive addition to the offense.

3) Danny Amendola Doesn’t Get Enough Credit – Watching Amendola on Sunday was just a reminder of how underrated he really is as a player in New England’s offense.  The veteran receiver had a great afternoon in his first game back, hauling in seven passes for 62 yards along with a touchdown and just overall was a player who forced Philadelphia to constantly be accountable for where he was.  He’s incredibly athletic and such a valuable part of this offense, and kudos to him for reworking his contract over the offseason to try and help this team win another championship.  It’s been said before, Amendola is a difference maker and barring a complete meltdown over these final four weeks, he’ll likely be a player who helps them win games in the postseason again this year once Rob Gronkowski and Julian Edelman are back on the field opening up opportunities for him again to make even more plays.

4) Something isn’t right with LeGarrette Blount – The fact that the Patriots haven’t relied too much on Blount this season is starting to come into focus and Sunday’s game against the Eagles was a startling reminder that the veteran back doesn’t look like himself this season, and that’s a bit unsettling heading into the final stretch.  The play where he ran into Brady after seemingly going the wrong way on the hand-off was alarming, and truthfully Blount doesn’t seem as explosive as he’s been in past seasons and seems like he’s running as fast as he can while moving in slow-motion.  The one positive is Blount still possesses power and he remains a threat once he gets out into the second level.  The bad news is there doesn’t seem to be a lot of burst from him this season and considering how important it will likely be in the playoffs to be able to run the football, he doesn’t look like he’s as up for the challenge physically as he was the past two seasons.  Needless to say that will be something to keep an eye on over the final month of the season.

5) Brandon LaFell Is Still Having a Hard Time – It’s hard not to root for Brandon LaFell after watching him passionately support his team via his Twitter channel during the early part of the season while he was sidelined on the PUP list, but he’s still not quite himself.  The veteran had some rough moments on Sunday including a big drop in the fourth quarter and seemed like he wasn’t always on the same page with Brady or the offense.    The good news is the Patriots still have a month for him to hopefully improve in that area as they try and start making a run toward locking up a top playoff seed.  The bad news is it’s going to be a problem if he doesn’t come around because it took production from everyone in the playoffs last year to win it all, and Brady is going to need him to get back to being the player he was last year.

6) Patriots Defensive Line Looks Solid – Who would have thought a defensive line without Vince Wilfork could be a group that would look as formidable as this one does, especially now that they’re finally getting healthy?  Jabaal Sheard had a strong performance on Sunday,  finishing with three tackles including one for a loss as well as a pass defensed, while Malcolm Brown also had a good afternoon while combining for two tackles including one for a loss and a fumble recovery.  Between what we saw from those two players, as well as Alan Branch and Sealver Siliga (each finished with two tackles) the Patriots have a pretty good group.  If they can get absolutely everyone healthy, it shouldn’t be a group to be worried about heading into the playoffs.

7) The Patriots squandered a good performance by their defense – Lost with the outcome on Sunday was the performance by New England’s defense, which overall did about as much as you could have hoped for against Philadelphia.  They held quarterback Sam Bradford to just 14-of-24 throwing the football for 120 yards, with both Darren Sproles and Jordan Matthews each finishing the afternoon with 34 and 36 yards receiving respectively.  On the ground they allowed 128 rushing yards, but held Philadelphia to mostly short carries and also had six tackles for a loss.  Sunday’s game was lost on special teams (blocked punt for a TD, punt return for a TD) and a critical offensive turnover (99 yard interception return for a touchdown), which accounted for 21 of the Eagles 35 points.  The return of Jamie Collins (he lead the team with eight tackles including a pass defensed and a forced fumble) was huge and this is a team that will hopefully have Dont’a Hightower also back in the line-up in the weeks ahead.  They’re really beginning to play well, and it’s a shame the team didn’t benefit from it Sunday.