7 years ago at 12:58 am ET
Follow @IanLogue
Posted Under: Patriots Transcripts 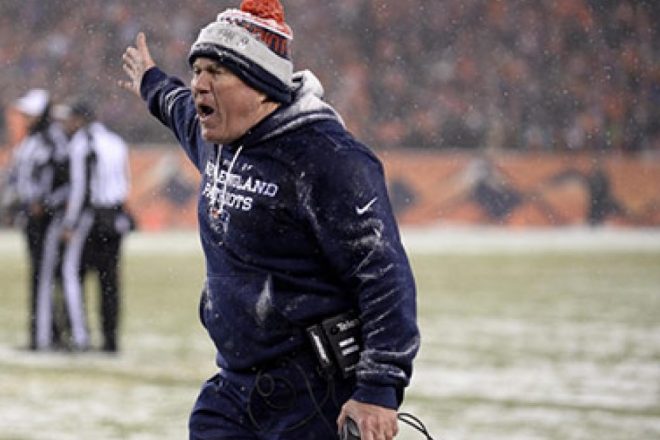 Really proud of the way our team fought tonight.  I thought we gave tremendous effort and played really hard.  Obviously there were some things that way we could have done better, could have coached better, could have played better but guys really played hard and I have all the respect in the world for this football team the way they competed.  So, proud of the way they went about it tonight, disappointed in the result, but we’ll have to get back to work this week for Philadelphia.

I have no updates.  I don’t have an update

On the offensive pass interference call and if he can articulate what the refs are looking for:

On if he can talk about the setback to their offense if Gronkowski’s out for an extended time and how they manage from this point on:

Yeah, I don’t know.  We’ll work on that this week.

On from a personal standpoint, after everything Rob has given what his emotions are seeing him like that:

Well, what do you think?

On the fact Brady talked about guys going low, that’s just the way football is played now, and if he sees any problem with that type of tackle:

Look, I’m not going to talk about the play.

On what Scott Chandler did on the final drive to help set up the field goal to force overtime and how he stepped forward:

I would say that about the whole team, they competed hard, competed all the way.  They fought hard, all of them.

On if there was any confusion about the clock at the end of the game:

On if he sensed a momentum shift after Chris Harper’s muffed punt:

On his thoughts on how the Broncos played with a young quarterback:\

I mean, it was a very competitive game.  Both teams played hard.

On if he knows if they’ll run any tests for Gronk tomorrow at this point:

I just walked off the field.

On how hard it is emotionally after a game like this:

On how much of a factor the weather conditions played in the game: