7 years ago at 6:57 am ET
Follow @SteveB7SFG
Posted Under: Patriots Commentary 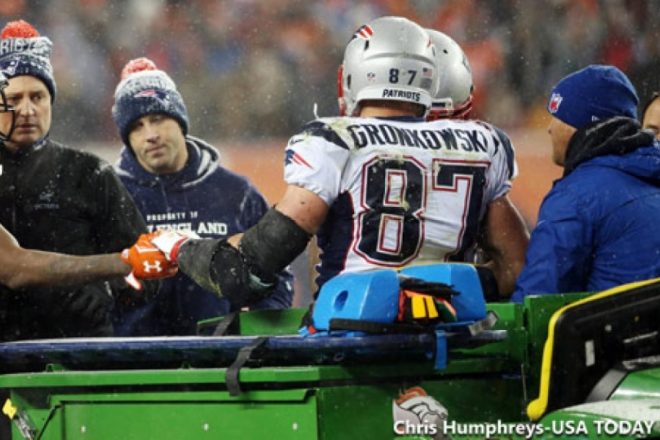 The Patriots dropped an overtime loss in Denver to the Broncos Sunday night 30-24 as C.J. Anderson rumbled 48 yards for the game winning touchdown on a third and one after the Patriots had stalled.

The loss ended the Patriots winning streak in 2015 at 10 but the bigger loss is that of tight end Rob Gronkowski who went down with a knee injury in the fourth quarter.

Anderson and Ronnie Hillman combined for 179 yards on the ground as the Denver rushing attack gave the Broncos the ability to control the flow of the game and kept them around for a fourth quarter comeback.

The Patriots led 21-7 in the fourth quarter and seemingly had the game under control until Chris Harper muffed a punt that Denver turned into a touchdown by Anderson that ignited the Broncos and the crowd.

Denver surged back for a go-ahead touchdown with Brock Osweiler hitting Andre Caldwell in the end zone for a three-yard score with just over a minute to go. That set the stage for Brady to mount a desperation drive that culminated with Stephen Gostkowski booting a 47-yard field goal that sent the game into overtime.

The loss still leaves the Patriots at the top of the AFC at 10-1 with both Cincinnati and Denver at 9-2. The team still has a comfortable four game lead in the AFC East as the nearest competitor the Jets sit at 6-5 and the Patriots hold the tiebreaker against them. So the loss of the game means less than the potential loss of their biggest weapon on the offense.

QBs play well: Brady and Osweiler ended the night with similar numbers; the Broncos’ starter in his second game in for an injured Peyton Manning completed 23-42 for 270 yards with a touchdown and an interception. Brady finished 23-42 for 280 yards with three touchdowns and zero interceptions.

On a cold night with blowing snow, both quarterbacks threw the ball well and it seemed that the weather conditions wasn’t a big factor other than perhaps slowing the pass rush of each team a bit. Osweiler pass to Emmanuel Sanders to the Patriots ten-yard line in the closing minutes was an absolute beauty. His best pass of the night.

Offense Takes Another (Big) Hit: With the loss of Gronkowski the Patriots offense, if he’s out for any length of time reverts to early training camp mode. Brady’s top four targets in 2015 will be out and they’ll be looking for someone to step up.

Going from a quick strike multi-dimensional attack to searching for someone to step up; without Gronkowski et.al this unit becomes a plodding offense and there will be no more explosions of points. Josh McDaniels and Bill Belichick are the best at putting players in a position to succeed. They’re going to have to be even better now.

Without Dion Lewis, Julian Edelman and Danny Amendola, they lost their quick, off-the-line  players who can beat coverage off the line and allow Brady to throw it in less than two seconds which was tearing teams up early in the season.

They were searching for matchups and tried to attack the Broncos linebackers with deep shots down the sidelines with throws to Scott Chandler and Brandon LaFell as well as a wheel route with Brandon Bolden. Some worked better than others (Bolden’s 63-yard TD catch) but it is simply a case of them trying to search for the best case scenario.

Losing Gronkowski for any length of time, (reports were circulating after the game that it wasn’t a serious injury), takes away the game’s biggest mismatch. No one in the NFL has the combination of size, strength and athleticism at the tight end position that he does. Which is why with the loss of the players listed above, teams have been doubling him and covering him at times with their better cornerbacks with safety help.

Another Not-so-stellar night for Refs: This officiating crew was just another example of what is becoming an embarrassment for the NFL. With the crew letting the players play for the majority of the game, there were numerous cases of jersey pulling on Gronkowski all game long, the arm bar on Talib that was let slide, but then they call the most ticky-tack holding penalty on the Patriots that wiped out a sack that would have pushed the Broncos back to a third and goal from the 19-yard line, instead to a first-and-goal from the four.

A key holding penalty on Tre’ Jackson wiped a 51-yard pass from Brady to Keshawn Martin in the fourth quarter that would have put the Pats in field goal range. But the hankies were firmly in the refs pockets on a blatant hand to the face of Jabaal Sheard on the Broncos go-ahead touchdown as well as a hold on McCourty on the game-winning touchdown at the line of scrimmage.

But the best (worst) two were the ridiculous offensive pass interference penalty on Gronkowski which wiped out another key first down and the Broncos “fourth” time out where the clock doesn’t stop and precious seconds were allowed to tick away. The call on Gronk was particularly a sore spot with both he and Brady as the QB looked close to drawing an unsportsmanlike penalty which would have been a perfect ending. Bill Belichick was particularly testy when asked of this after the game and said, “Go ask the league, they have all the answers,” when speaking of what is and ISN’T offensive pass interference.

Bottom line is this; there’s no sense in the team arguing about referees and officiating. They didn’t and it wasn’t the reason they lost (more to that below), but it would be nice to see a “level playing field” when it comes to how they’re calling these games. Be proud Rog….

Rush Defense gashed: Coming into this game, one of the keys we looked at the was the run offense that was transforming under Osweiler. It was similar to the offense that the Ravens ran, and gave the Patriots so much trouble with last year.

With Peyton Manning under center, primarily in the shotgun, the rush offense stifled and was largely ineffective. Now with Osweiler under center, the stretch plays and the bootlegs have been much more effective. Hillman and Anderson ran them to perfection and although the Patriots run defense came in allowing only 88.8 yards per game, they were gashed time and again.

Once again, injuries played a big role in this one and moving forward. With their top two linebackers missing, Jamie Collins missed his fourth game in a row with an illness and Dont’a Hightower left the game with a knee injury and didn’t return the run defense suffered. Although Jerod Mayo and Jonathan Freeny filled in well, they don’t possess the athleticism and power that Collins and Hightower  do.

Hopefully (this refrain is getting old), Hightower won’t be out long and the illness that sidelined Collins for a month is gone and they’ll be back on the field. One bright spot in the Broncos game was the play of Alan Branch. He was penetrating on the inside rushes all night long and had a nice night of pushing the pocket inside on the passing downs, getting his hand on a couple of throws by Osweiler. Jabaal Sheard had another big game as well as he’s seemingly completely healthy again and a force on the edge.

Ryan Stellar on Thomas: Patriots cornerback Logan Ryan had the unenviable job of guarding the Broncos leading receiver Demaryius Thomas on Sunday night.  And he was outstanding; Ryan shadowed the Broncos talented and explosive wide out all night long and had him at zero catches for the first 11 passes that Osweiler threw his way.

On the Broncos go-ahead drive, Thomas out-leapt Ryan for a big 36-yard gain that put Denver at midfield but once again Ryan had tight coverage on the play. Ryan was also beat on the go-ahead touchdown by Caldwell but it was perfectly thrown pass by Osweiler in a tight window.

Ryan has been a very solid contributor all season long and his play on Sunday night drawing Thomas was by no means an ordinary assignment. Had things ended differently for the Patriots, Ryan would be talked about as one of the key players of the game.

By: Robert Alvarez
Check out the Patriots mini-documentary highlighting Richard Seymour's football journey to becoming a Hall of Fame player.
35 mins ago

By: Ian Logue
Patriots news for Monday 8/8 along with some additional team notes.
4 hours ago