7 years ago at 9:28 am ET
Follow @SteveB7SFG
Posted Under: Patriots Commentary 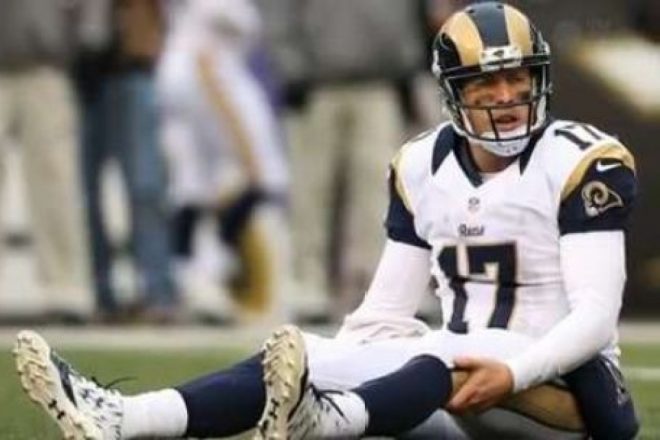 The NFL will not punish the Rams for badly mishandling the concussion protocols of QB Case Keenum last week during a game against the Baltimore Ravens it was announced today. ESPN’s Adam Schefter broke the story thru sources earlier this morning.

Keenum was injured last week with less than a minute and a half remaining in the game. Baltimore’s Elvis Dumervil had jumped offside, the play continued and on the subsequent QB hit by Ravens DE Timmy Jernigan, Keenum fell back and his head bounced hard off the turf.

During the ensuing officials’ discussion, Rams training staff personnel came onto the field and examined Keenum. Although he was clearly dazed, Rams trainers left him in the game and on the field. The league’s concussion protocol official on-hand was apparently asleep at the switch as they didn’t call for Keenum to be removed for evaluation either.

The obvious gaffe by NFL and Rams officials resulted in a conference call with between the league and all 32 NFL training staffs on Tuesday to discuss proper procedures in dealing with these type of issues.

It shoudl be mentioned that perhaps the proper procedures would have been conducted differently had the coach of the Rams (Jeff Fisher),  not been a member of the NFL Rules Committee. And the fact that the officials on hand as well as the Rams not being punished is a joke that the NFL is looking for an “equal playing field” in terms of punishment.

How could the Rams trainers NOT know Keenum was concussed? And watching him struggle to regain his feet, why didn’t the officials on-hand stop play and have him evaluated? The fact that his concussion was bad enough to warrant that he miss this week’s game with said concussion and be replaced by Nick Foles, shows the Rams training staff is either inept or flat out lied. It also speaks volumes about what a mess this is for Roger Goodell and the league.

On the week that family of HOFer Frank Gifford announced that he suffered from CTE, the league’s continuing mantra of “player safety” rings very hollow.

And it is no surprise that the league leaked this information out on Sunday morning just before the games today to minimize the potential fallout from this latest fiasco.

Fans in New England are already all over this one on social media claiming and apparently rightly so, had this been Bill Belichick and the Patriots, there would already be a “gate” attached to this and the cries of foul would be heard calling for fines, suspensions etc.

If there was ever a case for a team being punished for violating the concussion protocols, this is it. It practically screams out for at a minimum, a hefty fine. It is long past time for a regime change on Park Ave for the NFL. And this non-punishment is clear evidence that the punishment policies of the Goodell administration continue to be arbitrary and fatally-flawed.