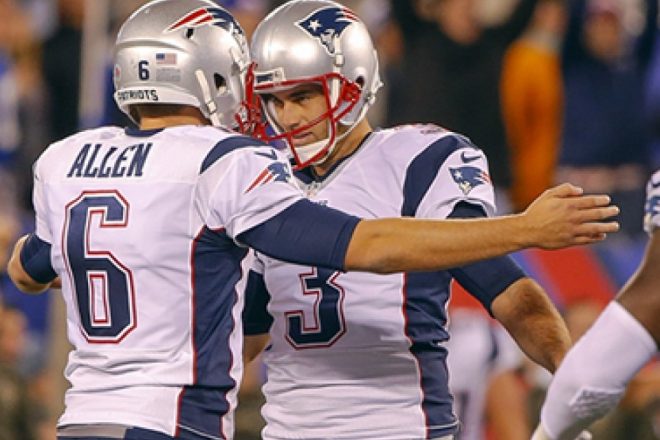 Here’s how the Patriots graded out in week ten. —

The Patriots began the year on a tear, torching opposing defenses week-to-week, but the unit has been slowed the last two weeks. Of course, injuries to key players have played a large role in that decline. Sunday’s performance was mediocre for this team.

Tom Brady looked human, which is rare, while he had some success, it looks like the offensive line shuffling and injuries to some of his reliable playmakers (Julian Edelman, Dion Lewis) is beginning to effect him mentally. Three sacks and two turnovers took the unit out of sync.

The injury to Edelman clearly threw a wrench in the offense. With Rob Gronkowski and the tight ends being called upon to help block, given the state of the line, the unit is simply more limited than they were a few weeks ago.

The running game wasn’t much to brag about either. A total of 77 total yards for the team on the ground, led by LeGarrette Blount’s pedestrian 66 yards on 19 carries (3.47 average per carry).

It wasn’t smooth, it didn’t look easy, but to their credit, the unit still put up 27 points.

Going into the contest, many expected the Giants to provide a tough test for New England’s defense. New York showed up to play and gave the Patriots defense plenty of trouble Sunday.

The most disappointing play was New York’s second from scrimmage, when Eli Manning hit Odell Beckham, Jr. for an 87-yard touchdown. He beat Malcolm Butler and Devin McCourty took a terrible angle, colliding with Butler, to let Beckham scream down the field for an easy score.

Butler had a terrific performance overall, showing his fearlessness and confidence throughout the contest. The rest of the secondary, however, had a rather forgettable day. McCourty played as poorly at the safety position as he has since switching from cornerback. Manning was able to move around in the pocket comfortably too often, picking the backend of New England’s unit apart for 361 yards.

With Jamie Collins out for a second straight week, Jonathan Freeny was exposed and it’s clear he cannot be a full-time player for this defense. Cornerback Justin Coleman, who’s had some bright moments going into the game, was benched for Rashaan Melvin and it didn’t go much better.

There were some bright moments, though. Chandler Jones continues to show development, using his length to leverage opposing offensive lineman and getting pressure off the edge. Rob Ninkovich’s strip sack in the fourth quarter was one of the biggest plays of the game.

Malcom Brown and Dominique Easley also flashed in the middle of the defensive line, pushing the pocket at times. New England’s defense kept the Giants’ using attack in check, limiting New York to 80 yards on the ground.

It’s hard to imagine giving any other grade to the special teams unit. Let’s start with the Stephen Gostkowski 53-yard field goal to win the game. In a word, clutch. The highest paid kicker in the NFL showed why the team backed up the brinks truck to him in the off-season. The offense put him in position, his number was called and he didn’t blink.

Now, back it up a little. Danny Amendola’s punt return was one of the biggest plays on the evening. If Duron Harmon doesn’t accidentally trip Amendola, it’s a huge score. Luckily for Harmon, the offense punched it in anyways. I’m not sure New England wins without that play. The offense was out of rhythm and New York’s defense had found some swagger. Game changing play by Amendola who continues to step up in critical moments.

This is one of the rare times the overall grade is actually much higher than the individual units. As a whole, this is a huge win for the Patriots. New England advances to 9-0 on the year, surviving a tough road game in East Rutherford, NJ against one of their more stubborn opponents in the New York Giants.

The Patriots were shorthanded, battling injuries and overcame some sloppy play for the second week in a row. Despite not being at full strength, they made the plays that needed to be made in order to win. At the end of the day, that’s what makes this team one of the league’s best.

Up next, a Monday Night Football showdown against division rival Buffalo Bills and Rex Ryan. Should be a fun week.

READ NEXT:
MUST READ: Rob Gronkowski Twitter AMA With Fans
Posted Under: Uncategorized