7 years ago at 6:17 am ET
Follow @SteveB7SFG
Posted Under: Patriots Commentary 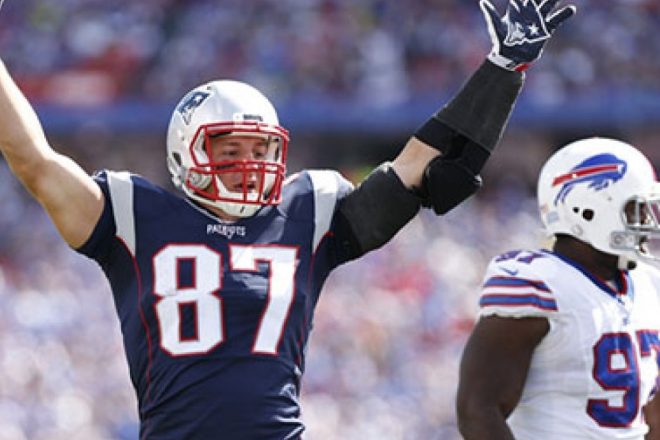 The Patriots begin their early Week 4 bye week and while the team’s 3-0 record and how they’ve played thus far is a positive, they still have a long way to go.

Bill Belichick on Monday summed it up to the media as “no big deal”, that the team is undefeated heading into an early break. However, it is a big deal in how they’re playing in 2015, especially with the offense.

Flashback to Week 4 last season and this offense was still searching for its identity. A second half melt-down in Miami followed by lackluster showings against Minnesota and Oakland were not filling Patriots nation with confidence. Then came the disastrous Kansas City game.

That was the nadir of the season but things quickly turned around from there. Blowout wins over Cincinnati and Buffalo got QB Tom Brady untracked and the return to full health of TE Rob Gronkowski was a huge factor. The team finished 2014 with the number 4 offense in the league.

This season despite having three rookies along the interior of the offensive line and rotating the linemen nearly every series as well as missing WR Brandon LaFell (PUP), the offense is rolling along.

Brady/McDaniels Never Better: The play of Tom Brady this season has been nearly off the charts. It is almost inconceivable that a quarterback can be so effective at 38 years old but not only is his focus razor sharp, there isn’t a hint of drop-off in the velocity of his passes.

Brady and Offensive Coordinator Josh McDaniels have never been better at not only coming up with a game plan but now they make adjustments on the fly much quicker and the results can speak for themselves.

A year ago an ill-conceived piece was written that Brady was “in decline” and that he’d only get worse as time moved on. Brady defied that and put up a fantastic season followed by three extremely impressive playoff performances. He capped it off with a Super Bowl finish for the ages. Through three games in 2015, he’s been ever better.

OL Play a plus: Rookie draftees Tre’Jackson and Shaq Mason as well as UDFA David Andrews have been playing very well thus far in the season. The team has been rotating different combinations in and out seemingly every series. You’re not supposed to be successful offensively doing that, but the team seems to be thriving regardless.

It hasn’t been perfect, but it never is. But big time kudos have to go to former OL coach Dante Scarnecchia who scouted these players closely and he can recognize players that the team and current OL coach Dave DeGuglielmo can work with and will function well in this system.

Dion Lewis a steal: When the Patriots signed Lewis to a futures contract last winter, it was considered a ho-hum signing and not much of anything was made from it. Well that may have been the steal of the year. Lewis is leading the team in carries with 30 and is third on the team with 15 receptions in the passing game.

The Patriots recognized something in Lewis this spring, shiftiness, the ability to make opponents miss tackles and they have been rewarded with some outstanding play in the first three games. Much was made of the loss of Shane Vereen and the question of who would replace his production in the passing game. Lewis has been playing better than anyone would have imagined.

Coupled with LaGarrette Blount, the team has two backs that complement each other perfectly. Blount is a big, bruising back that can sledgehammer opponents at crunch time and Lewis is a quick, shifty runner who isn’t afraid to run inside, despite his size and is a good receiver out of the backfield.

We saw this working quite well on Sunday; Lewis played nearly all of the snaps in the first half and was a big factor both running and passing. With a big lead in the second half, Blount played the majority of the snaps and pounded his way to three touchdowns.

Wide Receiver Position Rounding Out: Much like last year, 2015 opened with questions about the depth of the wide receivers. Brandon LaFell opened the year on PUP and Julian Edelman and Aaron Dobson missed significant time during the preseason with injuries.

But they’ve returned healthy and have been contributing, Edelman in particular has followed up his outstanding 2014 postseason with an equally impressive start to 2015. Dobson, with questions about his health still lingering, has gotten off to a good start as well.  Danny Amendola finished last season on a high note and has played well albeit in a more limited role than the others.

The team traded for WR/KR Keshawn Martin from the Texans just two weeks ago but his familiarity with the system has served him well. Houston under former Pats OC Bill O’Brien run a similar offense and Martin is picking it up quickly.

He played 36 snaps against the Jaguars on Sunday in his first action and contributed 3 catches for 33 yards and a touchdown. The fact that he’s contributing so quickly is an encouraging sign given that the Patriots system is notoriously hard to pick up.

Once LaFell returns, the team will have the enviable position of having to find meaningful snaps for all the receivers. Depth is in the form of practice squad players, rookie Chris Harper who shined in training camp and former Pats receiver Kenbrell Thompkins who was re-signed after being released from Oakland.

Gronk is in a class alone: The Patriots tight end position is a deep one with four players on the active roster. But the conversation always starts and ends with Rob Gronkowski. There is no finer tight end in the game today; not only is he extremely difficult to cover in the passing game, mixing in a mixture of physicality and athleticism, but  he is a devastating blocker in the running game as well.

He’s been as close to uncoverable as a player can get in the early going as he and Edelman are Brady’s favorite go-to guys. He’s been so good that this year’s free agent signing, Scott Chandler has been a mere after-thought so far in the passing game. Look for that to change in the weeks ahead as the team will find a way to get both more actively involved.

Michael Williams and Michael Hoomanawanui round out the position and are mainly used as blockers. But with Gronk and Chandler, the team is set, especially in the red zone where they’re matchup nightmares.

The Patriots offense is averaging almost 40 points per game in 2015 in the early going. They’re functioning much higher than they were at this point a year ago. Knowing that Bill Belichick’s teams pride themselves on playing their best football after Thanksgiving, it is a scary proposition for the rest of the NFL. But this offense can be even better.