7 years ago at 5:45 pm ET
Follow @bob_george
Posted Under: Uncategorized 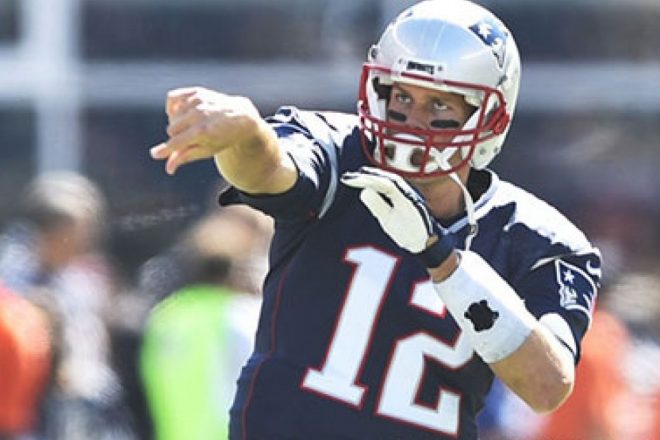 If you like the Patriots, that’s pretty much what you saw on Sunday at Gillette Stadium.

Granted, the Jacksonville Jaguars won’t remind you of the Vince Lombardi Packers or the Bill Walsh 49ers. But in a game where the Patriots could have come out flat against a team they are tons better than on paper, the Patriots made almost no mistakes, showed tremendous patience and surgical precision, and methodically disposed of the Jaguars, 51-17. Singer Roberta Flack would have been proud of the Patriots; Jaguars head coach Gus Bradley could have left the field singing “killing me softly…”.

Perhaps the most telling stat of the game is that, except for the final drive which featured two Jimmy Garoppolo kneel-downs, the Patriots scored every time they had the ball. Nine drives, six touchdowns and three field goals. This right here pretty much explains the total domination of the Jaguars by the Patriots, but it goes further than that.

Lost in the shuffle were three milestones established today by various Patriots. Tom Brady threw two touchdown passes, the first of which gave him 400 for his career and only the fourth quarterback to eclipse that total. Stephen Gostkowski connected on his 423rd consecutive point after touchdown, a new NFL record. Also, the Patriots tied a team record with 35 first downs in the game.

Back to the domination. The game was never spectacular, never brutal, never bombastic. It was a game that was more like a comfortable, feel-good family movie. It was decidedly benign, mostly unremarkable except for the milestones, and just nice to sit and watch if you are a Patriot fan. The Patriots didn’t humiliate the Jaguars, they just beat them. Brady perhaps didn’t break a sweat, although he was sacked twice.

The key word here is methodical. Six Patriot offensive drives went for seven or more plays, and four of them were ten plays or more. This may have been the most definitive example of patient football ever seen. This was a Jaguar team which the Patriots, if they had wanted to, could have dropped 60 and even 70 or more points on. Instead, Brady just simply ran plays and never really overextended himself or tried to look flashy.

Jacksonville helped out a great deal with a very vanilla offense much of the game. Blake Bortles, the third draft pick last year out of Central Florida, showed flashes of future brilliance but otherwise didn’t display much of anything to cause a Patriot fan to worry about this team in the next 2-3 years. He was 17 of 33 passing for 242 yards, two touchdowns, one interception and an 83.1 passer rating. He is tall, big (6-5, 240 pounds) and has a cannon for an arm, but he never really showed off what he is truly capable of.

LeGarrette Blount had three rushing touchdowns to go along with 78 yards rushing on 18 carries. Again, he looked good but not spectacular. His longest run was 22 yards and most of his yardage was on short runs. All three of his touchdown runs were from one yard out.

This sort of win could bode well for the Patriots down the road, although they have a bye next week before heading to Dallas in two weeks. The Patriots didn’t flaunt their superiority, they just showed it. The Patriots didn’t infuriate the Jaguars, they merely imposed their will in a quiet way. Nobody got hurt, nobody committed any stupid penalties, nobody disrespected either team or disgraced themselves.

If the Patriots handle the better teams this way, the Patriots will be hard pressed to win less than 14 games. Bill Belichick is a discipline, “do your job” fanatic as is. But if the Patriots can play this incredibly well in a trap game with every opportunity to come out flat and play like they are looking ahead to Dallas, one might want to take a step back and say to themselves, “Wow!”

There really isn’t a lot to be said about this game. Tactically, this game was a complete and total clinic on how to beat an opponent by just playing the game instead of going overboard on schema and strategy. What strategy did the Patriots possibly need other than “don’t screw up” and “don’t be stupid”? Everything went right for the Patriots. The Jaguars did about as well as they could have done given the talent and experience chasm that exists between the two teams.

So the Patriots can now pack their bags and head home or head out on vacation. Belichick will head back to Nantucket, head out on VI Rings and extract some fish out of Long Island Sound, and work on his golf game. Brady and Gisele (we hope) can head to Cabo with the kids and have a bunch of siestas and fiestas. Rob Gronkowski can go out party-hopping and give us all a reason to check TMZ or YouTube now and then.

Next up in two weeks is a depleted Dallas team that will be without Tony Romo and Dez Bryant. The game is at AT&T Stadium, which is nice in that the Cowboys are a better road team than home team. The Patriots have won their last four meetings with the Cowboys after losing every time they faced Roger Staubach or Danny White.

With the Jets losing to the Eagles, the Patriots are now in sole possession of first place in the division. They are 3-0 for the fifth time in team history. After three games, if you are 3-0, no matter what, you will always take it.

And Belichick will have two weeks to prepare for whatever Dallas has for them. The good times should continue to roll in Foxborough.