7 years ago at 6:00 am ET
Follow @IanLogue
Posted Under: Patriots News 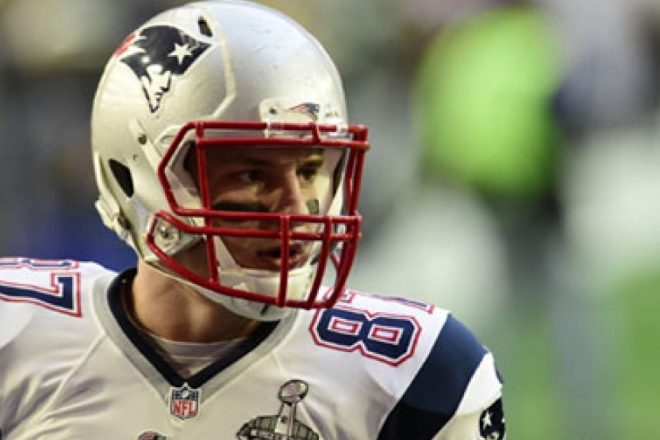 Patriots’ tight end Rob Gronkowski certainly had a monster start to the 2015 season and after what he’s seen on film, Rex Ryan knows he’s got quite the challenge in shutting him down this Sunday.

Ryan spoke with reporters Wednesday and said that in order to completely shut down someone like Gronkowski, it would take someone who, like Gronk himself, is larger than life.

“Shoot, he’d have to look like King Kong or something,” said Ryan. “‘You got him! You’ve got the Gronk!’ Put Kong on him. I’m not going to get into how we’re going to cover him.”

Gronkowski was certainly explosive in week one. The veteran tight end went out and caught three touchdowns last Thursday night against the Steelers, putting his career total touchdown receiving total at 57 which moved him into 5th place all-time. At the time it tied him with Cowboys tight end Jason Witten. Witten caught two Sunday night during Dallas’ win over the Giants, which moved him back ahead of Gronkowski.

The amazing thing about Gronk is the fact he’s only 26 years old and still has plenty of football left and he’s definitely playing at a high-level at this stage of his career. Guys like him certainly don’t come around very often, and quarterback Tom Brady has simply been in awe watching him overcome a lot of obstacles injury-wise that could have spelled the end for most players. Instead, Gronkowski has stayed focused and has never wavered and now he’s quietly becoming one of the best players in the game.

“I think he’s an exceptional player, teammate,” said Brady on Wednesday. “I think his mental toughness with what he’s overcome the last few years to be back out there and be the kind of force that he is on the field is pretty remarkable. To overcome the back surgery, forearm surgeries, the infections and what he went through, to see him go through that first-hand, and then the knee injury and come back last season to put together the season he did, and then this offseason where he was ready to go the whole year, practiced almost every day at training camp, didn’t get to play much in the preseason, but then came out there last week ready to go and make a huge impact on the game.”

“So, he’s just a great player – like I said, a great teammate. He’s a guy that I have a lot of trust in, there’s no doubt about that.”

The Bills obviously know that and unfortunately for Ryan there’s no one on his roster who is King Kong-like enough to stop him.

Mat Franco Blows Gronk’s Mind – (You Need to See This)

If you’re a fan of magic, this video below is definitely one you’ll want to check out because it’s certainly one of the most well-done tricks that has been done, so much so that it even left Gronkowski completely stunned after he witnessed it himself.

Gronkowski appeared on “Mat Franco’s Got Magic” and makes the veteran’s cell phone disappear and what happens next is mind-blowing.

Take a moment and check it out…it will likely leave you just as dumbfounded as he was:

HOYER OUT, MALLETT IN FOR TEXANS

During training camp with the Texans, everything seemed to be going right for Brian Hoyer, so much so, that it appeared he had the starting job locked up and the support of his head coach heading into the regular season.

The bad news is, that support lasted just one game after Bill O’Brien apparently must not have liked what he saw on film following Sunday’s loss and now Hoyer will be replaced this week by fellow former Patriot, Ryan Mallett.

Oddly enough for Hoyer, O’Brien’s support for him was caught on camera during HBO’s “Hard Knocks”, who at the time told Mallett that Hoyer would be allowed to make mistakes and wouldn’t necessarily be pulled at the first sign of trouble.

“What I would expect from you, Ryan, is to be a professional about it, to prepare like a starter, to be ready to play,” O’Brien said via ProFootballTalk.com. “If things aren’t going very well…Look, we’re not on a short leash here, but we’re not going to sit there and let it go eight games of not being very good. You need to be really ready to go.”

Hoyer went out and completed 18-of-34 for 236 yards along with one touchdown and one inteception, but that turnover occurred on his first pass of the regular season, which came at the Texans own 13 yard line. He lead the Texans to a touchdown drive two possessions later, but a three and out, a lost fumble after getting sacked at their own seven yard line and another three and out saw Houston’s defense get no time to catch their breath on the sideline as the Chiefs quickly put up 27 points heading into the half.

He didn’t fare much better in the second half and was eventually replaced by Mallett with 6:10 to go in the game. Mallett would take the Texans down the field on six plays for a touchdown and managed to put together another possession that resulted in a field goal, but unfortunately it wasn’t enough.

“That’s coach’s decision, and I can see why he did that,” Hoyer told reporters after the loss. “It couldn’t have gone any worse. Obviously, I feel terrible. I feel like I let this entire organization down.”

Now the question will be whether or not the change is permanent, or if Hoyer will get another chance. Either way, he’s clearly fallen out of favor with O’Brien for this week.

Speaking of the Texans, the Patriots made a move to acquire one of their players on Wednesday, with John McClain of the Houston Chronicle reporting that New England made a trade to bring McClain to the Patriots.

The former fourth-round pick out of Michigan State doesn’t have much on his resume, registering just 38 catches for 416 yards and three touchdowns. Given the Patriots recent interest in big receivers, Martin doesn’t exactly fit the bill at 5’10”, 190lbs but he did return kicks for the Texans both in the kicking game and returning punts.

If nothing else, the move potentially allows Bill Belichick to keep Julian Edelman and Danny Amendola out of harms way for the immediate future in terms of returning kicks since New England is currently thin at receiver. Brandon LaFell remains on PUP, leaving only Aaron Dobson in New England’s starting rotation. The Patriots also recently brought back Kenbrell Thompson to their practice squad.

After being suspended following the beginning of DeflateGate this offseason, it looks like the guys whose text exchanges made waves in the Wells report are going to get another chance to return to the Patriots after all.

According to the Associated Press, the league has given the Patriots permission to reinstate the two employees, which will allow them to return to work.

“The Patriots have satisfied the league’s requirements for reinstatement and the league has granted permission for the employees to return,” the league said in a statement.

It’s not yet known what roles the two will have when they return, but spokesperson Stacey James didn’t elaborate when asked by the AP what their duties would be with the club.

Brady said recently that he had hoped the two would be allowed to return.

Fortunately they’re back and now hopefully the Patriots are one step closer to putting this whole debacle behind them. 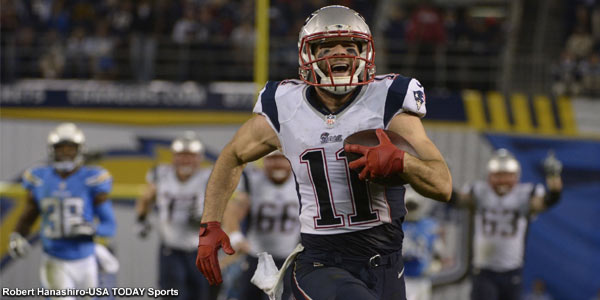 Julian Edelman has obviously heard some of the chatter coming out of Buffalo, but he’s been around knowing that talking a big game will only get a team so far.

Edelman said Wednesday that in the NFL, talking takes time away from preparing and it’s just not something he’s interested in.

“You don’t want to concentrate on what another team is saying,” Edelman said via NESN. “We’re not in high school where ‘rah rah, this guy said that.’”

“This is the National Football League. This is our job. If you’re taking time out of your day to think about what other teams are saying and what’s going on in the outside world, you’re taking away from preparing and ultimately, there’s only 16 games, so every one counts. I’m just going to worry about what I’m going to do.”