7 years ago at 10:45 am ET
Follow @IanLogue
Posted Under: Patriots Commentary 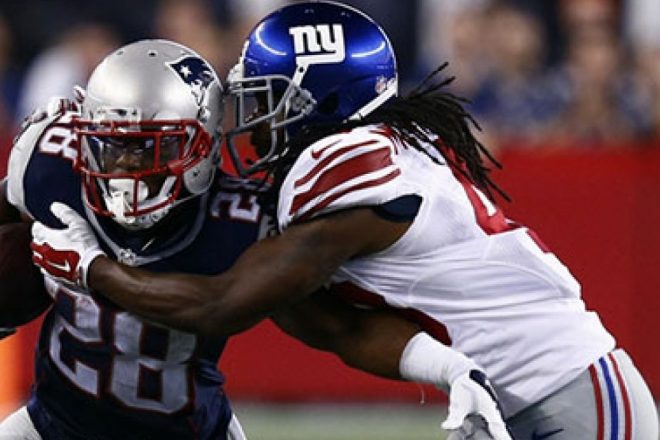 When Jonas Gray found himself on the outside looking in after this weekend’s roster cut downs, the situation at running back for the Patriots certainly became a little more interesting.

The Patriots cutting Gray was somewhat of a surprise after he was seemingly the potential starter with LeGarrette Blount sidelined due to his suspension heading into week one. Even though his breakout performance against the Colts last season managed to get his name on the cover of Sports Illustrated, he overst a week later and seemingly got himself into the doghouse with head coach Bill Belichick and it looks like he never earned his way out. He’s since cleared waivers and as of Monday morning is still looking for a new home.

With Gray out of the mix, the Patriots head into week one with Dion Lewis, Brandon Bolden, James White and Travaris Cadet, with both White and Lewis as two who had the best preseason among this group. White carried 27 times for 71 yards (2.6 avg) along with a touchdown, while Lewis carried 6 times for 24 yards and also had one touchdown. Both were also terrific out of the backfield, with Lewis catching 9 passes for 56 yards with a TD, and White finishing with 7 receptions for 93 yards.

Now the bigger question will be who will open the season behind Tom Brady, and the task will be an important one as the Patriots will face a tough Steelers defense that likely knows the only way to beat New England is to stop Brady. Without a running threat, that job certainly becomes a little easier and White knows that whoever is out there, they need to get the job done.

“Whenever you do get an opportunity out there on the field, you’ve got to make the most of those opportunities,” White recently told the Attleboro Sun Chronicle. “And wherever the team needs you, you’ve got to be there for them. Whatever we’re called to do, we’re going to go out there and try to do it.”

Both backs showed they’re potential candidates to fill in as the team’s third down back as both did a good job, although Lewis was stronger down the stretch and really came on toward the end of training camp. Lewis, who dons the #33 that Kevin Faulk once wore, is a little smaller at 5’8″ than White (5’10”) and has shown some terrific quickness and how he’s utilized, will be one of the things to keep an eye on in the coming weeks.

But whomever it is that ultimately ends up getting the carries, White is just glad to be here and ready to do whatever he’s asked.

“You can only control what you can control, so you go out there, give it your best effort and the decision is in the coach’s hands,” he said. “Hopefully it works out in your favor and thank God it did for me.”