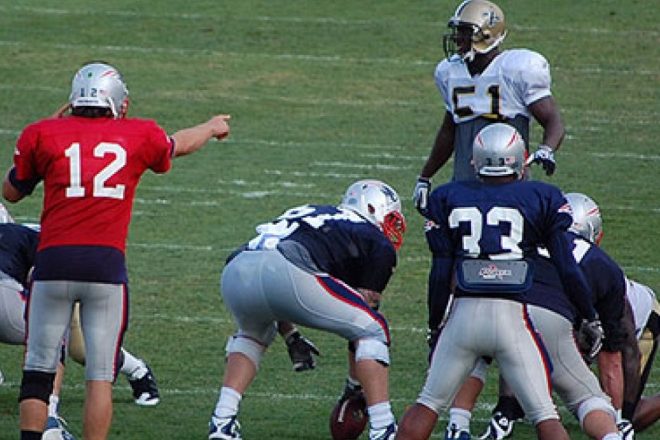 The Patriots are on their way down to West Virginia to conduct two joint practices with the New Orleans Saints on Wednesday and Thursday prior to their preseason game. The Saints have been a frequent partner of the Patriots in these joint ventures, as New Orleans coach Sean Payton like Bill Belichick, is a firm believer in the value of joint practices.

The respect that each coach has for each other is evident in that the teams are looking to improve and will help each other help themselves for the next two days. We’ll get more to that later. But the fact that the teams have worked closely many times with very few issues is a testament to the respect between the two teams unlike the fiasco that Houston had to put up with versus the Redskins last week.

Some coaches, like Packers coach Mike McCarthy isn’t a believer in joint practices, preferring to work on his own with his own team. It was thought that the Patriots attempted to work jointly with Green Bay prior to the preseason game but were turned down.

We’re totally on-board with the joint practice venture. Beyond the fact that on a given afternoon we can watch Tom Brady and Drew Brees do their thing and then walk off to the same sideline and talk between drills is really cool, it just makes sense from a football perspective. Here’s a few reasons why joint practices work.

Situational Football: One of the reasons the Patriots (and Saints), have excelled in certain situations year after year isn’t magic (or some nefarious acts as some hysterical dweebs will have you believe), but the simple fact that they PRACTICE them.

Why is no one better than Belichick and the Patriots in situational football? Practice, practice and more practice. And joint practices are the best place to drive the point home. How many 3rd down and 16s will you face from the opponent 35 yard line in a preseason game? One? None? Well let’s do that and if we don’t like the way it looked, let’s run it again and again. And again if necessary until we get it right. The list could go on and on but the best way to be productive in any situation is to have experience in dealing with it.

Last season, the Sporting News asked Bill Belichick why the Patriots favored joint practices and he had this to say: “We may get a handful of red-area plays in the preseason games. I don’t know, we might not. But we know we’re going to get probably over 25 today. Same thing on third down—I don’t know how many third downs some of our guys who are going to have a lot of playing time during the year are going to get in preseason, but by the end of the week we’ll probably have 30 third down situations here. “

“You just can’t get the reps in preseason games like you can get out here on the practice fields.’’

Veterans Need Work: Last week against the Packers, Tom Brady played a total of seven snaps, Malcolm Butler the same and Rob Gronkowski? Zero. Think how many snaps each will get against a quality opponent in the next two days of joint practice.

This work in a controlled environment isn’t the same as a game but is still invaluable in preparing the veterans to be ready to go once the games become real on Week 1 of the NFL season.

While Brady will get more reps against the Saints in the preseason game than he did last week, he still won’t play much past the first half. But he and Jimmy Garoppolo will each get plenty of reps in the practices.

Different Looks by the Opposition: After facing your own teammates for the past two weeks in practice, the joint practice venture will allow the players, especially the younger ones the chance to react to different looks and schemes that are the staple of your opponent.

It is some great experience to go against a different, spirited opponent and breaks the monotony of training camp practices that all seem to run into one another. It also gives coaches the ability to give longer looks at some of the players on the bubble at an opponent where in a preseason game, that player may only get a handful of snaps.

Since the new CBA of 2011 did away with the old two-a-day practices, coaches like Bill Belichick are always looking for ways to introduce physicality and hitting into practice during training camp and joint practices are the wave of the future.

Once again Belichick was ahead of the curve on this one and the Patriots will no doubt continue to try to use the joint practices as often as they can during the preseason.