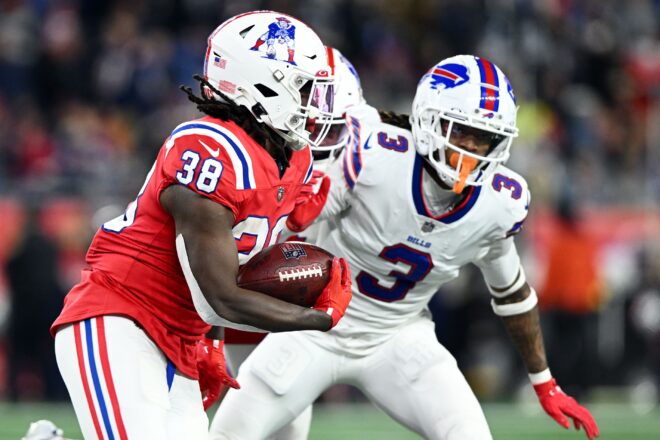 The 2022 season may not have ended the way the Patriots and their fans would have liked, but they might not have been in the position to still make the playoffs in Week 18 without the efforts of second-year running back Rhamondre Stevenson.

It was not always perfect for Stevenson this year, especially after the lateral gaffe in Las Vegas and late-season fumbling issues, but for the first time since LeGarrette Blount in 2016, he became the first Patriot to rush for 1,000 yards in a single season. He finished with 1,040 rushing yards and five touchdowns in 17 games (7 starts) and joins Blount (2016), Stevan Ridley (2012), Benjarvus Green-Ellis (2010), Corey Dillion (2004), and Antowain Smith (2001) as the six backs to record 1,000 yards in a season under head coach Bill Belichick.

“I don’t really think too much about it, but actually one of my linemen came up to me today and told me how far I was away and things like that,” Stevenson said about closing in on the milestone Friday. “It would be a great accomplishment I think for me and just for the team, the offensive line. Just for all of us. Rushing for 1,000 yards in the NFL – I mean, I would call that an accomplishment. So yeah, that would be nice to get.”

In 2022, Stevenson saw a substantial jump in snaps from 24.7% during his rookie season to 66.4% this season. He took over the lead running back job during the absence of Damien Harris, who missed six games. His 1,461 yards from scrimmage are the fourth-highest total in a single season by a Patriot since 2000.

Additionally, Stevenson saw more action as the primary passing back following the retirement of James White and the season-ending injury to Ty Montgomery. He hauled in 69 receptions to lead the Patriots offense. That single-season mark is fourth in Patriots team history behind James White’s 72 in 2019, Tony Collins’s 79 in 1986, and James White’s single-season record of 87 in 2018.

With fellow running back Damien Harris set to hit free agency, Stevenson’s role in 2023 may expand even more.

By: Steve Balestrieri
"the greatest player to play the game, it means a lot. And I think it means a lot to me, too, because this is where…
10 hours ago