4 weeks ago at 8:17 am ET
Follow @SteveB7SFG
Posted Under: 2022 Patriots Regular Season 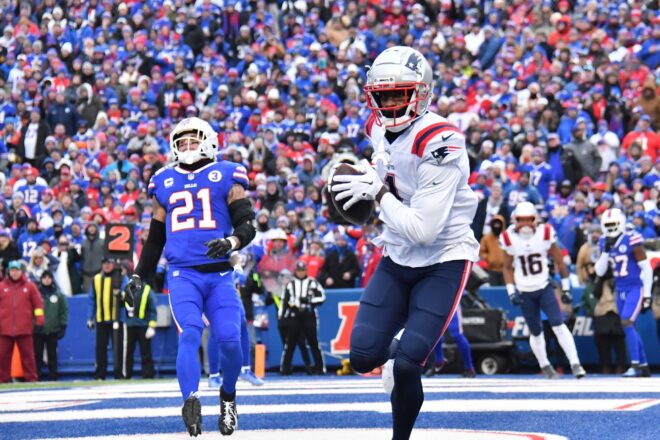 Pats Bid Adieu To 2022, Much Like They Played All Year

Well, we can’t say we’re surprised to see how Sunday’s game played out against Buffalo. Josh Allen has had the Patriots’ number for quite some time, and he continued that on Sunday as the Bills downed New England 35-23.

But 14 of those 35 points came on Special Teams as Nyheim Hines ran back two kickoffs for touchdowns which were a killer. It is hard enough to beat Buffalo as is, but giving up two KO return TDs was too much for this team (and most teams) to recover from.

Allen, however, made some ridiculous throws, the 49-yard TD to Stefon Diggs, which was a frozen rope right into the bucket. It was a beauty unless, of course, you were on the New England sideline.

They didn’t roll over and fought until the end, but that isn’t good enough. For once, the offense played well enough to win. A couple of missed opportunities and some bad calls came home to roost, as they have so often this season.

So, here are my observations from the game yesterday afternoon.

Slater/McCourty Mum on Retirement, But Signs Are There: The long-time stalwarts of the Patriots STs and defense wouldn’t comment one way or the other, whether they were retiring, but all the signs were there.

Slater was sitting at his locker with tears streaming down his face after the game. “A lot going through my mind,” was all Slater would say later on the subject.

Slater got emotional at the podium discussing McCourty. “No one I’ve ever played with has impacted my life more. Simple as that.”

“I’ve given it everything I have,” Slater said. “My dad told me when I was young that if I wanted to play the game there was a certain way to go about it. I tried to make him proud and represent his name the right way because that’s how he did it.”

McCourty said, “Just figuring out what makes me happy, what God has planned in my life. Obviously, I still enjoy playing the game of football, but you can’t play it forever…have to figure out what’s best for my wife and kids and not just me,” McCourty added.

But while nothing is official, David Andrews got emotional when asked about his teammates since he entered the league as an undrafted free agent in 2015. When asked about how the pair have influenced him, he said, “A lot,” and then walked off the podium crying.

The veterans have been outstanding leaders on and off the field, and if this was indeed their last NFL game, then the Patriots will have a big leadership void to fill, among other needs this offseason.

Mac Jones Needs An OC In 2023:The much-maligned experiment with moving Matt Patricia calling the plays did not work. Actually, on Sunday, he called his best game of the year. But one week isn’t going to cut it. Jones’ development took a hit this year, although down the stretch he played much better.

Jones’ play in the first half was outstanding, going 13-16 for 119 yards and 2 TDs. He had three turnovers in the second half, one of which was a bad decision, but desperation time and some bad bounces happen. He finished 26-40 for 243 yards with 3 TDs and 3 INTs for a passer rating of 75.3.

There were some good moments of the day. Going against a very good Buffalo defense, he led the Patriots on three scoring drives of 70+ yards, including two early red-zone trips where they scored TDs on both against Buffalo’s #1 RZ defense. A second half trip should have been extended on a pretty obvious DPI penalty on Matt Milano that went uncalled.

Jones said after the game, that he wasn’t pleased with his own performance in 2022, but that the players continued to fight hard for one another. But changes need to happen in 2023, starting with a new Offensive Coordinator, upgrades at tackle, and a more dynamic receiver. Jakobi Meyers is a free agent and his status will bear watching.

Special Teams Hits Rock Bottom: The game was another bad one for the New England STs units on an epic scale. On a day that the Patriots had to win, and in an emotionally charged stadium, the STs allowed a 96-yard TD, which put them behind just 14 seconds into the game, before Allen and the offense even took a snap.

The Patriots weathered the storm and went into halftime tied, thanks to a Devin McCourty interception in the red zone. In the third quarter, the Patriots took the lead briefly on a Nick Folk field goal. But then the STs folded again. Nyheim Hines took his second KO return for a touchdown back on the day, this one for 101 yards to give the Bills a lead that they would not relinquish.

I don’t know the exact statistics but allowing one return for a TD has to be tilted in favor of the returning team. Allowing two? It has to be astronomical. And for an offensively challenged Patriots team, it was too much to come back from.

The past two seasons, the Patriots STs units have been far from the well-oiled machine that we’ve come to expect. Great individual plays and players abound, but overall, they’ve been bad, and even more so, down the stretch. Something has to change.

Rhamondre Stevenson Finishes Off a Stellar Season: We expected Stevenson to make a big jump in Year 2, but I think he was the Patriots best offensive player in 2022. Stevenson finished the day with six carries for 54 yards (9.0-yard average), and 5 catches for 28 yards.

On the season, Stevenson carried the ball 210 times for 1040 yards (5.0-yard average) and added 69 catches for 421 yards, for a combined 1461 yards on the season. Imagine if he had consistent blocking up front and was able to get to the second level untouched more consistently. He was one of the leaders in the league with yards after contact, tied for sixth.

The Patriots look to be strong heading into 2023 at running back, even with Damien Harris a free agent.

The Patriots close out the season a very disappointing 8-9, and while this team is flawed, they were actually better than their record would indicate. While injuries took a toll, the answer to why they underachieved has to begin with the coaching.

We’ll delve into all of that later on and how they can improve in 2023.

By: Robert Alvarez
Robert Kraft and Bill Belichick Release joint statements about Tom Brady after his decision to retire from the NFL for a second time.
23 hours ago