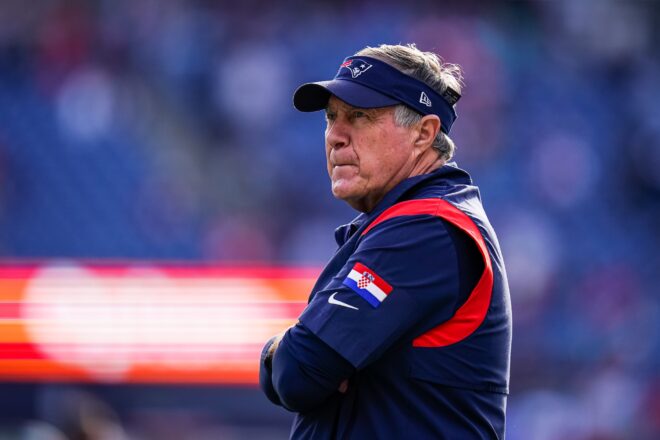 Good morning and Happy Game Day. Today would have Elvis Presley’s 88th birthday, which is hard to believe, so for the rest of us today who were/are big fans, we’re going to continue on “Takin’ Care of Business.”

The last regular season game for the Patriots of 2022. If the Patriots are to play next weekend on Wild Card weekend, they can punch their ticket by winning in Buffalo. They could still back-in with a loss but would need help.

There is no idea how the Bills will respond to the emotional roller coaster they’ve been on all week. They did get some great news late in the week when Damar Hamlin was removed from a ventilator in the hospital. He later recorded a message for his teammates. I am sure that will be played to the crowd just before today’s game.

Buffalo is always a loud, raucous place, even in the days that the Bills even when the Bills were bad. I fully expect the noise to be off the charts today. I think the Patriots will have to weather the storm for most of, if not the entire first quarter. If they can enter the 2nd quarter tied or in the lead, then they’d have a good chance of upsetting Buffalo.

But they can’t get down by much early, or the crowd and the Bills’ emotions will snowball and run them out of the stadium in an ugly loss. But my three keys to the game, which I said on our 4th & 2 podcast this week, began with:

I think the Patriots’ defense will keep this one competitive, but Buffalo needs this one to keep pace with Kansas City for the #1 seed. I think Buffalo wins 27-13. But I’m hoping that the Patriots’ offense finally shows us something.

Matthew Slater: The 15-year veteran STs ace, who has been named to 10 Pro Bowls, could possibly be playing in his last game today against the Bills. But he received some lofty praise from Bill Belichick, who compared Slater to Lawrence Taylor, the Giants’ HOF linebacker.

“He’s the guy that everybody pays a lot of attention to. To the benefit of other players, they get less attention. But I think when you see players at that level, different, but literally, he gets it on every play, just like (Lawrence) Taylor got it on every play for the Giants. When you get that kind of attention, and you’re still able to be productive, that tends to put those players on a very elite level.”

Sean Payton: The Broncos were given permission by the Saints to enter into negotiations with the former Saints coach. Because Payton was still under contract with New Orleans, he signed an extension that ran through 2024, so any team that wants to hire Payton must first seek permission from New Orleans to negotiate with him. However, the NFL stated that any negotiations can’t begin until January 17.

Then there is the matter of compensation, which can be worked out later if the team, in this case, Denver, comes to an agreement with Payton. However, given the draft capital that the Broncos gave up to sign Russell Wilson, would Payton be interested?

Jake Bailey: The Patriots punter hasn’t played since Week 9, after being placed on IR. However, Bailey was expecting to be activated for the final two regular-season games, but the Patriots moved Bailey and Jack Jones from IR to the suspended list, reportedly for missing rehab assignments.

Bailey, however, didn’t take it lying down, and his agent released a statement that fired back on the Patriots. Mike Reiss of ESPN said that Doug Hendrickson, Bailey’s agent, posted, “While Jake Bailey was on IR, he never missed a single treatment, meeting or practice.”

“He was hoping to come off IR to play last weekend, but Jake was informed he was being suspended these last two games. This comes as a surprise, given his full participation during injury reserve. We have filed a grievance to fight this unknown suspension.”

Jones’ agent Jamal Tooson,  said in a statement, “Jack is focused on recovering and getting back to help the Patriots as soon as possible. Regarding the suspension, it appears to be based on miscommunication regarding Jack’s rehab process. I’m hopeful we’ll reach an amicable resolution for both Jack and the Patriots.”

Because they are suspended, Bailey and Jones will lose out on game-day checks. I’m sure we’ll hear more of this one in the future…stay tuned.

Matt Sokol/Calvin Munson: The Patriots activated both players off the practice squad in time for the Bills game. Sokol was the backup tight end last week against the Dolphins. Munson should see some action on STs, but has been activated for the first time this season.

Patriots 4th & 2 Podcast: If you haven’t checked out our PatsFans.com podcast, “Patriots 4th & 2”, in a bit, please check it out. Russ, Derek, and I looked at the Dolphins game and previewed the Bills game.

The slate of games for Week 18 and my predictions are straight up for this week. There are no more bye weeks in the season.

“Yeah, I think you captured it pretty well. That’s really what it is. Devin has done about everything a player could do for this program. Say the same thing about Matt Slater in the kicking game. I mean, I don’t know if there’s ever been or ever going to be a player than Matt Slater as an overall special teams player and the leadership he brought to the team, along with Devin.

“Devin came in as a corner, went to the Pro Bowl, moved to safety, led the defense from the safety position from his second year on. His off-the-the field leadership, on-the-field leadership is superior, as good as anybody I’ve ever coached at that position. He does everything right. He’s done everything right since he’s been here. He knows the line calls. He knows the defense inside and out, so he has total respect from everybody because of his preparation and his unselfish play.

“Same thing for Slater. I don’t know if he was here either, same question, but probably. What those two guys have done, what they mean to this organization, what they mean to me personally, what they’ve done here, it’s pretty impressive, pretty elite. So, you know, I’m sure Devin would have liked to have had one more interception on the ledger today but he gave us, again you just don’t see a lot of great plays that he makes, communication or adjustments he makes. When we have to change coverages, make coverage adjustments, it always runs through him.

“The front runs through a lot of times [Ja’Whaun] Bentley, down safeties. But all coverage adjustments run through him. It’s like truly having a coach on the field, having somebody that can see a problem, fix it, or at least take us out of a problem because of whatever, they sub late, the formation, whatever it happens to be. He’s got great judgment and great decision making.

“His decisions are quick, they’re decisive, and they’re almost always right. Any decision is a bad decision if you’re hesitant and everybody doesn’t get it. Making sure that we’re all on the same page, that’s always number one. Yeah, he’s a special one. He’s a special one..”

Patriots head coach Bill Belichick asked about the veteran leadership of S Devin McCourty, who commented that it may have been his last game in Gillette Stadium.