1 month ago at 10:32 am ET
Follow @MarkMorse5
Posted Under: Patriots News 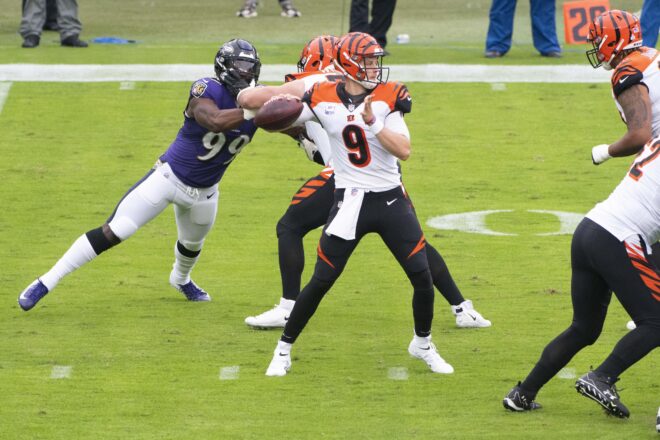 The Patriots are facing one of the better teams in the NFL this week the Cincinnati Bengals.  They are the defending AFC champions and narrowly lost the Super Bowl 23-20.  Their Offense is ranked #10 and is one of the better units in the league.  On Defense, they are ranked #16 giving up 226 passing yards a game while allowing the opposition to run for 100 yards a game.   They are well-balanced on offense between the run and pass.

Joe Burrow has started since he was drafted #1 in 2020.  He had a shaky rookie season with injuries.  However, in his second season, he led the Bengals to the Super Bowl.  This season he is having another fine season throwing for 3885 yards with a 61.1% completion percentage, 31 TDs to only 10 INTs.  The Bengals have amassed a very good group of wide receivers as well as two running backs that can catch the ball.  He was the comeback player of the year last season and was selected for his 1st Pro Bowl this season.  Brandon Duc Allen is the backup.  The 7-year veteran is a career backup with little playing experience.

The Bengals have two excellent running backs Joe Mixon and Samaje Perine.  Mixon was near the top of the league in rushing last season and is also considered to be an excellent receiver out of the backfield.  This season Mixon has 722 rushing yards on 183 attempts for a 3.94 average while scoring 6 TDs without a fumble.  He missed two games with an injury and they have been bringing him back slowly.   Samaje Perine has filled in very nicely for Mixon.  Perine is averaging 4.38 yards per rush for 373 yards and 2 TDs, with no fumbles.  He has also chipped in 34 receptions for another 264 yards (7.74 average) and 4 TDs, no fumbles.  The Bengals have a nice duo that can switch back and forth without any significant difference.  Both are excellent receivers and there is no drop-off.  Defenders can’t tell what the Bengals will do based on the running back in the game.

The Bengals have the best trio of starting Wideouts in the league.  Any one of them could be considered the #1 WR on the team.  Both Jamar Chase and Tyler Boyd were selected for the Pro Bowl.  #2 receiver Tee Higgins was a snub.

Jamarr Chase and Burrows were teammates at LSU.  Chase was the Bengals’ 2021 1st-round selection with the 5th pick in the draft.  That’s back-to-back dynamic players through the draft.  He was named Offensive Rookie of the Year in 2021, 2nd Team Al-Pro, and selected to back-to-back Pro Bowls.

Tyler Boyd would be the number one wide receiver on most teams in the NFL.   Boyd had a terrific college career at Pittsburgh where he caught 238 passes in just three seasons.  He declared early for the draft and was selected by Cincinnati in the 2nd round (#65) of the 2016 draft.  The 6’1, 197 lb. wideout has 425 catches for over 5,000 yards in his career with the Bengals.  The Bengals want Boyd to crack the 1000-yard receiving yards mark so they can brag they have three in the same season.

Hayden Hurst is listed as Questionable.  If he can’t go that will hurt their running game.  Hurst is an excellent blocker.  Devin Asiasi would be next in line.  The Patriots’ 2020 3rd-round pick (#91), couldn’t make it with the team but was claimed off waivers when he was waived at the final cuts this season.

It was the goal of the Bengals to rebuild their Offensive Line this year.  They started by adding former Patriot Ted Karras.  It was a huge mistake by the Patriots’ front office not to resign Karras over a measly 1 million.  They went out spent like drunken sailors to sign mediocre free agents from other teams but for 1 million they couldn’t sign a steady, reliable player they had developed from a late-round draft pick (6th Rd, pick 221) in 2016.  They should have paid him and let him start at LG while Cole Strange became acclimated to the NFL.  He would also serve as a backup to David Andrews at C.  When Andrews has been out, the Patriots are a different team.  Karras is the starting Center for the Bengals.   Jonah Williams is the 2019 1st-round pick (#11) out of Alabama and is set to be the anchor of the Oline at LT for years to come.  Cordell Volson is a 2022 4th-round pick out of North Dakota St.  At 6’6” and 315 lbs many had him projected for LT.  He has moved inside and played well.  They also signed Alex Cappa a former 3rd round pick in 2018 at RG away from the Tampa Bay Bucs.  In another shrewd move, they added La’el Collins from the Cowboys at RT.  Collins was a terrific college Tackle playing for LSU.  He was the top O-lineman from the SEC and was expected to be drafted in the top 10.  However, days before the draft it came to light that he was a suspect in the murder of an ex-girlfriend.  No team drafted him in the 2015 draft.  The Cowboys took a chance on him as an undrafted free agent and had him as a starter for 6 years.  They released him on March 17th, 2022 and he was signed 5 days later by the Bengals.  Just like that the Bengals had a completely new offensive line.

Starting LDE Sam Hubbard has been ruled Out for Saturday’s game.  Cam Sample will be taking his place.  RDE Trey Hendrickson will be playing with a broken wrist.  Sample only has 16 tackles on the season.  Hendrickson has 29 tackles but how effective will he be? DT BJ Hill is the leading tackler on the line with 60 tackles.  DJ Reader chips in with 22 and Zach Carter has 19.  Jay Tufele is Questionable and missed Thursday’s practice with an undisclosed illness.  Hubbard and Hendrickson are the sack leaders with 6.5 and 6 sacks respectively.  I can’t see how effective Hendrickson is going to be and Hubbard is out.

Logan Wilson leads the Defense in tackles with 106 so far this season.  Germaine Pratt is 2nd on the team with 92.  Gaither added 42 tackles making this trio a formidable match.  The Bengals don’t get much in the way of QB pressure from this group as they only have 2.5 sacks among the three LB.

Safety Vonn Bell is a player.  He has 67 tackles and is 3rd on the team.  He also leads the secondary with 4 INTs.  Jessie Bates the other safety has three INTs to go along with 59 tackles.  LCB Eli Apple has 43 tackles and 7 pass breakups but no INTs. Cam Taylor-Britt has 42 tackles in just 8 games.  We will probably see Trey Flowers as a slot corner.

The Bengals’ special teams can only be described as poor.  Kickoff Return man Chris Evans is ranked 37th in the league.  Punt Returner Trent Taylor is ranked 4th with a 10.46 return average. Punter Drue Chrisman has only kicked for the last 5 weeks and is unranked with a 47-yard average.  Evan McPherson has been inconsistent and ranked 19th in the league.  Good luck with the winds and cold in Gillette Stadium on Christmas Eve.

I don’t like the potential matchup of Boyd against Shaun Wade.  With Mills already ruled out, and Jonathan Jones and Jack Jones both listed as Questionable, the Wade vs Boyd matchup would be disastrous.  Look for the Patriots to play a tremendous amount of zone defense in the secondary with the minimal 4-man pass rush.

The Patriots have a big advantage in special teams.  Long Snapper Joe Cardona has been ruled out and I am hearing he will be put on IR and miss the remainder of the season with a tendon issue in his foot.  Tucker Addington was added to the Practice Squad and will likely be added to the roster.

High temp in the mid-’20s with high wind.

Matt Judon was selected to his fourth consecutive Pro Bowl as he leads the AFC in sacks.  Very disappointed the Patriots had no other representatives.  I thought Marcus Jones clearly was the best Return Specialist over Devin Duvernay.  Jones was 2nd in Punt Returns and 6th in Kickoff Returns.  Duvernay was 16th in Punt Returns and 20th in Kickoff Returns.  They both score a special team TD.   Brennen Schooler is tied with 5 other AFC players with 13 special teams tackles and they give the Pro Bowl nod to Justin Hardee.

Former Patriot Joe Thuney was selected to his 1st Pro Bowl.  Well deserved, after being selected 2nd team All-Pro last season.  We should never have let him go.  He is the type of player you build your offensive line around.

Have the Patriots players turned off Bill Belichick?  They are making uncharacteristic bad decisions and mistakes.  Do you think that Bill Belichick is not emphasizing the little things and not preparing them for every situation?   Do your job!  That’s all, it’s that simple.  Control what you can control and don’t try and do too much!  Don’t overthink it.  The team has good leaders on it like Devin McCourty and Matthew Slater.  Somehow the Belichick message has not gotten through to the players.

According to Matthew Slater, last week’s blocked punt was not the players’ fault but the officials.  Jabrill Peppers was engaged with the Referee to have the 25-second play clock re-set because players have been switched (the entire punt team came on).  Joe Cardona, seeing the play clock through his legs as he is set to long snap, snaps the ball because he sees the play clock coming down to 1.  The official told Peppers they were resetting the clock.  What the official should have done was blow the play dead and reset everything.

The number of pre-snap penalties, without the benefit of starting a play is unacceptable.  Brown and McDermott were guilty of this.  We had a TD called back because Jonnu Smith was not lined up on the line.  He was moving up when the ball was snapped.   That is a High School move.  Smith knows where he is supposed to line up.  That cost the team the game!  They kicked an FG rather than have the TD and those 4 points are the difference.