2 months ago at 11:37 am ET
Follow @IanLogue
Posted Under: Patriots Commentary 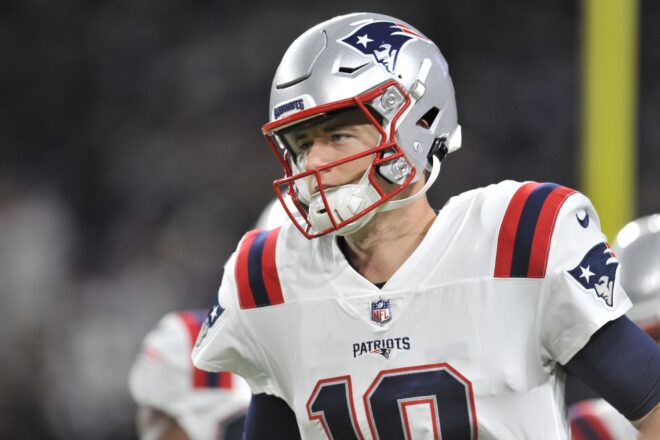 It’s been a long season for quarterback Mac Jones, who heads into Week 16 coming off the worst game of his NFL career.

To complicate matters further, he’s about to face three critical games that will make or break the season for the New England Patriots.

Obviously, the 2022 season hasn’t gone according to plan.  Bill Belichick’s decision to change the offense this offseason and put Matt Patricia and Joe Judge in charge of things clearly backfired in a major way, and as a result, Jones has regressed badly to seemingly the point of no return.

Anyone hoping for improvement each week has instead watched things keep sliding backward, with Belichick spending time at the podium visibly frustrated, while continually pointing to the fact they just need to keep working on their execution.

However, each outing instead appears to be an exercise where he and his quarterback are beating their heads against the wall hoping for different results.

Meanwhile, Jones continues to say the right things during his press conferences, but his actions on the field clearly reveal a disconnect between him and the coaching staff.  Obviously, anyone who has watched the last few weeks is aware that all is not well, and Tom Curran of NBC Sports Boston believes that given the way things have gone, there’s enough damage being done that it’s damaging the trust between Belichick and his quarterback.

“Bill Belichick’s going to get called in and he’s going to have preparations made by the end of the season as to, ‘How are we going to go forward with this?” Curran said on Tuesday during an appearance on WEEI with Andy Gresh and Andy Hart.  “What is our cure for the trust issues that have been fostered by the decisions made, for the dysfunctional offense, for the decisions made that landed Matt Patricia and Joe Judge in positions they weren’t ready for and spread too thin with other jobs, Patricia, in particular.  What’s the cure, Bill?”

“So, to me, he can either say – and I doubt this will be the case given the tenor of the way things are going – ‘Let’s run it back, because we’ve got some momentum going.’ That’s evaporated.”

“So the chance is very limited that they would be back that way.  But I do still think that Bill Belichick, because of what you mentioned, you can’t fire everybody.  Bill understands the logistics, the nutrition, the ways and means, the schedule-making, the training camp, the facilities, all of it.”

“Do you throw the baby out with the bathwater because of a monumental miscalculation on how good the coaching staff would be?  I think in some instances, you would.  If this was Matt Rhule, if this was Sean McVay you might say, ‘Yeah, he hasn’t earned this.’  But Bill, I think it’s too tough to throw the baby out with the bathwater until you hear his explanation and his plan.”

Curran was then asked about who would be here longer, Jones or Belichick?  While he believes that’s sort of a stretch, he still feels that there’s been some trust lost after what we’ve seen with Jones, which could definitely complicate things moving forward.

“What’s interesting about what’s gone on, and I just finished talking to Phil Perry about this on our Patriots Talk Podcast, what Mac is doing right now is really eroding Bill’s trust for him, I think,” said Curran.  “Bill lives on a chain of command, respect for authority, that’s a cardinal rule for him.  And what Mac is doing now is eroding the trust that Mac won’t go up the back stairs, even symbolically.  Because Robert Kraft can’t watch the gesticulations and histrionics on the field and see what happened on first-and-goal from the two the other day and not go to Mac at some point and say, ‘So, what’s going on here?’  And in that conversation, whether he says it or not, Bill Belichick will perceive that Mac is showing up either him, his decision, or everything Bill’s all about.”

“So that’s what Mac has set up here, with his histrionics and the notion that we have to take more control of the offense.  He’s making an enemy out of Bill Belichick.  Is that bad?  Does Bill deserve it, given the decisions that he made and the position he’s put Mac in this year?  You could make that case, but is that wise?  So I don’t know who lasts longer in that instance.”

Given those comments, it certainly adds some additional intrigue to the these last few weeks.  Obviously, they say winning cures everything, but if things end badly and Jones has one or more outings like he did Sunday, it’s also possible things could reach a breaking point where the two sides potentially part ways this offseason.

Jones likely wasn’t happy about not getting any support publicly by his coach when he was hurt, and Belichick likely isn’t happy about his recent antics toward the coaching staff on the field.

Needless to say, something has to give, and Curran believes some of that may start this week.

“There’s an erosion of the ‘Bill knows what’s best, I don’t want to piss Bill off’ that Mac has been kind of behind, and with good reason,” said Curran.  “They haven’t put him in the best positions to succeed.”

“They’ve put him in bad positions.  But I think that when you see players acting the way Mac did down on first-and-goal and Bill hasn’t checked it, I think this is the week in which he checks it.”

READ NEXT:
Patriots Fourth And Two Podcast: Can The Patriots Move On From The Vegas Trainwreck?
Posted Under: Patriots Commentary