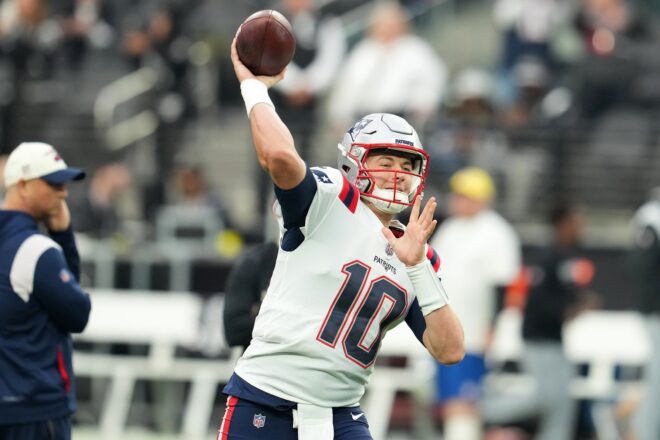 Sunday’s debacle in the desert obviously has everyone feeling pretty miserable on this Monday, with the New England Patriots taking one step closer to punching out for the offseason in a few weeks instead of gearing up for a playoff run.

To make matters worse, they’re about to play three teams in the Bengals, Dolphins, and Bills who are clicking on all cylinders while the Patriots continue grinding their gears and bucking the car.

It’s just bizarre.  In years past, this was the time of year when Bill Belichick teams would finally start to figure things out just in time to pull it all together for a postseason run.

This year?  Every week is just another one in futility.

On the surface, their loss on Sunday in Las Vegas feels like one of the most devastating, primarily because of how things finished.  However, looking back on it a day later, the end result was essentially just a fitting end to a game they truly didn’t deserve to win.

Granted, they overcame a big deficit and seemed poise to add to the Raiders’ long list of blown leads in 2022.  Instead, they made many of the same mistakes we’ve seen all season, and the outcome was essentially a reminder that eeking out a win would have just distracted them for one more week from all the problems they still need to deal with.

The defense was once again the lone bright spot.  They did a decent job against a pretty stacked Raiders offense, getting pressure on Derek Carr while also doing a relatively good job of keeping Devante Adams in check.  The interception returned for a touchdown by Kyle Dugger got them back into the game, and the anticipation he showed on that play was terrific.  The veteran obviously took advantage of something he saw on film, jumping right into the throwing lane to snatch the swing pass by Carr out of the air on his way to the end zone.

Meanwhile, quarterback Mac Jones finished with what was statistically the worst performance of his career.  Against the Raiders, Jones completed just 13 of his 31 throws Sunday, including a second half where he was just 5-of-16.

For a player who prides himself on his accuracy, Sunday’s result is definitely surprising.  His frustrating second season continues, and given all the work he put in this past offseason, this definitely wasn’t the result he was probably hoping for.

Some of what happened on Sunday was absolutely his fault.  Jones missed several throws that could have altered part of the outcome, with multiple passes thrown out of reach to players who were open.  Seeing that is definitely unusual for a player who displayed a lot better touch and accuracy in his rookie season. 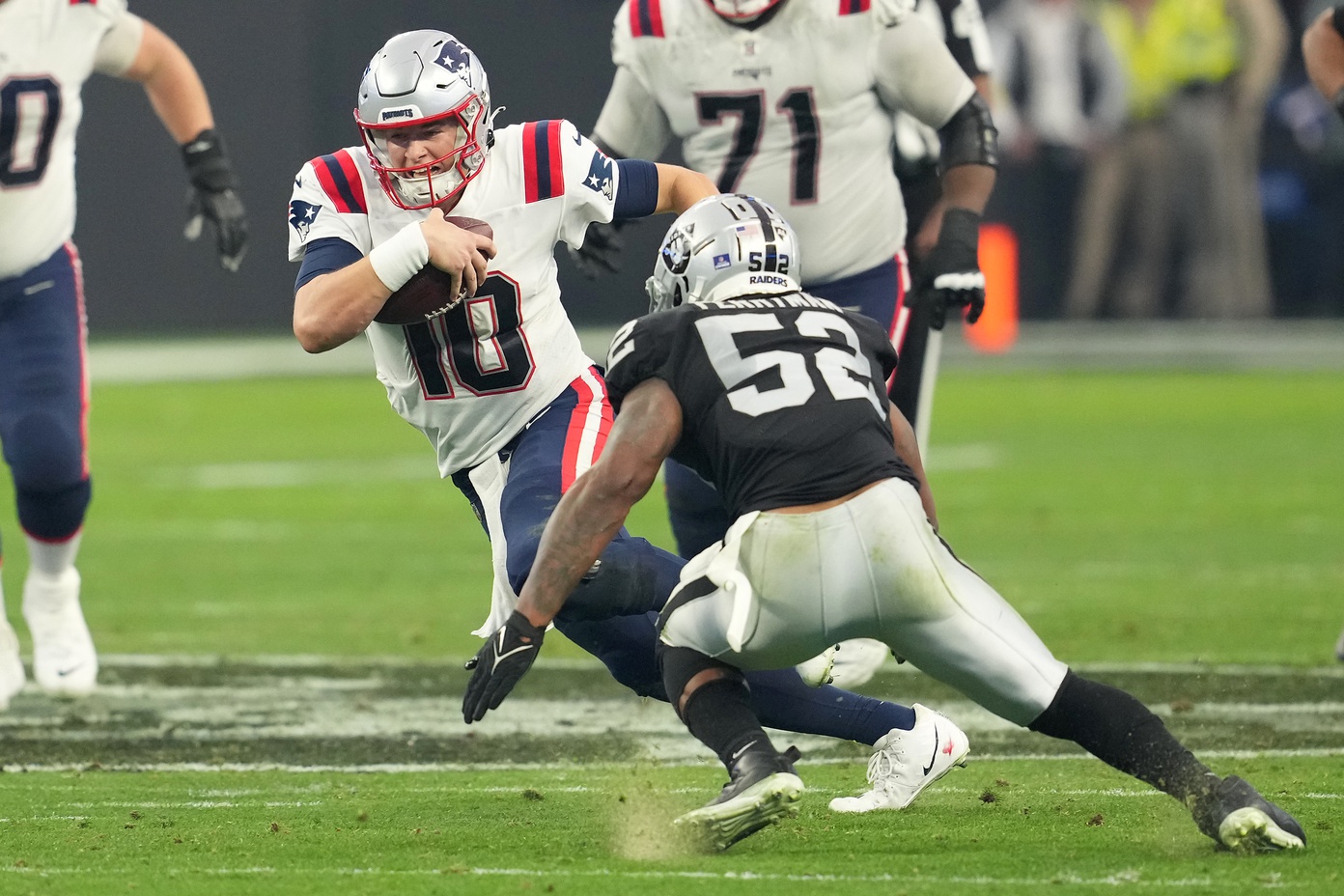 However, at this point in the year, Jones has already taken a much bigger beating than he did during his rookie campaign, both physically and mentally.  The first three weeks were frustrating, with Jones having a tough time adjusting to their new offensive system under new coordinator Matt Patricia.

Given how the preseason had gone, many people saw it coming but the hope was clearly that they’d work out the kinks and be ready for the regular season.

Yet, that didn’t happen.  The offense was completely uneven through those first few games, with not a whole lot of consistency.  Those problems were compounded by an offensive line that struggled badly while dealing with their own issues adjusting to this new scheme.

As a result, the protection was shaky, and it led to Jones’s ankle injury, which kept him out a month.  To make matters worse, as if the offensive transition wasn’t bad enough, it included an unbelievably poorly-handled situation set up by Bill Belichick leading up to Jones’s return.

With no endorsement as the team’s starter, Belichick threw Jones to the wolves against the Bears, which set up a night that he’ll probably never forget as all of the fans who cheered him the year before completely turned on him.

The more concerning part is after all of the frustration, it feels like Jones is starting to play with indifference.  Having played for Nick Saban in college and then with Belchick and Josh McDaniels last year, Jones was used to being coached at a high level.  It’s been clear in recent weeks he doesn’t feel that way this season.

After seeing some of the quotes in recent weeks coming out of the locker room, that sentiment seems to also be shared by others.  Belichick has tried to stop the bleeding, but things feel as though they’re reaching the point of no return, and his demeanor during his press conference was telling.  For a guy who is normally in control of everything, he showed a lot of fatigue and frustration after finishing yet another week where their issues again persisted.

Worse, for potentially the first time in his coaching career, his quarterback and players on that side of the football have seemingly lost faith, and what we saw on Sunday reflected that.

That’s a problem with no real solution, other than to just keep working on running the same plays in a system he just said a week ago that he believes in.  But at 7-7, the Patriots are now in a situation where every game is a must-win, and we’ve seen enough to know what they’re doing just isn’t enough.

Patriots Drop off From 2021 on Offense Is Staggering

Based on what we’ve seen, calling the offensive conservative feels like an understatement.

In fact, it feels as though there’s been little to no innovation offensively this season.  In the past we’ve seen flea-flickers, misdirection, and wide receiver passes.  To take it a step further, last season at this time, there had already been three receiver throws.

This year?  Nothing.  The contrast couldn’t be any more surprising.

Say what you want about Jones, but a lot of what’s transpired this season is textbook when it comes to ruining the development of a young player.  If you look at the promising passers who have come and gone over the years, many of them share a similar storyline.  Many take a beating and get put in bad offensive situations.  That usually ends to a constant churn of players and years of futility.

That’s sort of the direction this team feels like it’s heading in.  With McDaniels as New England’s offensive coordinator, the team scored 51 touchdowns in 2021, with Jones accounting for 22 touchdown passes.  Say what you want about Jones, but they’ve scored 23 as a team so far in 2022.

That’s a significant drop-off, which given how terrific Rhamondre Stevenson has been running the football should tell you that the problems go far beyond the quarterback.

In 2021, they also went over 40 points three times, hitting the 50 mark twice.  Each of those outings came with Jones at the helm under McDaniels.

That same offense saw both Jakobi Meyers and Kendrick Bourne finish with over 800 yards receiving as the offense put up over 4,000 yards passing collectively, with Jones accounting for 3,800 of them.  With three games left to play, they’re at 3,128, and Bourne, one of last season’s playmakers, has 273-yards for the year on 24 receptions.

Clearly, something is broken.  Fans can dump the blame on Jones and kick him to the curb, which could potentially see him thrive elsewhere behind a better offensive line with a coordinator who knows what they’re doing, as well as with a team that can surround him with the type of weapons Tua Tagovaiola or even Brock Purdy, who took over for Jimmy Garoppolo, has.

People can say if he needs that, he shouldn’t be here.  Fans in Miami said similar things about Tagovaiola, yet they’re still in playoff contention after taking Buffalo to the wire Saturday night and certainly appear to have a brighter future.

And based on the current trend, if the Patriots don’t surround whoever is under center with similar talent, it’s possible that looking up in the Division may be a frustrating reality we’re facing in the coming years.

So many people seem to forget Jones is just in his second year, yet he’s being judged as a multi-year veteran.  Plenty of guys in the NFL struggled in their second year and went on to good careers.  Discarding a player like Jones, especially given what he’s had to deal with this year, certainly feels premature.

Unfortunately, Sunday’s loss gaslit the fan base further, which is likely going to lead to plenty of ire should this week’s game against the Bengals go badly.  Anyone who remembers how ugly the Bears game was probably hasn’t seen anything should the Patriots find themselves down by multiple scores against a Cincinnati team that is absolutely surging.

Normally, this week’s game would have been one where the Patriots would be looking to make a statement and establish themselves as a threat in the Conference.  This season, this team isn’t seemingly any farther along heading into Week 16 than they were in Week 3, and that’s really the more distressing factor.

As we’ve seen, the definition of insanity is doing the same thing over and over, expecting a different outcome, and it definitely doesn’t feel likely that things will change much as we watch them limp through these final few weeks.

Needless to say, buckle up.  Because Sunday may have just been the start of what could potentially be an extremely frustrating finish.