1 month ago at 10:24 am ET
Follow @IanLogue
Posted Under: Patriots News 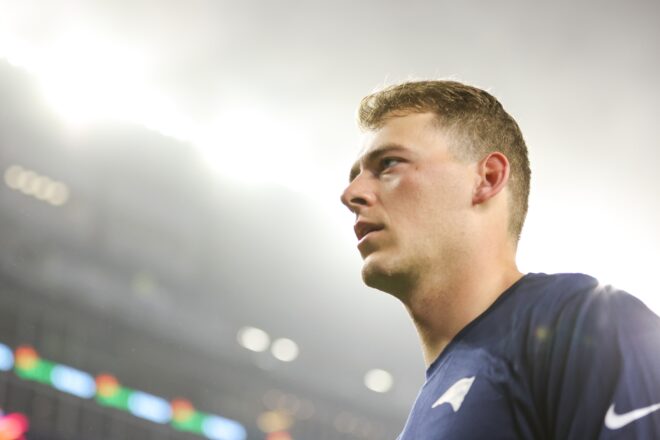 Any New England Patriots fan who watched Monday night’s game will likely have a tough time getting the scene that played out before them out of their memories.

If you’re Mac Jones, it’s probably going to be even harder.

The second-year quarterback took the field Monday night presumably hoping to shake off the rust and re-establish himself as a starter against a Chicago Bears team that on paper, didn’t appear to be a threat.

Instead, the Bears did what most teams tend to do, and they played against Bill Belichick’s team as if this was their Super Bowl, with Chicago looking like a completely different team than the one that couldn’t do much of anything against Washington two weeks ago.

This time around, they ended up spoiling the night of two quarterbacks in one fell swoop, beating both Jones and Bailey Zappe during a 33-14 loss at Gillette Stadium.

And the worst part of Monday night had nothing to do with what happened on the field.  What happened Monday night involved one of the most deplorable evenings ever to occur in Belichick’s 20 years as head coach.

On a night when fog hung over the stadium, and it was cold and wet, he put Jones out on the field with a bad ankle against a Bears team that was amped up and ready to go.  It was clear that with both Damien Harris and Rhamondre Stevenson both healthy for Monday night, the strategy of establishing the run and letting Jones get himself reacclimated seemed like a good scenario.

The only issue was, the Bears were ready for it.  In fact, not only were they ready for it, they overwhelmed New England’s offensive line and had Jones running for his life, as well as keeping his receivers well covered.

In the majority of Jones’ 18 snaps, no one was open.  The NFL Network’s Mike Giardi broke down his entire night on film and even went so far as to pull the data from NextGenStats where you could see the spacing on a couple of those plays, which confirmed what our eyes more or less saw.

Overall, Giardi found that Jones made the best decisions on each of those plays for what he had to work with, save for what turned out to be his final one of the night which was clearly a bad decision.  Although, that pass actually seemed to make contact with a camera cable, which was noticed by someone on Twitter well after the game.  Unfortunately, the officials didn’t catch it because if they had, the turnover would have been blown dead.

A little luck on an otherwise miserable night for Jones just wasn’t in the cards, and the look on his face as Bears defensive back Jaquan Brisker came down with the football essentially told the story for the entire evening.

It also led to sixty-thousand plus turning on the young signal-caller, which was about as ugly a scene as anyone has ever seen during Belichick’s entire tenure, with fans erupting chanting for Bailey Zappe to come into the game.

Belichick rewarded those chants on the next series by pulling Jones and sending Zappe out onto the field.  The rookie was energized and initially led one scoring drive and then followed it up with another off of a Bears’ turnover at midfield.

From there, the Bears adjusted and that was it.  They shut New England down the rest of the way, dominating the time of possession while also batting down Zappe’s passes and later picking him off twice.

The night was complete mayhem, and it was obvious that if Jones was looking for a little support from the same crowd that watched him lead them to the postseason just one season ago, he wasn’t going to get it.

Either way, it was a scene that Belichick created and it’s a night that we may look back on one day wondering if things could have – and should have – been handled differently.

NBC Sports Boston’s Tom Curran appeared on The Rich Eisen Show on Tuesday and talked about the scene at the stadium, which he said just became surreal.

“The Zappe chants began as murmurs,” said Curran, who was in studio during the game but Phil Perry was at the stadium and had painted a picture for him of what it was like.  “There was an incompletion to Damien Harris, it basically hit Harris in the facemask, and there was a little bit of ‘Zappe…Zappe’. Justin Fields gets them in the end zone before the Patriots had even had an opportunity to have a possession, and there were some ‘Zappe’ chants.  And then it got deafening.”

Curran took it a step further, saying that whatever strategy Belichick might have been thinking, it ended up having the opposite effect.  He added that what’s transpired overall since training camp has handicapped Jones’ development and has clearly worked against them.

“Bill Belichick stated a plan to Lisa Salters of ESPN that he would have brought Mac Jones back in in the second half, but the score got away from them,” said Curran.  “Imagine if he brought Jones back in with the Patriots leading 23-21 in the fourth quarter and it didn’t go good?”

“I mean, they’re actively kneecapping the kid – even if they’re not trying to – at every turn.  Whether it’s replacing the offensive coordinator, changing the offense, telling him to throw it downfield, and then getting pissed off because of the picks.  Or just promoting Bailey Zappe by not ‘not promoting’ him.”

“When we refer to the tradition of, you know, moving on when you have a force of nature at quarterback, who infuses the entire team, which does have some Hall of Fame level players like [Rob] Gronkowski and [Julian] Edelman, defensive players like Dont’a Hightower and Devin McCourty, it’s different.”

“I mean, his teammates – Jakobi Meyers said that he thought it was ugly, didn’t like the way it flushed out at all.  So yes, Bill can maintain that he is above it all, that he’ll ignore the noise and expects his team to do so as well, but I mean, to use a term that’s involved, I think he’d like to have this one back.”

Former Patriots linebacker Ted Johnson probably said it best.  “Mac Jones will never forget the fans turning on him last night,” Johnson Tweeted. “He strikes me as a guy who will always hold that against them.”

Some will laugh and say that if Jones doesn’t like it, he can move on.  Some may also say that if Zappe turns out to not be the guy, they’ll just go back to the well in April in the draft if they end up with a bad record and target someone else.

Unfortunately, it’s not that easy.  And the fact people are ready to part ways with a young player who was one of the best rookie quarterbacks in 2021, and also finished in the upper echelon of NFL passers last season, definitely seems pretty short-sighted.  Especially for those who have followed football long enough to realize how easy it is to see 5-10 years (or longer) go by while cycling through quarterbacks and still not finding the guy.

Many longer-time fans have already been through it.  Ask any long-time fan about what they endured during the late 80s and early 90s.  Most fans who grew up in the mid to late 90s at least had some stability and competitive football with Drew Bledsoe under center, with Brady eventually following him.

Say want you want about Bledsoe, but the Patriots went from a good quarterback to the best ever.  That’s a transition that few teams are lucky enough to go through.

The fact that they only endured one losing season under Cam Newton after Brady walked away before finding Jones was a miracle in and of itself.  As it is, Jones was the last man standing from last season’s rookie class and has been the best of the group so far, save for flashes from Jacksonville’s Trevor Lawrence, who went #1 overall last year.

Giving up on him after three games in a season with significant changes both in the offense and coaching staff just isn’t fair.  And then judging him in a loss where he was coming off barely four weeks from a fairly severe ankle sprain on a cold wet field in an environment that was worse than a road game (which, again, is still mind-blowing) is just a bad move.

To top it off, Zappe hadn’t faced a defense that challenged him as much as Chicago did, and unfortunately, save for the early test, reality finally set in and the final grade wasn’t great.

However, the one thing we know for sure is that what happened Monday night will stick in our memories for a long, long time.  It’s also a night that Jones probably won’t forget anytime soon either.  If ever.

Finding a good quarterback is difficult enough as it is in this league, and it shouldn’t be taken for granted, which fans appear to already be doing to Jones.  Should Zappe not pan out, we’ve been through the Jarrett Stidhams, the Kliff Kingsburys, and the Matt Cassels, the latter of which was a player who was the best of that group, and people actually pondered keeping him and potentially trading Brady after the quarterback went down with an injury back in 2008.

Think about that one for a second, because it’s absolutely true.  And that came barely one season removed from an undefeated regular season and one defensive play away from a 19-0 finish.

But, sadly, that’s how it is here in New England, and it shows you how scenes like Monday night are a bad reminder of the depths things can reach after having little to complain about over the last two decades.

Needless to say, people can boo all they want, but what happened Monday night may have been a setback that could have long-term repercussions.

It also may have widened the gap a little further between being relevant and being an afterthought in the NFL, which now has the outlook for the rest of the season – and possibly longer – suddenly a little less bright.