2 months ago at 7:33 am ET
Follow @SteveB7SFG
Posted Under: 2022 Patriots Regular Season 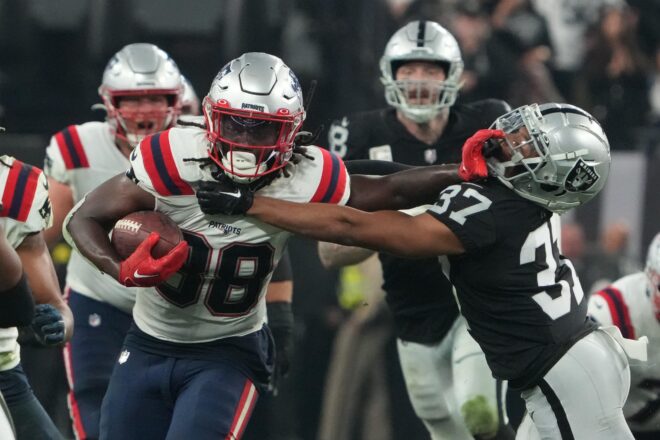 What Happens in Vegas…Should Stay There Forever

Situational football is something the Patriots traditionally have excelled at under Bill Belichick. Sunday in Las Vegas, the Patriots made so many dumb mistakes that it literally defies description.

Bill Belichick said after the game that the bone-headed play was a “mistake.” I’d say. Although characterizing that play as a mistake is akin to saying the Titanic had an “ice problem.” It was a colossal blunder that may be a knock-out blow for the season.

This was a collapse that was difficult of epic proportions. Mark Sanchez is off the hook. The “Butt Fumble” game in NY? Takes a seat far back in the van. The Colts’ ridiculous STs play with the fake punt with no blockers? Gone. How will this be characterized? Perhaps the Forrest Gump Play. “Stupid is as Stupid Does.”

So, here are other observations from the game.

No Justification In Any of This: Bad situational football abounded in this one. With Miami and the Jets both losing this week, the Patriots had a golden opportunity to cement their status in the playoff picture. Instead, they are back on the outside looking in. And this loss, in the way it unfolded, won’t go away with another “We’re on to Cincinnati” kind of moving on from this debacle.

This one will hurt, and with players already teeming with frustration, this loss may be the tuning-out beginning between the coaching staff and the players. Can they put this game behind them so quickly before the Bengals come to Foxboro on Christmas Eve? I’d tend to doubt that. But that is purely speculation on my part.

Awful Coaching Continues: Why were the Patriot players acting like they were behind in the game’s final few seconds? If the Raiders were ahead, then you have to do what you have to do, and the lateraling would have been understandable. Poorly executed but understandable.

Stevenson, Meyers, and Mac Jones all took the high road and blamed themselves for the play. But weren’t the coaches in their ears and telling them not to do anything stupid and if nothing was there to play for overtime?

Stevenson was beginning to chew up the Raiders’ defense, and in OT, I liked the Patriots’ chances of running behind Stevenson. But we were not to see it. Terrible situational football and coaching.

New York Tries To Explain TD That Wasn’t? Of course, we wouldn’t have gotten to this point if the dolts on Park Avenue had correctly called the TD pass to Keelan Cole the incomplete pass that it was.

With time running out, Derek Carr launched an excellent pass to the corner of the end zone, where Cole made a beautiful jumping grab, except that his second foot was clearly out of bounds. The official on the field ruled it a touchdown.

Several angles of the replay were inconclusive. But one replay was very clear. 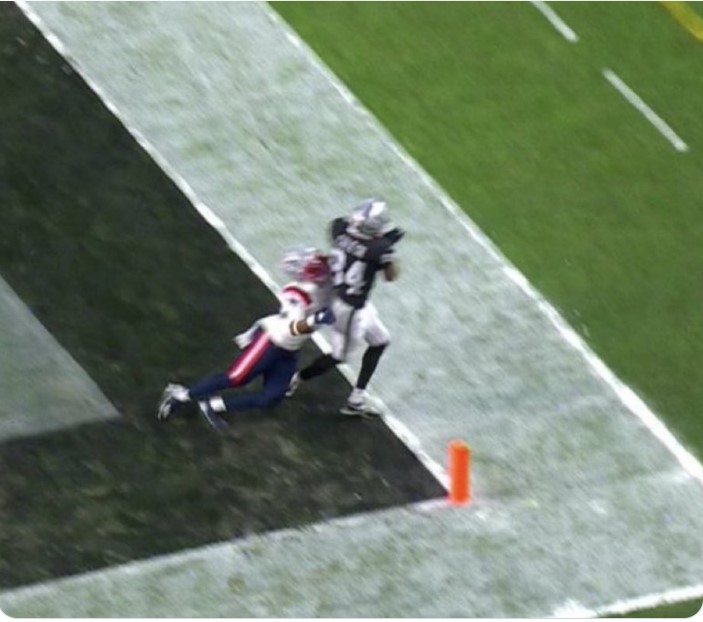 After a long delay, the officials ruled it a TD. Walt Anderson from the league office tried to say that there was no clear proof that Cole’s foot was out of bounds. Really?

Mayo And Belichick (Steve), Made It All Possible: The Raiders, and specifically Derek Carr, did nothing in the 2nd half. But after the two-minute warning, they practically invited the Raiders to easily pick their way down the field by playing well off the ball. Carr was happy to oblige, tossing easy passes to move the ball into scoring range.

How many times have we seen this scenario unfold? After the defense made great adjustments at halftime, they bottled up Josh Jacobs and were taking away Carr’s passing lanes. Even scoring a TD on a terrific play by Kyle Dugger, who saw Carr going to pass underneath, jumping the route, picking it off, and returning it to the house.

Of all times to lose faith in your defense, it was ill-advised at best. Bad situational football.

End of the 1st Half Coaching Blunders: STs coordinator Cam Achord has been under fire before. And he’ll (deservedly) get unwelcome attention this week after an ST debacle at the end of the half. This was the 4th blocked punt the Patriots have suffered in the past two years.

The players weren’t even set when Joe Cardona snapped the ball to Michael Palardy. The protectors are supposed to signal to Cardona to wait until the group is ready. They failed to do so, and the Raiders rushed in untouched and easily blocked the punt. This set them up at the Patriots’ 20-yard line and set up a touchdown to go into halftime up 17-3. Bad Situational Football.

1st and Goal Failure: On the Patriots’ second possession, they put together a nice drive that put them with a 1st and goal at the two-yard line after Meyers was interfered with in the end zone. On first down, Stevenson ran the ball to about the half-yard line.

Then things got putrid with the playcalling. Matt Patricia, who is ultra-conservative with his play calls and designs, decided at the absolutely worst time to try to get creative. And Patricia’s conservative play calls shouldn’t be a surprise. He was that way as the Patriots’ defensive coordinator.

Instead of pounding the ball with Stevenson or Kevin Harris, they tried a corner route to Jonnu Smith, where Mac Jones badly overthrew the ball. On third down, Jones threw a beautiful pass to Meyers for a TD. But a timeout was called…by New England.

On third down, Patricia put Marcus Jones in the backfield (?), then put him in motion where Jones threw a slant to Nelson Agholor that failed. Jones should have gone in motion to the left instead of to the right, drawing coverage with him.

On 4th down, Jones ran a QB sneak for a TD, right? Wrong. The Patriots were flagged with a false start. Another colossal situational football failure.

With the running game running for over 200 yards, why doesn’t Patricia put Jones under center and run play-action? Everyone on the field, in the stands, and watching TV can see this, yet the staff seemingly can’t.

Stevenson, Marcus Jones Have Big Games: Lost in the collapse of the final two minutes were the strong games by Stevenson and the rookie Jones that could have made them players of the game.

Stevenson rushed for 172 yards on 19 carries (9.1-yard avg.), including a highlight reel 34-yard TD that gave the Patriots the lead at 24-17. The fact that he was questionable with an injury spoke to his toughness and determination. All of this will be blotted out with his poor decision to lateral the ball to Meyers. But he had a great game.

Speaking of great games…Jones was terrific, drawing the task to cover Devante Adams and he did a great job. Adams was targeted 9 times and had just 4 catches for 28 yards. He is turning into a really valuable moveable chess piece.

Why The Constant Errors? This game was basically a horrible microcosm of what’s been happening all season long. After Josh McDaniels left, he poached a lot of talent to take with him to Vegas. The Patriots’ coaching staff has been short-staffed, and the results are clear to see.

This is why they continue to make the same mistakes constantly ad nauseam. These are mental mistakes that can be directly attributed to coaching. There needs to be massive change next season, both on the field and with the staff.

If I were the Krafts, I’d have had that conversation with Belichick on the plane ride home. He needs to hire a larger staff and bring in some people from outside the “Bill Circle of Trust.”

I would never think that a Belichick team would suffer from bad coaching, and yet, here we are.