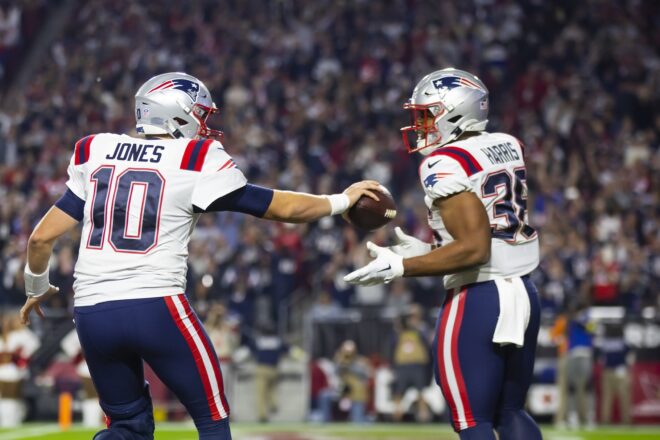 The New England Patriots snapped their two-game losing streak and kept their playoff hopes alive with a 27-13 win over the Arizona Cardinals on Monday Night Football.

Notable moments from the contest included surprise contributions on offense from two rookie running backs as Pierre Strong and Kevin Harris each recorded their first career touchdowns in the absence of Damien Harris and Rhamondre Stevenson.

A scoop and score-touchdown from Raekwon McMillan following a forced fumble by Kyle Dugger was the fourth defensive score this season. The 23-yard return was McMillan’s first career NFL touchdown.

Additionally, linebackers Matthew Judon and Josh Uche continued to be a force up from on defense. Judon increased his sack total to 14.5 on the season to get him back into a tie for first place in the NFL with Nick Bosa of the San Francisco 49ers. As for Uche, his second three-sack performance of the year earned him AFC Defensive Player of the Week honors and bumped his career high up to ten.

The combined double-digit sack totals between Judon and Uche mark the fourth time in Patriots franchise history two players have hit that mark in a single season. The last time such an instance occurred was in 2011 when Andre Carter and Mark Anderson each had ten.

Lastly, defensive back Marcus Jones recorded his first career interception making him the first player since Deion Sanders in 1992 to have a receiving touchdown, a punt or kick return touchdown, and an interception in the same season.

Relieve all these moments and more through watching the mic ‘d-up sideline sights and sounds and the victorious Patriots locker room.