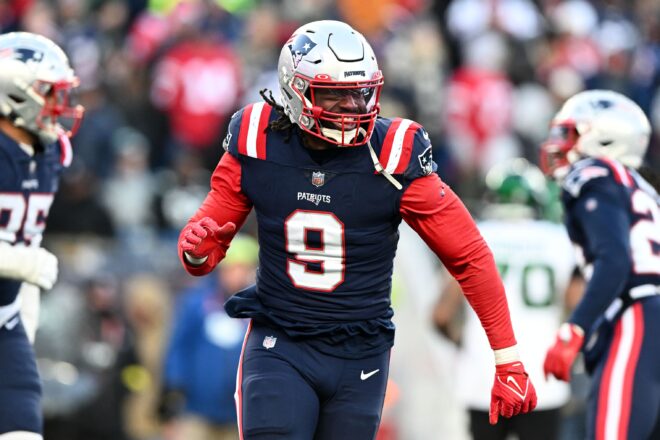 Matthew Judon is up to 14.5 sacks on the season, putting him in a tie for the league lead, and it appears the NFL is “rewarding” the All-Pro linebacker with yet another drug test.

Judon took to Twitter to voice his displeasure with the NFL and shared a screenshot of a text he received.

In the below tweet, Judon questions the “random” aspect of the process, declares all he uses is his melatonin to sleep, and “the rest is just vibes”.

Dear @NFLPA @NFL leave me the F alone please. It’s no way this is random. I take melatonin to sleep sometimes. The rest is just vibes pic.twitter.com/9bfYeoQH4O

Although it is unknown just how many times the NFL has randomly tested Judon this season, two previous tweets have indicated he is at minimum up to three.

According to CBS Sports, “the NFL’s official policy on performance-enhancing substances states that each week during the preseason and the regular season, ten players from each club will be selected to be tested at random by a computer program.”

Judon is not the only player to have raised suspicions this season. Philadelphia Eagles wide receiver AJ Brown shared similar sentiments back in October.

At the rate Judon’s career and season are going, perhaps more “random” tests will come.