2 months ago at 5:00 am ET
Follow @SteveB7SFG
Posted Under: Patriots Report Card 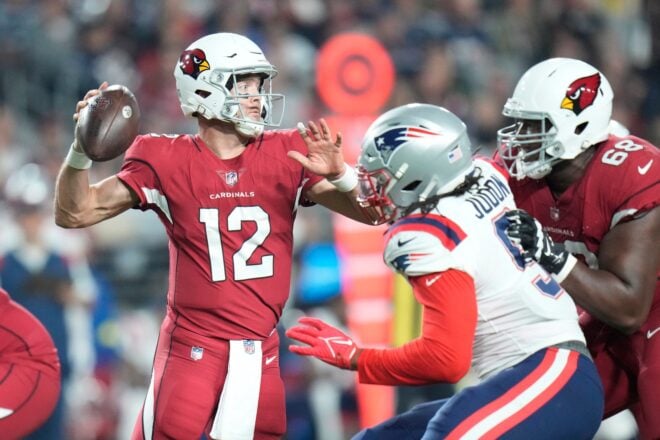 The Patriots snapped a two-game losing streak and beat the Cardinals 27-13 on Monday Night Football. The win leapfrogged the Patriots over the Jets and Chargers and put New England right back into the mix for the postseason as the seventh seed.

And while everyone is well aware of the last four games of the schedule, crazier things have happened, so the Patriots will have to take it one game at a time and see if they can finally get some stuff figured out with the offense.

It was a good night for some of the rookies and veterans alike.

So, here are our grades this week for the Patriots-Cardinals game.

Mac Jones had some good and not-so-good moments in this one, but the positives outweigh the negatives. He was doing a fast reading of the field and making quick decisions. Although his plays were coming slowly, which caused him to unleash some F-bombs again, he mostly threw with accuracy and good anticipation.

Jones’ numbers weren’t eye-popping, 24-35, for 235 yards with 0 TDs and 1 INT, but they don’t tell the whole story. The Cardinals like to bring pressure, and the OL struggles enough trying to block four.  So, the team went to the well early and often to the screen game. Jones threw the most screen passes of any game in his career on Monday night. We can rant on for hours about the lack of creativity and play design, but we’ll get to that later.

Jones made several excellent reads and throws during the game. I thought his best was was the pass to Kendrick Bourne after he was flushed out of the pocket and zipped the ball on the run down the right sideline for 15 yards. His pass to Nelson Agholor to the outside was a beauty of a throw. He hit Hunter Henry on a nice seam route when the team ran four verticals (say what?) for 39 yards. He also made a heads-up play recovering Kevin Harris’ fumble.

His one interception was the result of him being hit as he was releasing the ball.

Peyton Manning, on his ESPN show during the game, was impressed. “He’s made some big-time throws tonight,” Manning said. It’s been an impressive game by him,” he added.

Rhamondre Stevenson was hurt early in this one, and with Damien Harris inactive due to injury, the team had to turn to two rookie backs, Kevin Harris and Pierre Strong, to carry the load. Both played very well, and each scored their first NFL touchdowns.

They’re very different kinds of backs; Harris is a big bruiser with thighs like tree trunks. His 14-yard touchdown was a testament to his toughness and physicality, carrying defenders into the endzone.

Many of us were so high on drafting Strong this spring because of his speed, which is impressive to watch. He had a three-yard score and a 44-yard run, which was the wow factor. He added a 19-yard run and a 16-yard pass reception. He had five carries for 70 yards and added 2 catches for 20 more.  Harris rushed 8 times for 26 yards.

Jakobi Meyers was inactive with an injury, and then DeVante Parker went down with what looked like a concussion; he was staggering after going down hard after a catch. But the WR who was the best player on the field for New England was Kendrick Bourne. Yes, THAT Kendrick Bourne, who has been in the doghouse of Matt Patricia since training camp.

Bourne caught five passes for 47 yards, but he made two key blocks that were outstanding. One was on Harris’ 14-yard touchdown, where he sealed off S Bubba Baker, and the other was on Strong’s 44-yard run, where he also blocked Baker.

Marcus Jones played on offense, defense, and special teams. He had a nice swing pass reception for 12 yards.

Tyquan Thornton was more involved, but not nearly enough. He had four catches for 28 yards. Nelson Agholor had a rough night. Although he was targeted ten times, he only had five catches for 32 yards. He also had a couple of drops, one of which was dangerously close to being an interception returned for a touchdown.

Hunter Henry is alive and well, contrary to public opinion. The Patriots attacked the seams with Henry and produced. Henry had three catches for 70 yards, including a beauty, a 39-yard strike from Jones, who looked the safety off with his eyes before throwing down the right seam. Why don’t they do this more often? Good question.

Jonnu Smith, once again, was a non-factor.

The group only allowed 1 sack and 1 QB hit, but those endless quick screens that Jones was throwing were definitely a big part of that. Jones was getting rid of the ball in an average of 2.37 seconds, the quickest in the league this week.

The Patriots averaged 4.9 yards per rush, but 77 of those 102 yards came on just three plays. So, they weren’t bad or great (at all), but because of the play design, they were able to protect Jones.

The Patriots’ defensive line had an up-and-down game. On one hand, James Conner ran for 85 yards on 15 carries (5.7-yard avg) and a TD. But once the team went up 20-13 and beyond, the DL pushed the pocket and created pressure on Colt McCoy.

Daniel Ekuale, who tried to yank the ball out of Conner’s hands on his TD instead of tackling him, had a great sequence where he stuffed a run for a loss and, on the next snap, sacked McCoy. Lawrence Guy shared a sack with Judon, while Deatrich Wise got a big hit on McCoy.

Josh Uche keeps on grinding and is becoming a force opposite Judon, who is seeing more and more double teams. This gives Uche more room to rush the QB, and he’s taking advantage of it. Uche added three more sacks, bringing him to 10 on the season. All of them have come in the last seven weeks. Uche had five tackles, three tackles for loss, and 4 QB hits. He also hit McCoy hard and caused his pass to flutter, which was intercepted.

Jahlani Tavai made a really nice play, tipping a pass on 4th down that caused it to fall incomplete. And Raekwon McMillan scooped up a DeAndre Hopkins fumble and raced 23 yards for the game-winning TD. It was a huge swing in the game.

The Patriots’ secondary had some tackling issues early in the game. But with Jalen Mills still out, Jack Jones was playing a key role covering Hopkins, and he broke up a pass. But he suffered a knee injury and was replaced by fellow rookie Marcus Jones who saw increased playing time. Jones played well and was in the perfect position to intercept McCoy after Uche’s hit.

Jonathan Jones and Myles Bryant both were solid in this one and made some good tackles in the open field. There were some blown assignments, but overall, they held McCoy Kyler Murray to 255 yards (210 net), completing 28 of 41 passes with 0 TDs and 1 INT.

Nick Folk returned to his normal self, going 2-2 on FGs, including a 51-yarder at the end of the first half, and 3-3 on extra points. Michael Palardy started off awfully with two short punts, one of which traveled only 33 yards. But in the second half, he hit two perfect punts inside the 10-yard line, one of which was downed. The second would have downed on the 1-yard line but Matthew Slater’s heel touched the end line.

The defense gets high marks for holding Arizona to just 13 points and a single TD. Arizona was just 5-19 on 3rd/4th downs, including 1-5 on fourth downs, which is akin to turnovers. The pass rush had 6 sacks, 6 TFLs, 9 QB hits, and 4 passes defensed while scoring a defensive TD.

On the other hand, the offense continued its frustrating habit of being too predictable, with insufficient creativity. Some of the play calls, (a draw with 10 seconds left from …

We’re on to the Raiders.