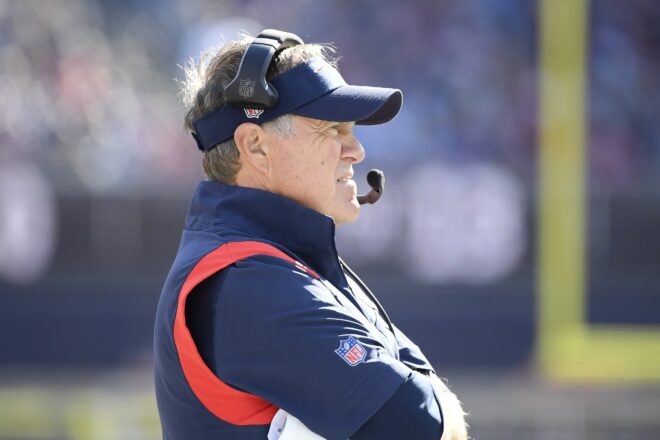 Some quick New England Patriots news and notes on this Wednesday:

1) It looks like this could be a difficult stretch again for the Patriots, with multiple reports on Tuesday pointing out that players were spotted in the locker room wearing masks ahead of Monday night’s game out in Arizona.  Jabril Peppers was the lone player given the “illness” designation last week, but it sounds like that number might be a little higher by the time this week’s practice report comes out.

Missing from practice on Tuesday were offensive linemen Isaiah Wynn, Michael Onwenu, and Trent Brown.  Wynn has been dealing with a foot injury, while Brown was reportedly dealing with an illness last Thursday night against Buffalo.  Having Onwenu miss time, or not be 100%, would be yet another blow to a group that is already pretty thin.  As it was, they signed Connor McDermott off the Jets’ practice squad just days before last week’s loss, with McDermott essentially coming in and playing 100% of the offensive snaps on short notice.

Anyone who cringed when they saw the inactive list last week may be even more nauseated if things don’t improve from that standpoint on Monday night.

2) Speaking of which, Jakobi Meyers was notably absent yesterday.  He was listed with a “head” injury and he remains another key name to keep an eye on.  He heads into this week with 50 catches on the season for 593-yards and 3 touchdowns.  He had a quiet night against Buffalo, with Meyers catching 3 passes for 22 yards, including 2 of those receptions coming on third down that were well short of the sticks.  Either way, he’s been a go-to guy for Mac Jones, and any potential absence on his part would be a tough one.

3) Also missing again yesterday was Jalen Mills, who missed Thursday night’s game with a groin injury.  His absence was notable because it left them one key player short in a secondary that had a tough time as it was dealing with Bills’ receiver Stephon Diggs, who went out and caught seven passes for 92 yards, along with a touchdown.

Mills’ absence left them weaker elsewhere as Jonathan Jones frequently got the call to stay with Diggs, which left other guys open as they tried to contain him and it made for a long night.  Allen finished Thursday night 9-of-11 on 3rd Down, completing three of them to Diggs as the Bills kept moving the chains and held the football for over 38 minutes.

Things don’t get any easier with Arizona’s DeAndre Hopkins up next, which means the Patriots have to hope that Mills’ health improves ahead of this one.

4) Bill Belichick had praise for Josh Uche on Wednesday, saying that Uche’s biggest asset has been his availability and his growth as a player.  “I think the biggest thing for Josh this year has just really been his availability,” said Belichick. “Josh is a good athlete. He has good speed off the edge and good pass-rush techniques. But you build that through timing, consistency and running games with your teammates and so forth.”

“He’s done that since he’s been here, but this year he’s been able to do it on a more consistent basis in practice, in training camp, and really build that continuity – as opposed to kind of being in and out of things.”

The former standout at Michigan was also the player who forced Josh Allen to lose the football near midfield late in the second quarter on a strip sack that Matthew Judon recovered, which helped set up the 48-yard field goal attempt at the end of the half where Nick Folk didn’t quite get enough on it and it hit the cross bar.

5) Belichick also talked about the progress of Christian Barmore, who has been sidelined as he continues working his way back from an apparent knee injury.  “Right well we won’t make any decision until it’s time to make that decision,” said Belichick. “But Christian’s making good progress. We’ll evaluate it. We see him daily. He’s working hard, making progress. But we’ll see exactly where he is, what he’ll be ready to do and when he’ll be ready to do it.”  Belichick also added that a determination on Barmore’s progress will be made at the end of the week.

6) He was also asked about the status of Marcus Cannon, who was placed on injured reserve at the start of November with a concussion.  He added that Cannon’s situation is different from Barmore’s, which obviously makes things a little more complicated.  “Well Marcus [Cannon], his situation, like everyone’s, every player who’s dealing with anything or is on injury reserve would be a case-by-case basis,” said Belichick. “Those injuries are a little bit different. The injuries are different. So they’ll be treated differently based on the different individuals.”

7) It sounds like it’s possible that we haven’t seen the last of the Marcus Jones experiment on offense.  Belichick was asked about him on Wednesday and based on his comments, it seems like we could potentially see him continue to get some snaps on that side of the ball.

“Well he only played a handful of plays here against Buffalo, but yeah, we’ll see what he has done, what we’d be able to get to,” said Belichick.  “Again, some of that’s a function of other factors outside of him. Not just what he can do, but where the other people would go and how things would develop. We’ll just have to wait and see. Certainly, he’s been explosive with the ball in his hands. We’ve all seen that.”

The players got a break today, but they’re expected to continue their preparation for the Cardinals on Thursday.

READ NEXT:
Thursday Patriots Thoughts 12/8: Some Interesting Storylines Ahead
Posted Under: 2022 Patriots Season