2 weeks ago at 6:39 am ET
Follow @bob_george
Posted Under: Patriots News 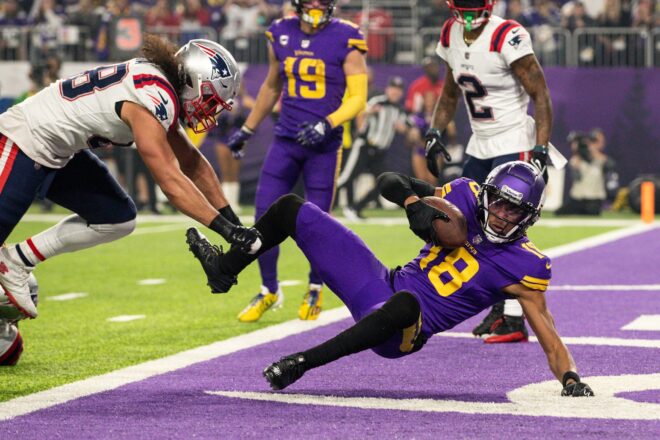 MINNEAPOLIS – It might be that the one thing you know about the 2022 Patriots is that you really don’t know.

Special teams carried the day on Sunday against the Jets. Whoops, mistakes galore doomed the Patriots.

The defense is elite. Nope, just pretty good. Kirk Cousins threw for nearly 300 yards and was sacked only once. Justin Jefferson had to be the main shutdown target, and he lit up the Patriots instead.

The offense is a major concern. Nope, Mac Jones threw for nearly 400 yards and the Patriot offense outgained the Minnesota Vikings’ offense by almost 50 yards.

The Patriots went into Bank One Stadium in Minneapolis and wound up on the short end of a 33-26 score on Thanksgiving night in a stadium they probably wish they could blow up (their only other game in this stadium was Super Bowl LII). On a night where Jones and the offense managed to move the ball quite nicely against Minnesota, penalties, bad situational football and bad special teams play tipped the game to Minnesota.

The Vikings improved to 9-2 and can clinch the NFC North next week. The Patriots fell to 6-5 and now get the Buffalo Bills at home next Thursday night, who walked off with a 28-25 win in Detroit to take a two-game lead over the Patriots in the AFC East.

The Patriots could have won this game easily if they had played a clean game. While they did not suffer any turnovers, there were critical junctures in the game which in the end proved fatal.

On the first drive of the game, a facemask call on Jonathan Jones (the first of two he suffered) propelled the Vikings to a touchdown as Cousins hit Jefferson from 7 yards out to give Minnesota an early 7-0 lead.

But Jones brought the Patriots right back, hitting Nelson Agholor from 34 yards out on a seam route to tie the game. Four plays later, Jonathan Jones picked off Cousins and returned it 55 yards to the Minnesota 17. But a botched reverse to Kendrick Bourne led to the Patriots going three and out and taking firm control of this game early. They settled for a Nick Folk field goal.

The Vikings came back with a 76-yard drive and tied the game on a Greg Joseph field goal. But Marcus Jones ran the ensuing kickoff back 46 yards to midfield. All the Patriots got was a four and out and another field goal by Folk. Rhamondre Stevenson continues to do well, but he has to know where the first down sticks are.

The Vikings came back to take a 16-13 lead thanks to a 37-yard pass to Jefferson in double coverage. Cousins hit T.J. Hockenson from one yard out for the touchdown as Kyle Dugger slipped and fell in coverage.

The Patriots got the ball back with 1:30 to go in the first half, and the first “fatal” play of the night happened. On second down and 5 at their own 30, Jones hit Hunter Henry in the right flat and had a lane down the right sideline. Henry badly needed to run out of bounds to stop the clock, but was tackled in bounds by Eric Kendricks on a perfect tackle. Henry not getting out of bounds cost the Patriots valuable seconds, and had to end the first half with another Folk field goal to tie the game at 16-16 at intermission.

Henry redeemed himself by catching a 37-yard pass for a touchdown as he made Camryn Bynum miss a tackle and gave the Patriots a 23-16 lead. But the most “fatal” play of the night happened on the ensuing kickoff.

Kene Nwangwu took the kickoff at the 3, ran up the left sideline, took advantage of a hold by C.J. Ham on Kyle Dugger that wasn’t called, ran through an attempted tackle by Brenden Schooler, and streaked down the left sideline for a 97-yard touchdown and tied the game at 23. Ham could have been called for holding, but overall it was lousy lane integrity for the Patriots at the worst possible time. Nwangwu is a top returner, but this simply can’t happen at this time in the game on the road.

The next “fatal” play came at the end of the ensuing drive for the Patriots. A 40-yard bomb from Jones to DeVante Parker put the Patriots at the Vikings’ 7. On third down, Jones found Henry at the goal line from the six and seemingly gave the Patriots the lead back. Henry caught the ball in midair with Chandon Sullivan draped all over him. Before he hit the ground, Henry had the ball across the plane of the goal line. Henry hit the ground with his hand under the ball, but as he rolled on his back, the ball was moving and thus the catch was not completed. It was originally ruled a touchdown but overturned on replay and once again Folk had to kick a field goal.

Minnesota then ran a 14-play, 65-yard drive which took a half a quarter to complete. A second facemask penalty on Jonathan Jones, a defensive break down on a 25-yard pass to Jalen Reagor on third and seven, and a foolish late hit on Adam Thielen by Myles Bryant led to a game-tying field goal by Joseph.

After a Patriot three and out, the last “fatal” play came on the ensuing Vikings’ drive. The Patriots had the Vikes stopped on fourth and three from their own 36. Ryan Wright came in to punt, but Pierre Strong ran into him and drew a five-yard penalty. The drive continued, and Cousins led the Purples down the field thanks largely to a 34-pass to Jefferson. Thielen and Jefferson ran a criss-cross pattern and Cousins hit Thielen in the left corner of the end zone with Jalen Mills in futile pursuit to complete the scoring.

The Patriots had two chances to tie the game, but both drives were killed by sacks of Mac Jones. The first of those drives was especially disappointing, as Stevenson managed to rip off a 40-yard catch on a screen pass. But the drive ended four plays later and the final drive was hampered by a sack and no timeouts left.

Cousins finished 30 of 37 passing for 299 yards, three touchdowns, one pick and a passer rating of 116.1. The Patriots shut down Dalvin Cook and the rushing attack, with Minnesota finishing with 57 total yards and a 2.1 per carry average. Jefferson and Thielen each had nine catches, with Jefferson getting 139 receiving yards.

Jones was 28 of 39 passing for 382 yards, two touchdowns, and a nice rating of 119.8. Stevenson led the Patriots with nine pass catches, while Parker led the team with 80 receiving yards. Stevenson wound up with 112 yards from scrimmage as he chipped in with 36 rushing yards and averaging over 5 yards per carry.

Buffalo comes to town a week from tonight. The Patriots will wear red jerseys for the second time this year. The Bills might leave their punter at home, as they did not need him in the second regular season game and the playoff game last year. A lot will have to break the Patriots’ way if they are to win, and they can’t depend upon another hellacious wind storm like last year in Buffalo.

In the end, not much to be thankful for if you are a Patriot fan. It was just too many mistakes to overcome against a very good Vikings team. This week will at least be normal, as the next game is next Thursday. The Patriots will need to eat turkey and not play like them.

By: Russ Goldman
In this episode, we look back at the Patriots loss to the Bills, Later on, we preview the upcoming game against the Cardinals.
4 hours ago

By: Ian Logue
Watching Sunday's group of NFL contests yesterday was a frustrating reminder of the contrast between the New England Patriots and the rest of the league…
1 day ago

By: Ian Logue
Here's what Bill Belichick had to say during his weekly appearance on WEEI's The Greg Hill Show on this Monday morning.
1 day ago