2 weeks ago at 9:02 am ET
Follow @MarkMorse5
Posted Under: Patriots News 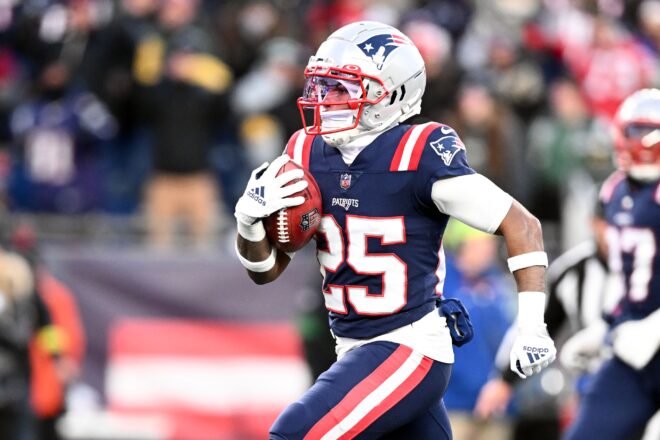 What a way to end a rather dull game with an 84-yard Punt return for a TD.  Marcus Jones was the only Draft Pick I got correct in my projection for the 2022 draft.  The reason I picked Jones was because of his speed and great return skills.  He fit a need for the Patriots and he came through on Sunday.  I still can’t believe the Jets actually kicked it to him with 26 seconds left in the game.  If they just kick it out of bounds, the Patriots probably would have kneeled down and gone on to Overtime.  Instead, Mann hit a line drive punt through the wind and outkicked his coverage.  Jones went untouched all the way.  I must admit I was screaming at the top of my lungs about the block in the back by Mack Wilson at the 5-yard line.  It was obvious, but just as bizarre as this game was, so was the non-call.  It actually wasn’t the only missed call on the play as another Patriot blocked a Jet in the back to help spring Jones at the beginning of the play.

I picked the Jets to win and they were in a position to do it except for a brain fart at the end of the game.  Onto Minnesota who should be smarting from the shellacking, they took at the hands of the Dallas Cowboys.

I will be off for a week and return in time for the Thursday Night game versus the Buffalo Bills.  Happy Thanksgiving to all the Patriots fans.

READ NEXT:
Monday Breakdown, Observations, Thoughts On Patriots 10-3 Win Over The Jets
Posted Under: Patriots News
Tags: Patriots vs Jets