18 mins ago at 11:09 am ET
Follow @IanLogue
Posted Under: Patriots News 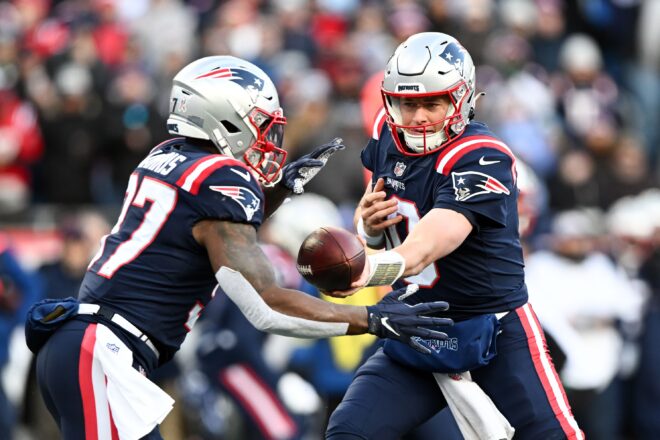 Some thoughts after a crazy finish on Sunday:

1) When the Patriots selected Marcus Jones back in April, the idea of New England adding a talented player to their secondary and an explosive returner in the kicking game seemed like a terrific find by Matt Groh and New England’s personnel department.

After Sunday’s game, it’s clear it was an absolutely brilliant move.

The Houston standout, who the Patriots selected in the third-round with the 85th overall pick, obviously made the play of the game during Sunday’s stunning 10-3 victory over the New York Jets.

Jones came up with a clutch 84-yard punt return for a touchdown in the closing seconds, sealing a win on an afternoon where points were hard to come by for both teams.  The play happened with just 0:26 remaining in regulation, with the score knotted 3-3 and the game seemingly headed for overtime.

Instead, Jones caught the football and burst up the right sideline past the first group of defenders and then alertly slipped back inside past the next several Jets’ players.  From there, he blew past the punter and all of a sudden, Gillette Stadium came to life as they saw Jones had open ground in front of him.  The rookie, who had earlier briefly left the game due to an ankle injury, took off and accelerated to the end zone, sending all 68,000 fans who were on hand into a frenzy while leaving coaches and players on the Jets’ sideline completely stunned.

It was an unbelievable scene, especially on a day where both defenses were the story all afternoon and Patriots kicker Nick Folk missed two field goals where wind played a big factor on both sides.

Jones said after the game his parents had made their first trip to the stadium for Sunday’s battle against the Jets, and they obviously picked the perfect time to be there.  He was all smiles after the win but went on to say he won’t spend too much time thinking about it with another one coming up just a few days away when New England heads to Minnesota on Thursday.

“I’m on to next week,” he told reporters following the contest.  “I’m one of those people.”

2) On the offensive side of the football, there was a step forward by Mac Jones and the offense, albeit the scoreboard certainly didn’t show it.

The time off also seems to have helped him get a little healthier. He had a lot more zip on several of his throws and showed fairly good accuracy on a day where the wind made it difficult on both quarterbacks.  However, the biggest issue on Sunday was the health of his offensive line, which saw David Andrews’ return end before it really got started.

The veteran center went down just minutes into the first quarter after he got tripped up while blocking on a 7-yard pass play to Rhamondre Stevenson, with someone stepping on his leg while he was on the ground.  He left the contest with a reported thigh injury, which seemed to mess things up on a drive where they had finally started moving the ball after two initial three-and-outs.

From there, a pretty tenacious Jets’ defense did a good job of making things tough on James Ferentz, who replaced Andrews at center.  They also had success against Trent Brown and Yodney Cadjuste, which overall saw Jones get sacked six times.  There were plays where the pocket broke down relatively quickly, and while it looked like Jones could have stepped up, the rear camera angle showed Ferentz had lost his block just as another defender was coming in.

Overall, they crossed midfield on five possessions and had two red zone opportunities, which obviously saw them come up empty.  Part of their other issues had to do with the fact that the Jets came after Jones a fair amount on early downs, with three of their six sacks coming on first down.   All three of those instances put them in a hole and ultimately killed the drive, including two in the second half.

The fact that Folk missed two field goals further complicated things and Bill Belichick said after the game that while it was good to see the offense move the football, the fact they couldn’t score was frustrating.

“We moved the ball. We had 300 yards of offense but only three points,” said Belichick.  “Did a poor job of finishing our drives, getting the ball in good field position into scoring range or getting the ball in the red area into the end zone. We’ve got to find a way to do that better.”

As for Jones, he was fairly upbeat following the win and looks like he might be getting some of his confidence back after an unven previous couple of weeks since coming back from his ankle injury.

“I think obviously we moved the ball pretty well today, so that’s a fact,” said Jones, who has clearly heard some of the criticism.  “We’ve got to be able to move it through that fringe area better, and we’ve got to watch the tape and see what we can do better, but I thought we stayed together as a unit, didn’t lose our cool, and worked together to try to win.”

3) On a day where wind was a factor, Damien Harris stepped up and played a key role in New England’s production on offense, with the veteran back breaking off two runs of over 20-yards, rushing for 65-yards on 8 carries, including two big gains of 22-yards and 30-yards on the afternoon.

However, the Jets’ defense really made things difficult as aside from those two gains, they held both Harris and Stevenson to two yards per carry, which again shows how big the loss of Andrews was considering how good things looked up front prior to him going down.  Stevenson rushed for 26-yards on 15 carries (1.7 avg), with his longest run of the day going for just 5 yards.

Most of his production came in the passing game after he caught 6 passes for 56-yards, including one third down conversion where the offense was facing 3rd-and-16 from the Jets’ 33yd line.  On the play, Stevenson absolutely willed his way to a first down, dragging defenders with him across the marker to move the chains.

But overall, the running game is likely going to be an issue moving forward.  It’s already suffered after the club had previously lost Andrews following the concussion he sustained against Chicago, which now may add some additional pressure to a passing game that made showed some improvement Sunday but is still a work in progress.

Jones said losing Andrews is obviously tough, but he’s pleased with the way they fought on Sunday.

“Those guys are fighting every play, so that’s all you can ask for is their attitude and their effort,” said Jones.  “And I’m pleased with that group, and we just want to score more points and get through that fringe area, and the story might be a little bit different.” 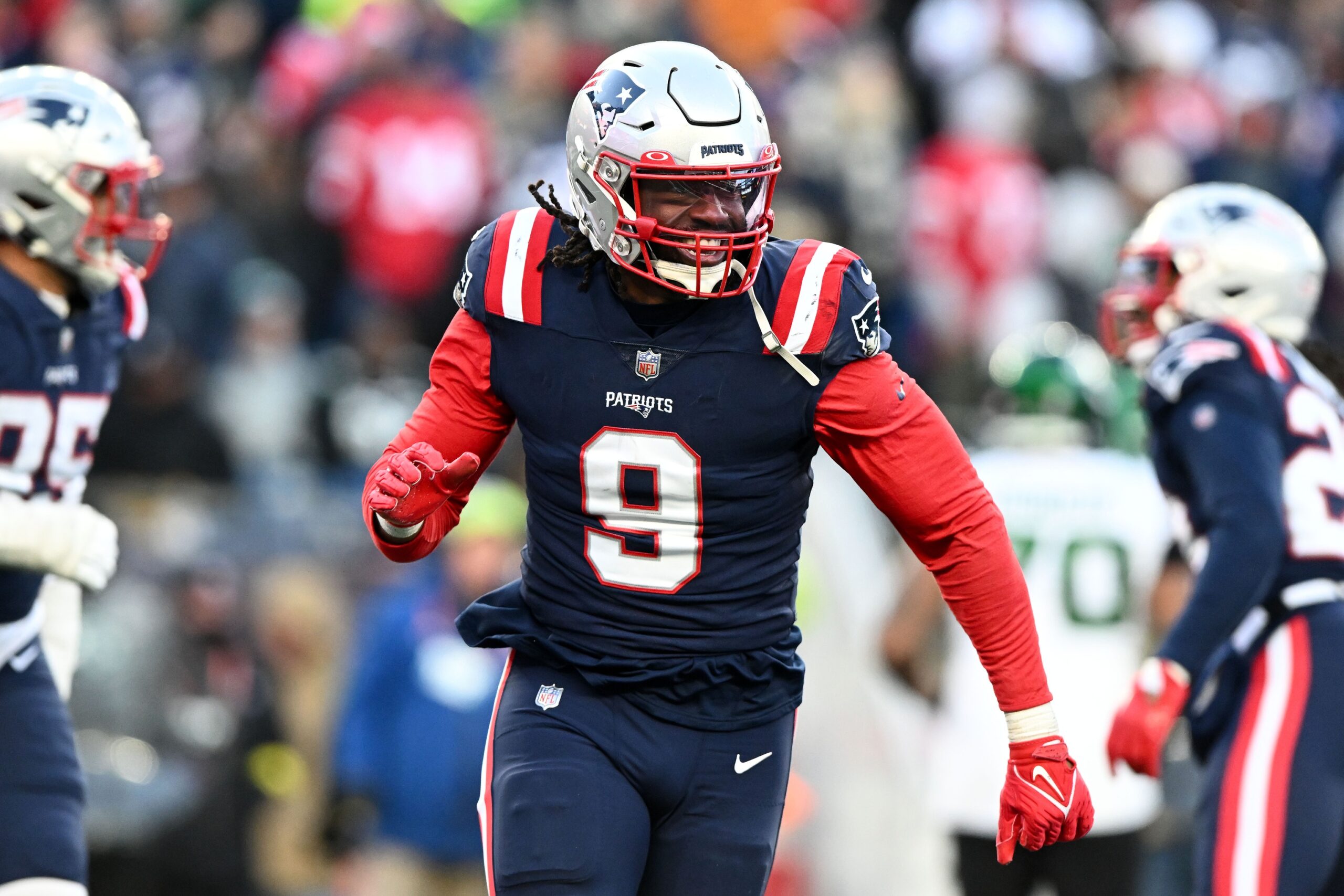 4) Matthew Judon continued to be outstanding and he was a force against a Jets’ offense that just couldn’t get anything going.  They kept Jets quarterback Zach Wilson under pressure all afternoon, sacking him four times and hitting him six times, with Judon finishing with 1.5 sacks and two quarterback hits.

Judon continues leading the NFL in sacks, with Sunday seeing him improve to 13 on the year, which is three ahead of Dallas’ Micah Parsons (10) and three and a half ahead of both Minnesota’s Za’Darius Smith (9.5) and San Francisco’s Nick Bosa (9.5).

Judon told reporters that part of their success on Sunday stemmed from the fact they did a good job of keeping Wilson from getting out of the pocket and being able to get upfield, which forced him repeatedly to also have to throw the football away.

“Disciplined rush from everybody, don’t get up the field behind the quarterback, just make him beat us from the pocket,” said Judon.  “Make him throw the ball instead of using his legs. He’s a very athletic guy, athletic quarterback, and like we’ve seen he can pick up twenty yards, get out of bounds, and not be hit, so let’s keep him in the pocket and make him throw.”

5) As for Zach Wilson, Sunday’s game left the majority in New York frustrated with the former first-round pick, and he’s not doing himself any favors.

Like the first match-up, Wilson showed no humility with reporters after the game, offering up a simple “No” when asked if he felt the offense let the defense down on Sunday.  The fact he said that is pretty astonishing, especially considering the Jets managed just two – yes, two – net offensive yards over the entire second half on Sunday.

Wilson finished Sunday’s contest completing 9-of-22 (41%) for 77yds, including just 1-of-5 for 7yds in the third quarter, along with 3-of-6 for 5yds in the fourth quarter. He was also sacked four times for 33yds in the second half.

Head coach Robert Saleh called the offensive effort “dog s–t” after the game, with wide receiver Garrett Wilson telling reporters, “this s–t is sorry,” and that that “we’re better than that.”

If people here think the whispers calling for Bailey Zappe are bad, down in New York, they’re screaming for a change.  In the post game show on SNY, the sentiment there is that back-up Mike White deserves an opportunity given how bad Wilson has been, noting that what the Jets did offensively overall on Sunday is simply unacceptable.

Wilson’s attitude after the game only made things worse.  ESPN’s Rich Cimini, who covers the team, reported on Monday that Wilson’s response after the game has “a lot of raw feelings” among Jets defensive players who are frustrated with his lack of accountability.

For a team that went from an opportunity to take the lead in the AFC East to now finding themselves in last place, it’s clear that things are on the verge of coming apart.  That should have every Patriots fan smiling a little more this morning and realizing as bad as it feels like things may be, clearly, it could always be worse.

New England now has a short turnaround, with a battle against the Vikings set for Thursday night in Minnesota at 8:20pm ET. 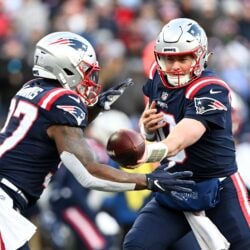 By: Ian Logue
Some thoughts after the Patriots beat the New York Jets on Sunday to improve to 6-4 on the season.
18 mins ago 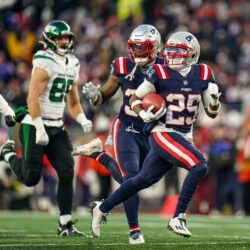 Monday Breakdown, Observations, Thoughts On Patriots 10-3 Win Over The Jets

By: Steve Balestrieri
Today, the Jets could only rush for 59 yards, 26 of them on scrambles from Wilson. They averaged just 2.6 yards per carry.
2 hours ago 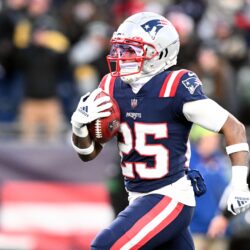 MORSE: 13 Observations from the Patriots’ Win over Jets

By: Mark Morse
I still can’t believe the Jets actually kicked it to Marcus Jones with 26 seconds left in the game.  If they just kick it out…
2 hours ago 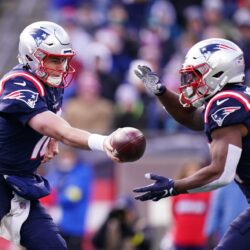 By: Bob George
The only way the Patriots were going to win on Sunday was going to be on a defensive touchdown or a special teams touchdown. Offense?…
17 hours ago 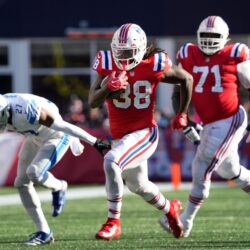 Patriots News 11-20, Players To Watch Against the Jets

By: Steve Balestrieri
"It's hard to play a team and remember all the things that you did a week or two weeks ago. There are some things that…
1 day ago
wpDiscuz