1 month ago at 10:43 am ET
Follow @IanLogue
Posted Under: Patriots News 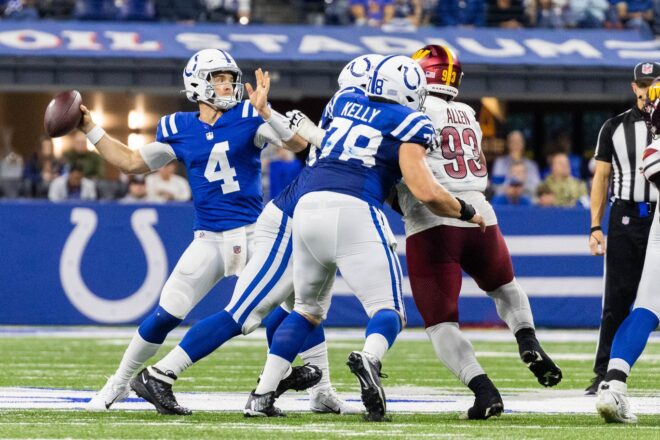 It’s a pretty big week for the New England Patriots, who have the chance to get above .500 on Sunday if they can come up with a win at home against the Indianapolis Colts.

Considering the injuries they’ve been dealing with over the last few weeks, there was one positive sign on Wednesday as Christian Barmore was back at practice for the first time in two weeks, having suffered a knee injury in the second quarter during New England’s win over Cleveland back on October 16th.

Barmore is one of New England’s best and most disruptive players and getting him back for Sunday’s game against the Colts would certainly give them a boost.  The Colts rushed for 135-yards against the Commanders, so Barmore’s presence up front would definitely be helpful.

Safeties Kyle Dugger and Adrian Phillips were each limited on Wednesday, which would definitely be tough on New England’s secondary.  They got good performances last weekend by Joshuah Bledsoe (17 snaps) and Jabril Peppers (40 snaps) after Dugger sat out Sunday’s game as he continues dealing with an ankle injury.

Phillips seemed to be in good spirits yesterday, joking on 98.5 The Sports Hub in an interview with Zolak and Bertrand where he said that if he won the Powerball, he’d probably just retire.

“If I won, I’d fall off the face of the earth,” laughed Phillips.  “I’d be surprised if a lot of people wouldn’t retire after that.  That would be crazy.”

Harris had missed a couple of games due to a hamstring injury but he played Sunday against the Jets and carried 11 times for 37-yards during the win.  With his designation being an illness, hopefully, he’ll be out there Sunday.  Reports on Andrew seem to point to him missing another week, which would seem to make sense with a bye coming up.  He suffered a concussion during the team’s loss to the Bears and wasn’t active against the Jets.

Ehlinger Shows Some Similarities to Zappe

This should be an interesting week for the Patriots’ defense.  Colts quarterback Sam Ehlinger missed just six passes after completing 17-of-23 for 201-yards against Washington in his first NFL start after replacing Matt Ryan.

Ryan has had a a tough run after having signed there this offseason.  While it seemed like a good place to get a new start, the former Falcons quarterback has instead turned out to be a disappointment, with the Colts benching him following their week seven loss to the Titans.

The veteran had thrown nine interceptions in nine starts, including two during Indianapolis’ loss to Tennessee two weeks ago.  So far, Ehlinger has at least alleviated that problem and didn’t turn the football over this past weekend despite their 17-16 loss to the Commanders.

Ehlinger, who wears #4, is a scrappy player and he’s very similar to Bailey Zappe in terms of his mannerisms and the way he throws the football.  Watching his performace from Sunday, he does a good job in staying calm under pressure while keeping his eyes downfield and climbing the pocket, and he made several nice throws when Washington forced him to move around.  It was almost a little uncanny watching him because of the similarities, but he’s definitely given Colts fans a reason to feel optimistic heading into this weekend.

Throwing coach Tom House reportedly worked with Ehlinger during the offseason and he looked good in his first career NFL start.  Like Zappe, the Colts kept most of the throws short and he didn’t push the ball downfield very often, but he did make a terrific throw late in the third quarter where he hit Alex Pierce on a 47-yard strike on a perfectly thrown ball in what was Indianapolis’ biggest past play of the season.  He also made another great throw to Nyheim Hines early in the fourth quarter on a 22-yard toss, so he’s definitely got that ability.

He’s also not afraid to take off and run with the football, running for a few good gains against Washington.  He rushed six times for 15-yards, but that doesn’t include a couple of nice runs that didn’t show up on the stat sheet after being called back due to penalties, including one that went for 21-yards.  Needless to say, that’s another element of his game the Patriots’ defense will need to be wary of.

Colts Should Be a  Tough Challenge

Indianapolis comes into this game 3-4-1 in a tough spot as head coach Frank Reich has taken some heat down there as of late.  The fact he’s shaken things up and made some difficult decisions seems to have helped his cause, but getting a win against Bill Belichick’s football team would definitely be a good place to start.

Reich’s club already beat them last year with Carson Wentz at quarterback, with the Patriots losing 27-17 back on December 18th.  This time, it’s a new QB in Ehlinger, who appears to have given the Colts a smart athletic player who they put in some designed runs for and he looked pretty fearless against Washington overall.

Those are the type of guys who often tend to give Belichick’s club problems and as a result, Belichick isn’t taking this one lightly.

“I think they’ve put together a solid roster that has good players in pretty much every position,” said Belichick on Wednesday. “Offensively, it obviously starts with [Jonathan] Taylor, [Michael] Pittman [Jr.], the offensive line and Coach [Frank] Reich. The play calling and scheme, they do a good job attacking. The quarterback, they’ve added some quarterback running type plays in there which obviously we haven’t been great against this year, so we’ll see how that goes.”

Looking at last week’s game against Washington, Colts receiver Paris Campbell’s speed definitely stood out and they used him on one play where he took the handoff on a sweep and accelerated through the defense before anyone had an opportunity to get a hand on him and picked up 28-yards.  He also caught two passes for 43-yards, including one that went for 38-yards … Linebacker
Ifeadi Odenigbo was also impressive and they used him to blitz the quarterback, including one play where he came away with a half-sack … Two other Colts players who stood out in Sunday’s game were Grover Stewart and DeForest Buckner, who are each tough up front.  While Buckner’s name is an obvious one, Stewart also made life difficult for Commanders QB Taylor Heineke and he’ll be another player that Mac Jones will definitely need to be wary of this weekend … Stephon Gilmore didn’t look quite as fast against the Colts and certainly appears to have lost a step.  However, he still finished Sunday’s game with five tackles, good for fourth on the team … Jones had praise for Gilmore on Wednesday as the two did spend some time together here before Gilmore was traded midway through Jones’ rookie season.  “He’s definitely still a premiere cornerback,” said Jones.  “I have all the respect in the world for him and how he treated me when I was here young. Just some of the information he gave me in the training room, just at his locker. He’s definitely an all-time dude. Excited to go against him again here.”