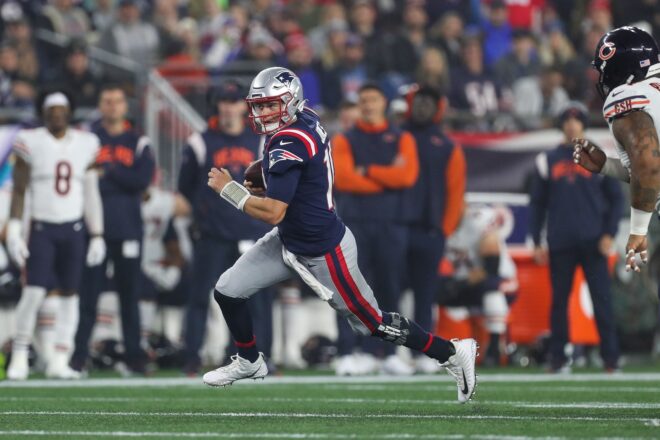 It appears New England Patriots quarterback Mac Jones has the ball back in his hands after a report on Wednesday revealed he took 90% of the snaps in practice ahead of Sunday’s AFC East showdown against the Jets.

Now he just needs to make sure it stays there.

Jones is coming off what was one of the ugliest outings in recent memory for a player after getting the starting nod Monday night.

To say it didn’t go well is an understatement.  Jones lasted just three series as the offense struggled to get going early on, with the second-year QB clearly overthinking every play and he appeared afraid to pull the trigger, likely in fear of turning it over.

Jones played in just 16 snaps which saw him hand off the football on seven of them as the Patriots tried to establish the run against a Bears team that allowed them to do have little success on the ground against them.

Chicago did a good job of bringing pressure, forcing Jones to move around and that saw him also take off and run three times, including one on a 3rd-and-5 on his final series where he picked up 10-yards to move the chains.

While moving up and down the field didn’t seem to bother him, on the one play he was forced to move to his left on his injured ankle, he immediately dropped to the ground and took a sack.

However, his night ultimately ended later in the drive after the quarterback faced pressure and threw up an ill-advised pass to Jonnu Smith, which Jaquan Brisker leaped up and snatched out of the air for the interception.

Anyone who has watched Jones play since he became the starter last season will likely agree that he’s never looked as tentative with the football as he was Monday night, and usually the more afraid you are of doing something wrong, the more likely you are to do it.

That’s essentially what happened.  And as Brisker celebrated the turnover, Jones was just left standing there forced to take in the gravity of what had just transpired, especially having already been met by frustration from head coach Bill Belichick coming off the field after the previous possession.

After hearing chants for Bailey Zappe after the two previous drives stalled, the scene became extremely ugly.  As Jones walked off the field, the boos were loud, to the point where you could hear it on the television broadcast.  That was followed by deafening chants for their backup QB which rained down from seemingly all 60,000+ fans who were clearly not happy being down 10-0 against a Bears team the Patriots had been expected to thrive against.

They got their wish, as Zappe took the field on the next offensive possession and engineered two straight scoring drives, which at the time saw New England retake the momentum.  It also looked like Zappe had potentially seized the opportunity to be the starting quarterback for the foreseeable future, especially given the darts he threw during each of those two possessions.

Instead, that didn’t happen as the Bears’ defense switched gears and shut him down as well.  Zappe and the Patriots’ offense got shut out from there, and the result was a frustrating 33-14 loss that dropped them back below .500 at 3-4.

That essentially put everything right back to square one, which now has Belichick quieting things down by seemingly slotting Jones back under center moving forward.  He finally put all the questions to bed on Thursday during his press conference, saying that Jones took a “full workload” during practice Wednesday while later confirming he’ll be starting on Sunday.

That should hopefully end the speculation.  At least for now, anyway.

Jones made it clear Monday night after the game that he’s a very routine-oriented person, which was a point of emphasis for him as he stood there and addressed the media after the game.

The second-year quarterback praised Belichick for his communication and said there were “no hard feelings,” but given that he’s a little quirky, he’s a guy who has a routine and it sounds like all the uncertainty likely took its toll.

That seemed to be the case with several players, who said after the game they were unaware of any type of quarterback rotation or any potential changes at the position.

Belichick seemed to address some of that Thursday, emphasizing the importance of Jones getting more of the workload in practice, saying it’s an important part of the preparation in terms of getting their timing down given the time Jones has been out. 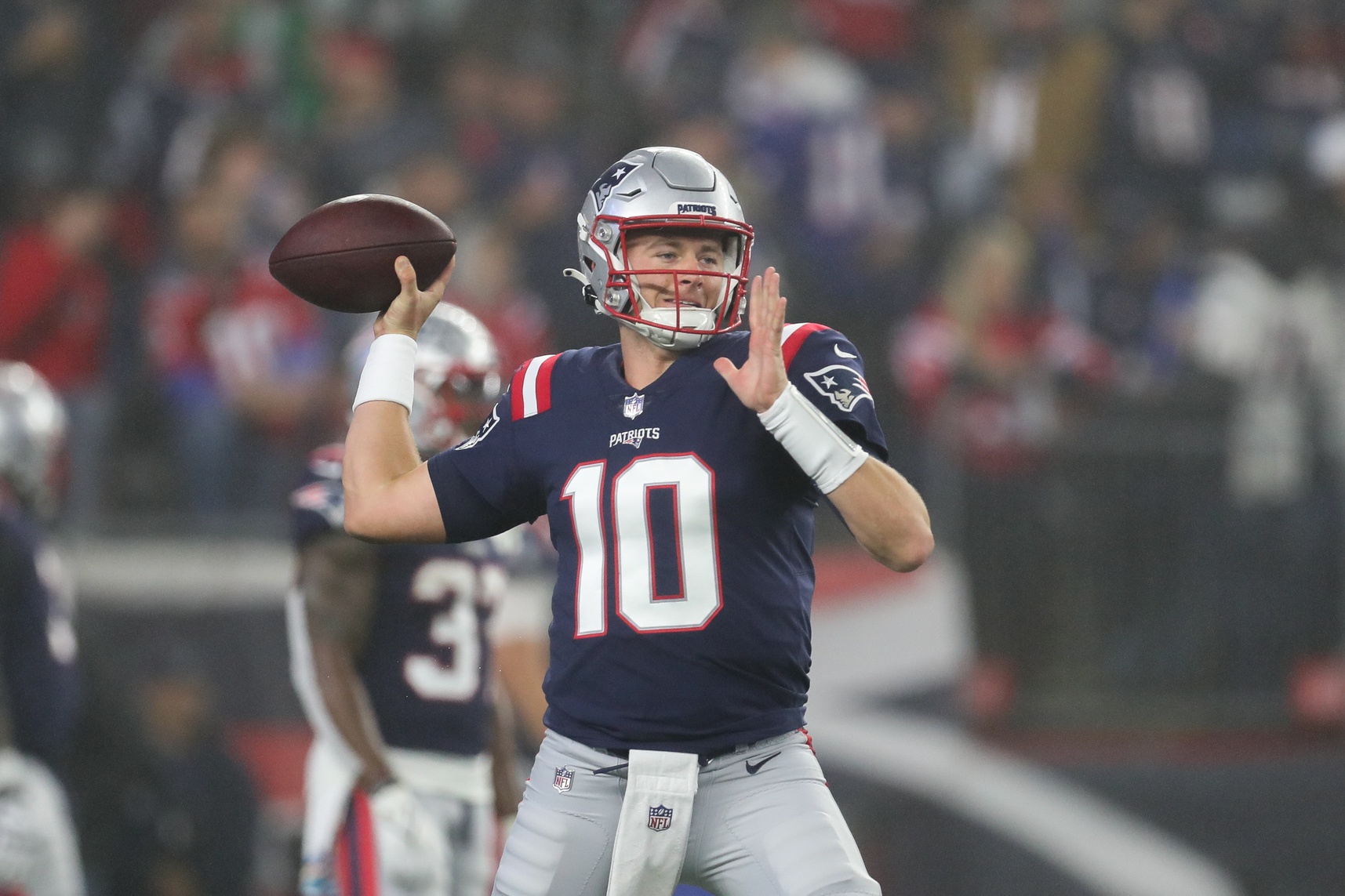 As a result, after a crazy couple of weeks, it appeared to be business as usual.  Belichick now seems to finally be doubling down on the guy who he spent the entire offseason praising for his hard work and dedication, leadership, and his progress.

Obviously, while it hasn’t quite translated into the success they might have hoped for, no one knows the context behind the situation better than Belichick.  He’s fully aware of what Jones has had to deal with as the offense and coaching changes have made this transition a little more trying than it probably needed to be.

At the same time, while Jones will get some slack, it’s up to him to deal with this adversity and put all that behind him.  There’s no question that what happened to him Monday night was completely unfair, with players in the locker room obviously agreeing with that sentiment. But that page is now turned and keeping his job will depend on how things go from here.

It’s clear by putting him back as the starter and burying the speculation – at least internally – that Belichick understands the importance of re-establishing some stability while giving Jones some benefit of the doubt.

For Jones, that’s a massive step for a head coach who is quietly facing the same pressure he is in terms of going out and winning football games.  Now it’s up to the second-year QB to prove it’s the right decision.

It’s been a long time since Jones played a perfect game, which would require you to go all the way back to their Week 17 game against the Jaguars last year where he completed 22-of-30 (73.3%) for 227-yards and three touchdowns in a 50-10 blowout win over the Jaguars at Gillette Stadium.  That was a game where Jones completed 12-of-14 (85.7%) of his throws in the first half, along with two of those touchdowns.

With Belichick seemingly giving him a vote of confidence, it’s time for Jones to hopefully reward that by stringing some good performances together, which starts on Sunday down at MetLife Stadium against the Jets.  Because, unfortunately, his absence ultimately allowed Belichick to get a sense of what they have in their fourth-round rookie QB, which definitely changed the landscape a bit.  Especially since the optimism he may have for Bailey is probably a little higher than it may be with Jones at the moment.

Jones did seem confident as he spoke to reporters on Wednesday, which was a positive sign heading into the weekend.

“I plan to start every game that I’ve ever played in,” said Jones Wednesday when asked if he planned to start Sunday against the Jets.  “So whether that was in peewee football or third string at Alabama, I always try to prepare as a starter. Like I always say, if it’s one snap or 70, I’ll be ready to go.”

“That’s all you can do, right? You can’t really control anything else. I work really hard and put myself in position to do that. Yes, I think I deserve that.”

In a league where players typically don’t get extended second chances, as Jones alluded to, he’s certainly earned his.  But what happens from here is now up to him, and he’ll need to look more like the guy who won 10 games just a season ago than who we’ve seen so far.

Jones has said he’s been in this position before, so he understands that this is definitely his chance to prove the doubters wrong.

Still, if he doesn’t rise to this final challenge and play the way he’s shown he’s capable of, he may not get another one.

Time to stop all this nonsense talk about qb controversy. The o-line stunk and the defense stunk. That was the problem on Monday. The D has been good but the On-line has had no consistency all year and until that gets fixed and there isn’t an offensive penalty every other set of downs it won’t matter if Mac starts or Zappy starts or Tom Brady comes back and starts.