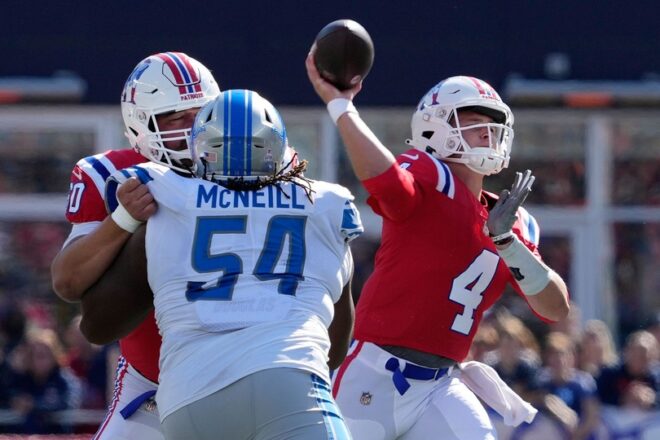 With Mac Jones still sidelined with his ankle injury, New England Patriots fans have been debating various stats, including little nuances within the offense where they believe one may excel over another.

One topic of discussion that’s come up in recent days has been who does a better job in terms of targeting a larger number of receivers, with some believing that rookie Bailey Zappe has been better about spreading the ball around compared to Jones.

Well, the results more or less show that’s not the case, but both players overall ended up being exactly the same when you look at their entire bodies of work.

Here’s a look at how it broke down:

Week 6 at Cleveland: 7 Receivers Targeted*
*Bailey caught a pass for -6yds on a deflection (not included)

So as you can see above, Jones targeted more players per game than Zappe, but the two players ultimately connected with the same number of receivers over their 3 game spans.

However, if you want to give the rookie an edge, you can because Zappe did something a little unusual. He actually hauled in a deflection that bounced back to him during Sunday’s game in Cleveland, which on the stat sheet went down as a target and reception to himself for a loss of 6-yards, which would technically give him 11.

Either way, Jones had been the QB targeting more players each game than the rookie, but again, a lot of that could certainly be attributed to the difference in the way they’re doing things offensively with Jones out of action. Zappe also didn’t come into the line-up in Green Bay until they were 10+ minutes into the game after Brian Hoyer was forced to leave after suffering a concussion.

After making the trip to Cleveland, it’s tough to say if Jones will be ready to go this week and if he’s not, New England has an unusual luxury in having a capable player in Zappe who could potentially be on his way to making his third-straight NFL start on national television next Monday night against Chicago.