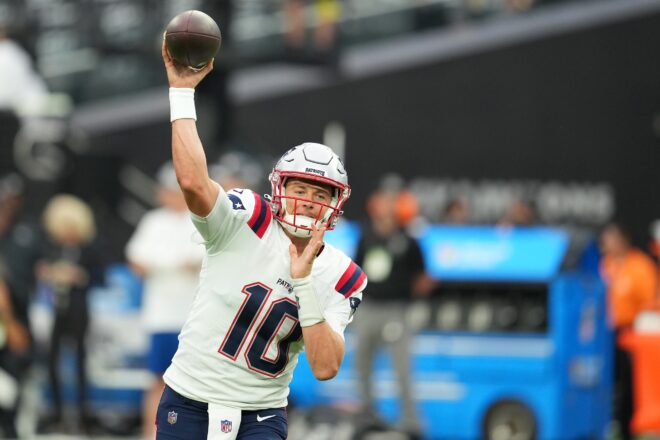 While the folks at WEEI and the Greg Hill Show may have a good relationship with Boston Globe reporter Ben Volin, it’s hard to imagine he’ll be up for future appearances anytime soon following the news that has come out since his appearance this morning.

Volin, who was in New York covering the NFL owners’ meetings for the Boston Globe, called into the station and was asked about an assortment of topics, which obviously included questions about his recent assertions on Mac Jones needing to be humbled after he experienced some success in his first season as a rookie.

But when challenged a bit on it by host, Greg Hill, Volin doubled down on his assertion, and then even took it a step further, adding on Jones, “his attitude problem is obvious in the building and everyone knows it,” referring to a DM he received where he wouldn’t reveal who the source was.

Well, it appears it didn’t come from anyone within the walls of Gillette Stadium.  According to Barstool Sports, it apparently came from a fan named Nolan C, who runs a podcast and blog called “Mailing it in” and apparently was the one who reached out to Volin with the information, which Volin repeated almost verbatim on the show.

Here’s the screenshot of the reported exchange below:

If this is indeed true, it’s certainly disappointing.  In what’s becoming a much more difficult internet and broadcast landscape, many writers have started putting out more outlandish takes for obvious reasons.  In a day and age where that’s, unfortunately, what drives the most views, ratings, etc., the reasoning behind it makes sense.  But there’s obviously a fine line between opinion and fact and that clearly got blurred to the point where even Volin appeared hesitant before eventually rubber-stamping what he said.

“Well, do with it what you want,” he said.  “Call it a report, do what you want.  I’m just telling you it’s not like anything I’m going to go, like, splashing all over the pages of the Boston Globe.  I’m just further illuminating stuff that I’ve heard.”

But if Volin made the comments this morning with this as his only source, that decision may come back to bite him.

It’s unfortunate because despite his contrarian takes and some of the things he’s said, his football notes and some of his analysis does tend to contain some interesting pieces of information.

However, this latest revelation by Barstool, again, if true, would definitely be a black mark against him that might potentially hang around on him a little longer than he hoped.

Given that Hill also conducts the weekly interview with Bill Belichick on Monday mornings, it will be interesting to see if this has any effect on his relationship on-air with Volin for the foreseeable future after this.  Although that may be a moot point depending on whatever fallout may be coming for Volin at the Globe.

Considering their history when things like this have happened, he’s likely facing something.  It’s probably just a matter of what the severity might be.

Needless to say, he may now be wishing he had listened to whatever feeling he had that had him hesitant to sign off on it in the first place.  Because it definitely feels like he may be about to pay for it.

READ NEXT:
Patriots Fourth And Two Podcast: Do We Have A Quarterback Controversy
Posted Under: Patriots News