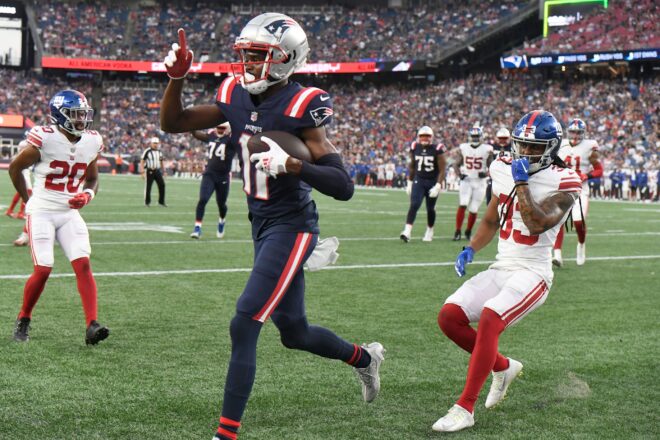 Some good news on Wednesday as rookie wide receiver Tyquan Thornton was out at practice, which hopefully marks the start of his return toward getting back on the field.

The rookie suffered a broken collarbone during the preseason and ended up on injured reserve to start the 2022 campaign, but it appears like he could be getting closer to finally seeing his first NFL regular season action.

The rookie was spotted Wednesday wearing a sweatshirt while running routes during the practice session, with video posted by various reporters reminding everyone of the potential weapon he could provide once he’s finally healthy enough to play.  Thornton was one of the bright spots of the preseason and looked impressive in what little we saw from him, with the rookie hauling in three passes including a touchdown.

Having the speedy wideout back in the offense would certainly give them a lift, albeit, it would obviously come at the expense of another player.  Kendrick Bourne has been the odd man out behind DeVante Parker, which has certainly had mixed results.  Mac Jones has struggled to get in sync with Parker, having been picked off on four of his attempts to the veteran receiver.  Most of those plays have come 50/50 balls from Jones where Parker has simply been on the wrong end of the exchange with the defender.

As for Bourne, reports during the beginning of the season indicated that he was in Matt Patricia’s doghouse, which saw him play just two snaps in the opener in Miami.  However, one of those plays included a 41-yard reception, which was a reminder of how explosive of a player he can be.

He’s seen more time the last few games but still appears off from where he was last year with Parker in the mix.  However, even with the reduced playing time, Bourne has had good production.  He’s in the mix numbers-wise with 9 catches for 138-yards while averaging 15.3 yards per reception, with 8 of those receptions moving the chains.

The team has already been without Jakobi Meyers for the last two games while he deals with a knee injury, so it’s definitely going to be interesting to see how they handle the receiver rotation once Thornton’s ready to go and Meyers is back on the field.

The former Baylor standout is eligible to come off IR this week, with the Patriots then having 21 days to activate him to the 53-man roster.