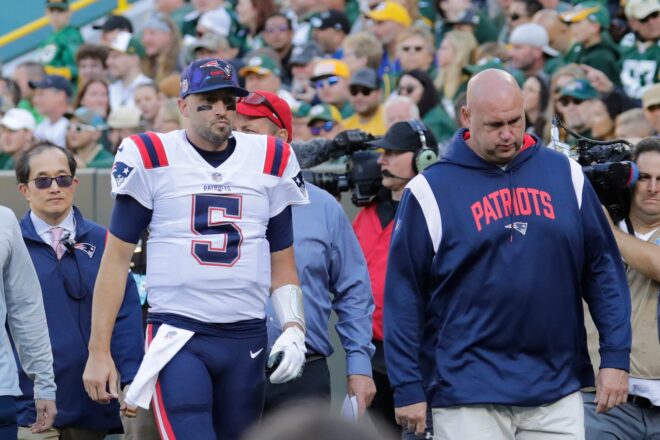 Some thoughts coming off of Sunday’s loss in Green Bay:

1) The Patriots’ overtime loss to the Packers is yet another one we can add to the list of games that got away this season.

The fact they were even in at all was certainly a surprise considering that back-up quarterback Brian Hoyer made it essentially 10-minutes through this contest before the Patriots had to turn to rookie Bailey Zappe to try and salvage all the work they put in this week.

Hoyer was taken out of the game thanks to a hit by Packers linebacker Rashan Gary, who sacked him on just the Patriots’ second offensive series, which apparently resulted in a head injury for Hoyer.  As Hoyer walked back to the locker room, Zappe strapped on his helmet and prepared for what turned out to be a pretty good performance by the rookie.

While things got off to a shaky start thanks to the fact his first drive was plagued with a penalty by Isaiah Wynn, which put him in a tough spot (more on that later), Zappe started settling down as the game went on and the coaches slowly loosened the leash and allowed him to make some plays off play fakes, which ended up working out pretty well.

But in crunch time, the coaches took the ball out of his hands completely, and that will likely be a big conversation this week given that it essentially cost them the football game.

After the Patriots got the football back at the two-yard line with just under two minutes to go in regulation, Bill Belichick decided to play it safe and he had the offense run the football three-straight times, wiping all the remaining time off the clock and electing to play for overtime.

That strategy made some sense, given that it would have been a big ask for Zappe to drive the ball down the field considering they were buried deep in their own end.  Their defense had done a good job against Aaron Rodgers to that point, so it appeared he felt more confident to take another shot with potentially better field position in overtime.

He got his wish.  The defense came up with a three-and-out on the Packers’ first possession and rookie Marcus Jones set them up perfectly with a 20-yard return that gave Zappe and the offense the football near midfield at their own 49-yard line.

It all seemed to be lining up for Nick Folk to get a shot at kicking the game-winner while potentially allowing them to head back to Foxboro with what would have been a massive upset.

For some reason, they instead played scared.  Despite being at midfield, they continued forcing Zappe to hand off the football, skipping mixing in a pass before third down, which had been one element of surprise that had allowed Zappe to create some space and make what throws he did complete Sunday.

After two straight handoffs, the second of which went nowhere, Zappe and the offense was in an obvious passing down with a 3rd-and-5.  As expected, everyone dropped back into coverage, leaving Zappe with little room and he couldn’t quite complete his pass attempt to Hunter Henry.

Bailey punted the football back to Rodgers, which was the dagger.  After asking the defense to come up with yet another stop, it was just too big of an ask and Rodgers ultimately led them down for the game-winning field goal.

It’s frustrating.  When you’re forced to rely on a rookie quarterback, you might as well see it through if he’s done enough to that point to make you feel like he might be able to make a throw or two to help give you a shot to win the game.  Instead, they played scared when it mattered most instead of sticking to what had gotten them to that point to begin with.

Now they head back to Foxboro at 1-3 where they’ll simply add this to the list of games they should have – and definitely could have – won.

2) Isaiah Wynn should get a fair amount of scrutiny after this game, especially considering he’s been plagued with mental errors and poor play over the last few weeks.  Sunday ended up being more of the same, with New England’s loss to the Packers adding yet another black mark to what’s been a poor season for him to this point.

He was the culprit behind the sack on Hoyer, which knocked the quarterback out of the game.  He then followed that up with yet another false start during the next series that put Bailey Zappe in a long-yardage situation on his first drive.

We’re barely four games in and it’s a little astounding at how often his name continues to be mentioned, and obviously not in a good way.  For a team with little margin for error as it is, the fact Wynn continues putting them in tough situations remains frustrating.

The advantage he has at this point is the fact New England doesn’t have a better option, which likely means we’re going to have to continue to just cross our fingers and hope he eventually comes around. 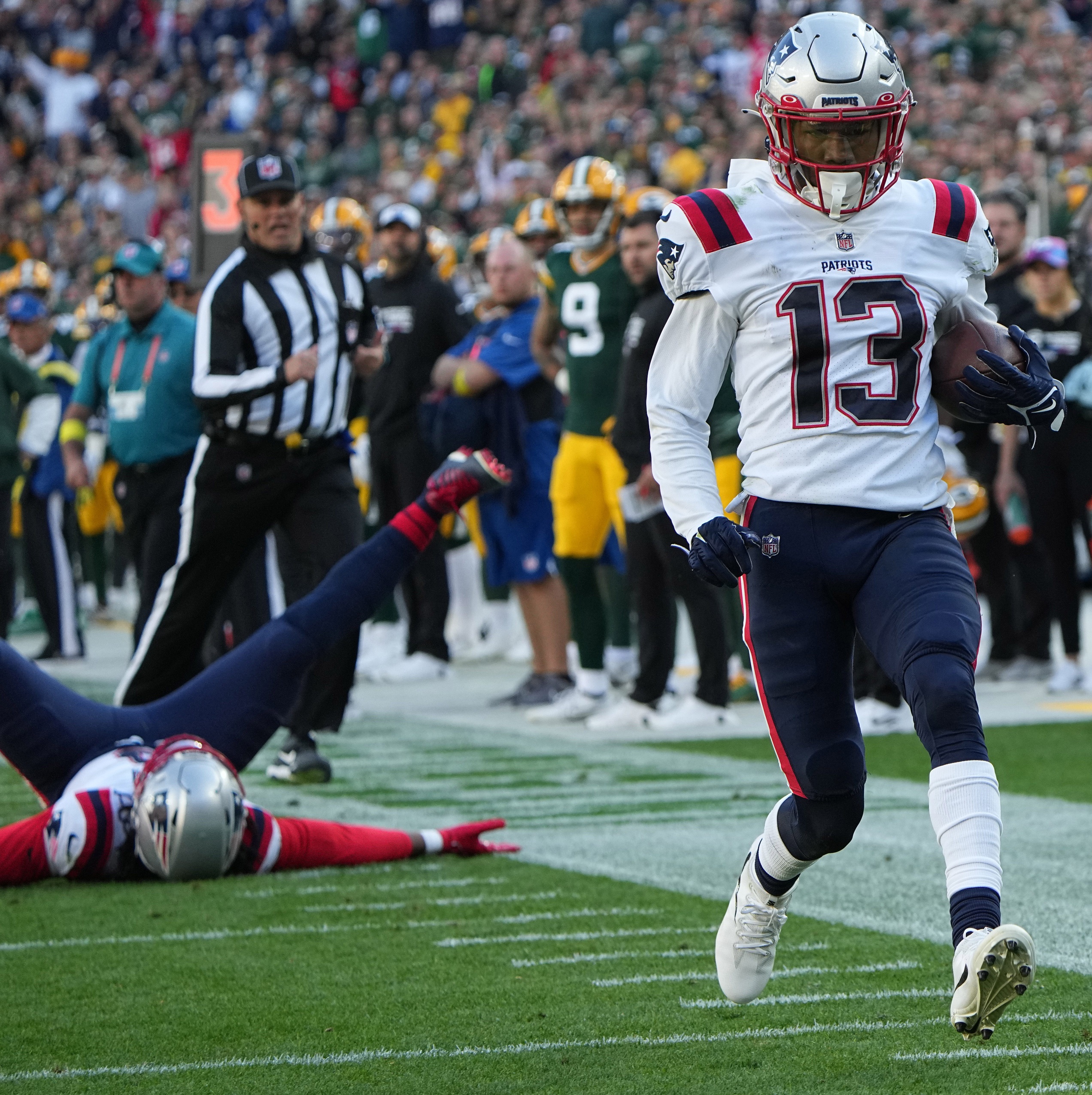 3) Rookie defensive back Jack Jones was one of the bright spots on defense on Sunday, with Jones forcing a fumble and a recovery, as well as an interception that he made just before the end of the half where he jumped a pass from Rodgers to Allen Lazard and took it back 40-yards the other way for the touchdown.

That score put New England up 10-7 at the half, and definitely appeared to give the Patriots back the momentum and put the Packers on their heels going into the locker room.

Overall, Jones finished the night with seven tackles to go along with his turnovers, which was something most people thought would happen at some point.  He had gotten additional snaps thanks to Jalen Mills being inactive and he clearly took advantage, which was definitely something they needed.

His emergence has been a pleasant surprise and it should be fun to see if this ends up being just the beginning of more good things to come from the rookie.

4) One of the most impressive stats from Sunday’s game was the fact that in the second half, the Patriots did a good job of moving the chains without ever really putting themselves in a tough spot.

They ran 20 offensive plays in the second half of Sunday’s game, which saw them face just two third downs over that entire span.  Both Rhamondre Stevenson and Damien Harris were terrific, with each player carrying 7 times as Stevenson rushed for 45 yards, while Harris rushed for 43-yards including a touchdown.

During those possessions, New England ran play-action off of a couple of those plays, which played a key role in Zappe’s perfect second half.

Still, while it’s understandable that the coaches tried to limit Zappe’s exposure down the stretch, the fact they didn’t do it in overtime was ultimately the difference.  The two backs put them in position for the win, but asking them to keep it going all the way to the end without Zappe making a couple of additional throws was just too big of an ask.

5) While it’s OK to be a little frustrated with some of the playcalls and decisions, anyone who continues to bash Belichick overall should hopefully start to realize that it’s definitely not warranted.

This is a team that has played above expectations, with the defense clearly being one of the biggest surprises of the season.  In fact, most of their issues have stemmed from personnel problems from in-game losses, forcing them to have to react on the fly and it’s put them in some tough spots.

Last week’s loss of Lawrence Guy exposed the middle of the run against Baltimore and two weeks ago it was the loss of Adrian Phillips in Miami that set up that blown coverage that Miami scored on.

When you take each of those situations in context, the defense has been prepared well enough where it’s been turnovers by the offense that have been the difference.

Seeing how well they held Rodgers in check Sunday was yet another reminder of how good they’ve been, with the game plans and preparation being about as close to perfect as you could ask for.

This is a team that has the talent but just hasn’t been able to do quite enough to push themselves over the hump.  Again, the conservative calls at the end will certainly be scrutinized, but the overall plans have been more than enough to get them where they should be.  That even includes Matt Patricia, who called a pretty solid game on Sunday.

The one bright spot is New England comes away from this game knowing they can hang with anyone, regardless of who is out there.  While the players can feel confident the coaches will put them in the best position to win, how Sunday ultimately finished was a reminder that they also, rookie or no rookie, need to have the confidence to just let the players go out there and get it done.

Good observations. Winning with Wynn is proving difficult. The coaching is sound. Yes, probably a bit too conservative late with Zappe, especially in OT with such good field position, though I totally agree with them running out the clock starting at the 2 yard line at the end of the 2nd half and punting near mid field with 4th and 5 in OT. I’ve thought all along this is a rebuilding year and now more than ever believe that. Next year, if Jones improves, we can start thinking bigger and better.