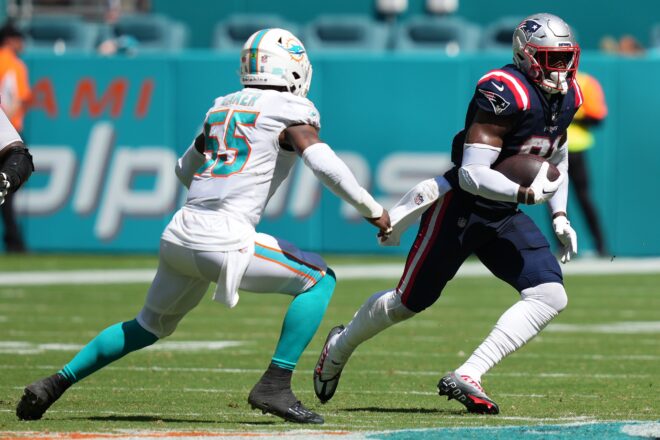 Patriots lost to the Dolphins at Hard Rock Stadium in Miami by the score of 20-7.  The score was not indicative of the game.  Miami’s victory was never in doubt.  Two big plays, the strip sack on an unimpeded Blitzer for a TD, then with a 4th and 7, as the half was coming to an end, Waddle split the safeties for a 42-yard TD.  Speed kills, Waddle and Hill just burnt the Patriots’ secondary.

One of the biggest points coming out of this game was the lack of playing time for Kendrick Bourne.  His one play was a 41-yard bomb down the sideline in which he clearly beat his man (separation).   When are the Patriots coaches going to learn that Jakobi Meyers and Davante Parker play the same position?  There should never be a time when both players are on the field at the same time.  In my preview of the Dolphins, I cited the analysis done by Warren Sharp.  He stated that Parker is the worst player in the league in getting separation.

In the last three years, he has been 3rd worst, worst, and worst.  Parker is strong on 50/50 balls, but everything is 50/50 with him.  Sharp talked about the “aggressiveness” factor.  Tua Tagovailoa had the highest number of aggressive throws, those forced into smaller windows, in the league.  Those aggressive throws are more likely to be knocked away, tipped, and intercepted.  Parker was the main factor.  Now he is in NE.  Parker was not open on the long pass in the opening drive.  It was a poor decision by Mac Jones to throw it, especially when Xavier Howard was covering Parker.

When I say Meyers and Parker play the same position I mean they can’t get separation.  Play them in the slot but not at the same time.  Play Nelson Agholor and Kendrick Bourne outside to utilize their speed.   Trading for Parker was a huge mistake.

By: Steve Balestrieri
Jerod Mayo and Steve Belichick, after playing tight man coverage all day, laid off the ball and allowed big cushions, which Rodgers exploited
22 hours ago