3 weeks ago at 11:25 am ET
Follow @IanLogue
Posted Under: Patriots News 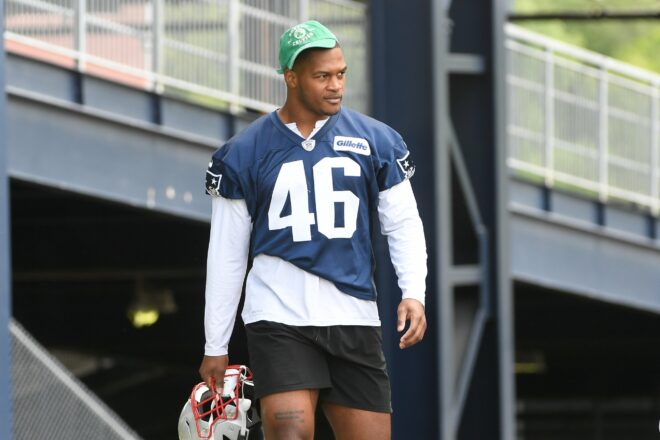 – Today is the first day of training camp for the players, with everyone having reported to Foxboro ahead of tomorrow’s first public session.  Things kick off on the practice fields behind Gillette Stadium beginning at 9:30am, with gates set to open at 8am.  Be sure to also double-check the team’s website before heading out in case of any schedule changes, but fans should finally have the chance to see the team back in action on Wednesday morning.

– According to the league’s transaction wire, New England Patriots linebacker Raekwon McMillan passed his physical ahead of training camp.  It had been reported that the linebacker would start training camp on PUP, but the fact his name popped up having passed a physical could be a step in the right direction.  McMillan suffered an ACL injury about a year ago but seemed like he was in good shape to make his return this season, especially after seeing a lot of action during OTAs.  As a result, this could potentially be good news and will obviously be something to watch as the players finally begin preparing for the upcoming season this week.

– After New England waived defensive tackle Byron Cowart on Friday, the Indianapolis Colts claimed the former Maryland Standout on waivers one day later.  Cowart was a former fifth-round pick taken in the 2019 draft by the Patriots and played in five games as a rookie, as well as seeing additional time when he started 14 games in his second season.  It ended up being a fairly productive year and included a sack along with one pass defended.  Unfortunately, he took a step back after starting 2021 on PUP and never came off of it and it’s obvious that the club opted to move in a different direction heading into 2022.

– Former Patriots receiver Danny Amendola has apparently decided to call it a career and retired from the NFL on Monday.  According to ESPN’s Adam Schefter, Amendola will now pursue other interests which could include moving to one of the various broadcast networks.  Amendola, who won two championships during his time in New England, said of his NFL career, “It was better than I could have ever imagined,” and said he’s excited for the future.

– The Patriots obviously have some key areas to watch in the coming weeks, with the secondary certainly among them.  New England saw J.C. Jackson depart during free agency this offseason and ended up signing Malcolm Butler and Terrance Mitchell, while also likely hoping for growth from Jalen Mills and a solid return from Jonathan Jones, who looked outstanding last season before suffering a season-ending injury.  They also drafted Jack Jones and Marcus Jones, with Jack already making a solid first impression during OTAs.  Marcus is coming off of an injury in college but we’ll hopefully see him out there to see what he can do in the weeks ahead.

– NBC Sports Boston’s Tom Curran believes that this group remains an area of concern, which he feels could ultimately be a key factor of how things go this season.  “I understand why the Patriots said goodbye to both Stephon Gilmore and J.C. Jackson in the past calendar year. I don’t understand why drafting a corner earlier than the fourth round this year wasn’t a priority,” writes Curran.  “Maybe Jack Jones will be Asante Samuel 2.0 — it appears he’ll have every chance to make a case — but there’s no way to look at the current corner depth chart and feel awesome about it dealing with the artillery the Bills and Dolphins are rolling out.”  Curren also notes that both Mills and even Joejuan Williams emerging might potentially turn things, but he believes that what we see in training camp from this group is potentially one of the biggest storylines of this preseason.

– With training camp getting underway, things will be shifting here a bit.  We’ll have a daily wrap-up here along with a player news tracker, which will allow you to keep up with news and information about various individual players.  We’ll also obviously have various news updates and snippets available as well, so be sure and check back each morning and subscribe below as we’ll be condensing everything into one easy-to-read email each day as well to keep you up to date.

– Out in Cincinnati, Bengals president Mike Brown let everyone know that getting an extension done with quarterback Joe Burrow remains a key priority and their goal is to make sure he remains there for years to come.  “I can tell you that we couldn’t be happier with Joe Burrow,” Brown said via USA TODAY. “He’s everything you would wish for, especially for a quarterback in Cincinnati. Our whole focus is going to be on keeping him here.”  It should be interesting to see what type of money Burrow garners, as contracts with quarterbacks have already surpassed the $40-million annual mark, which will likely play a factor in how things go with Mac Jones when he eventually gets toward the end of his own rookie deal.  Burrow will be eligible for an extension after this season.

– Former Alabama receiver John Metchie III is trying to stay positive after being diagnosed with Acute Promyelocytic Leukemia.  Metchie called it “the most curable form” and he’s looking forward to hopefully getting through this and eventually coming back “stronger than ever”.  “Recently I was diagnosed with APL (Acute Promyelocytic Leukemia), the most curable form of Leukemia,” wrote Metchie in a statement.  “I am currently receiving great medical care, am in good spirits and I expect to make a recovery at a later point in time.  As a result of this diagnosis, I will likely not be playing football this season.  My main focus will be on my health and recovery.  Thank you in advance for your support and well-wishes.  I cannot wait to come back stronger than ever.  God bless.”

– Out in San Francisco, it sounds like they’ve finally closed the book on Jimmy Garoppolo.  Head coach Kyle Shanahan said recently he doesn’t expect Garoppolo to practice with the club this preseason if he isn’t traded.  “I think anything’s possible but that would surprise me right now,” said Shanahan on a recent podcast with Tim Kawakami via ProFootballTalk.com.   Shanahan also went on to say he hasn’t seen Garoppolo since the end of last season, which is certainly telling as it pertains to the current situation with his soon-to-be-former quarterback.

By: Ian Logue
Some bad news for veteran defensive back Malcolm Butler, who saw his comeback season come to an end before it really got started.
11 hours ago

By: Robert Alvarez
The best social media sights, sounds, and notable moments from day thirteen of Patriots training camp in Foxborough with the Panthers.
23 hours ago