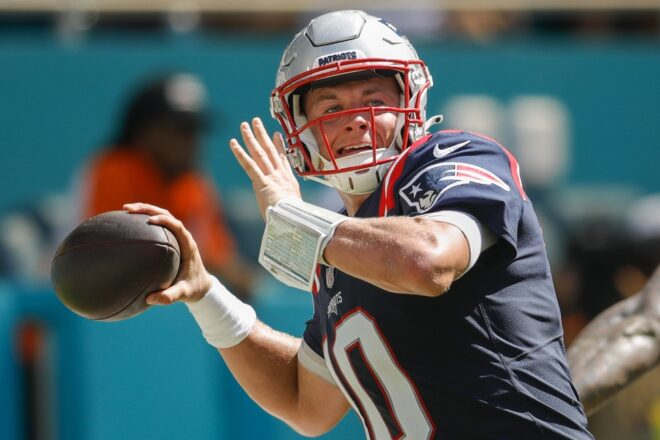 Some thoughts as the New England Patriots ended up on the wrong end of a 20-7 opening day loss against the Miami Dolphins on Sunday:

1) One of the biggest concerns heading into Sunday’s game was how well the Patriots would deal with the speedy Tyreek Hill, along with teammates Jaylen Waddle and Cedrick Wilson.

The answer?  Actually, they did a pretty good job.

Defensive back Jonathan Jones ended up dealing with Hill for most of the contest and the veteran defensive back did a more than adequate job.  Hill was targeted 12 times with 8 receptions for 94-yards, but Jones did a solid job in limiting several of those plays and making Hill work for the majority of those yards.  While Hill clearly had his moments, the Patriots did more than enough to contain him and it should have made this game more competitive than it was.

Instead, untimely turnovers and mistakes ultimately were the difference in this one, which saw the Dolphins make New England pay for each one of them.

The Dolphins were also were aggressive and held little back when it came to trying to capitalize on every opportunity.  One of the most obvious came as time was winding down in the second half after the Dolphins decided to take advantage of the loss of safety Adrian Phillips, who went down on a 3rd-down play with a reported rib injury with less than a minute left in the first half.

Facing a 4th-and-7 from the Patriots 42-yard line and just 0:24 left to go in the half, head coach Mike McDaniel claims his analytics guys recommended going for it, which is the direction they went.  In reality, McDaniel likely smelled blood and realized they could attack a secondary that hadn’t had a chance to adjust to Phillips coming off the field one play earlier.

As a result, he called a play and Tua Tagovailoa threw a perfect pass right into the center of their secondary where Phillips likely would have been to Waddle, who slipped past Jalen Mills and blew past Ja’Whaun Bentley, who was back there in coverage and came over to help but never had a chance.  Kyle Dugger was also back there, but he took a bad angle and Waddle glided past him after making the reception and was off to the races, taking off 42-yards for the touchdown as Miami went up 17-0 at the half.

Given that the defense only gave up 13 points, they did about as much as could have been expected but the offense just couldn’t get anything going.  Give the Dolphins credit, this is a football team playing with a lot of confidence offensively and it showed on Sunday.  Unfortunately, New England struggled to get anything going themselves and it ended up being a long afternoon.

2) Speaking of Dugger, despite the aforementioned play, he was outstanding all afternoon, making some terrific open field tackles along with shutting down several plays that were just unreal.

He had a slight scare in this one after blowing up Hill following a reception on a 3rd-and-1 at the Miami 35-yard line.  He drove the receiver back and took him down, with Hill catching Dugger in the groin with his knee as they were going down.

Dugger was on the ground for a bit after the play, but he was able to stay in the game and finished the contest.

But he established himself as a key playmaker in a defense that is going to need every little bit from each one of their players.  What was apparent on Sunday was the fact they were definitely faster as a group than what we saw last year, especially on several plays where guys tried to get outside and for the most part, New England’s defenders were able to make the tackle.

Again, Miami had their moments, but for a group that looked fairly slow back in January in pursuit against the Bills, the difference against the Dolphins was striking and should give fans a reason to be a little more optimistic.

3) Mac Jones will be the man who will likely be getting plenty of scrutiny this week, but it’s probably safe to say that save for the opening drives of each half, they didn’t seem like they had him in the best of situations.

The protection was decent, for the most part, but Miami did a good job of moving guys around and disguising blitzes, with neither Mac or the coaching staff seemingly picking up on them.  And when they got to him, they definitely punished him.

Jones’ early fumble, which the Dolphins scooped up and ran in for the touchdown to take an early 10-0 lead, was certainly a good example.  They blitzed a safety in from the outside and he drilled Jones on his blind side, ripping him around and Jones never saw him coming.

He took a couple of brutal shots in this one, which saw him step up under pressure on a deep ball and pay for it, followed by another early in the fourth quarter where he got hit low initially and took another shot up high, which left him slow to get up on a play where Miami would have been flagged for a roughing the passer call, but David Andrews was called for a chop block, which ended up offsetting the penalty.

Jones getting hit sort of a theme at various points last year, including some brutal shots he took early in the season in 2021 that left most people surprised to see him bounce back up and move on to the next play.  The later ones he sustained on Sunday seemed to affect how he threw the football on some of his straight-line throws and after the game, several reporters spotted Jones head to the x-ray room with a reported back injury.

Fortunately, those x-rays reportedly came back negative, so Jones appears to have dodged any bullets in terms of any potential injury.  But regardless, in a 17-game season, they’re going to need to do a better job of keeping the 24-year-old out of harm’s way.

4) As the Patriots continue trying to establish this new offense, it’s pretty obvious that their problems seem like they may go well beyond the scheme, which is definitely a little concerning.

Personnel-wise, DeVante Parker seemed to get most of the snaps with Nelson Agholor and Jakobi Meyers, which left Kendrick Bourne as the odd man out as Hunter Henry and Jonnu Smith saw a large portion of the snaps.

Parker still doesn’t quite seem comfortable offensively and the early interception by Jones on their first drive was frustrating in the fact that after Jones didn’t quite get enough air under it, the defender essentially climbed up Parker to go after the football, holding his arm and preventing him from being able to go up to try and contest it.  Still, Parker should have done a little more to at least make sure Miami didn’t end up with it, especially down in the red zone.

The knock against Parker has been his apparent inability to create a lot of space, but he’s also been a guy who has been competitive in coming away with the football.  That’s essentially made up for the lack of athleticism, which was one of the reasons why New England went out and acquired him, which allowed them to finally move on from N’Keal Harry.

While that idea seemed like a good one, by the time we got to the second half, it was clear that New England needed Bourne’s athleticism.  Unfortunately, it wasn’t until the end of the game when things were well out of hand that Bourne was finally a factor.  Jones found him for a 41-yard pass that got them into Miami territory, but a lost fumble by Nelson Agholor two plays later thwarted any shot at a comeback.

Either way, something doesn’t seem quite right when it comes to Bourne, who was the subject of trade rumors during the preseason despite being one of New England’s most productive receivers last season.  Hopefully, whatever the issues, they get figured out because they need to make sure Jones has every last player at his disposal as they try and get right and figure things out in the coming weeks.

5) All that being said, it doesn’t change the fact that turnovers in this contest ultimately were the difference in this loss.  In fact, that’s been true during what is now a four-game win streak by Miami over New England, and that’s been a disturbing theme in each of these post-Tom Brady contests.

They ended up on the wrong end of things again on Sunday, which saw them fumble away the football twice as well as Jones’ earlier interception.

That was the statistic that stood out.  Miami fumbled twice but didn’t lose it, while New England coughed it up twice and lost the football both times.

As we know, winning games is tough enough in this league without giving away the football, and the Patriots couldn’t quite catch a break.  New England’s defense knocked out the ball twice but just couldn’t get one, with one happening near the sideline and out of bounds, while another happened to bounce right back to Miami.

The Patriots also had a couple of shots at interceptions, one of which saw rookie Jack Jones go up for a ball against Hill, and he had both hands on the football.  Unfortunately, Hill pulled it away and held on for the catch, but the rookie continues to have moments where, if he eventually ends up on the right side of these, he could become quite a factor in their defense.

But this is becoming a surprising theme for a team that has always been better when it came to ball security.  Unfortunately, Miami kept that edge and it’s the reason why New England is heading back to Foxboro on the wrong end of a frustrating loss.

The Patriots will now have to prepare for another tough road game, this time against a Pittsburgh Steelers team that did a number on the Cincinnati Bengals during a 23-20 overtime win on Sunday.

How Was This Article?
Posted Under: 2022 Patriots Season

By: Ian Logue
Some good news on Wednesday as rookie wide receiver Tyquan Thornton was out at practice, which hopefully marks the start of his return toward getting…
1 hour ago

By: Ian Logue
Patriots quarterback Mac Jones was back at practice again on Wednesday, which doesn't make much sense given the severity of the high ankle sprain he…
2 hours ago

By: Russ Goldman
In this episode, we look back at the Patriots loss to the Packers, and then we look ahead to the Lions game.
4 hours ago

By: Ian Logue
The New England Patriots are continuing to get ready for the Detroit Lions this weekend, with Bill Belichick's team trying to avoid their third straight…
7 hours ago

By: Steve Balestrieri
Jerod Mayo and Steve Belichick, after playing tight man coverage all day, laid off the ball and allowed big cushions, which Rodgers exploited
1 day ago
wpDiscuz