2 months ago at 11:47 am ET
Follow @IanLogue
Posted Under: Patriots News 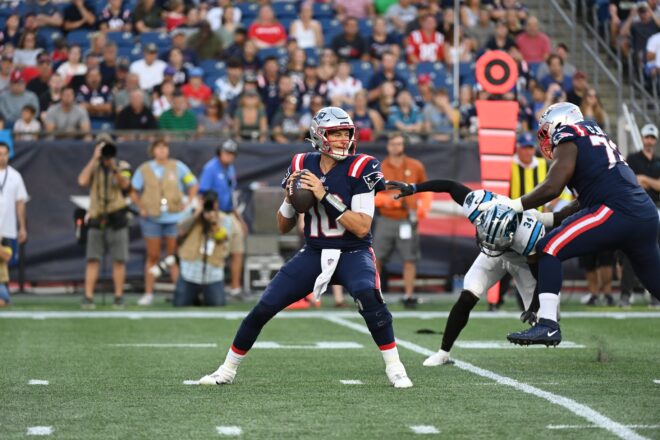 – Friday night’s New England Patriots win over Carolina was a nice step in the right direction for an offense that started off slow but finished strong.  The better part of that was the fact that some of those early issues were just a lack of continuity while appearing in a live game, with Mac Jones and company eventually settling down and putting together a scoring drive to get on the board.  While Jones finished the night just 4-of-8 for 61-yards, the numbers don’t necessarily tell the whole story.  Jones initially started out 0-for-3 before hitting four of his final five throws, which included two third-down conversions to Nelson Agholor and Ty Montgomery respectively, as well as a perfectly thrown ball to Agholor that went for 45-yards and helped set up Montgomery’s touchdown.   To finish on a high note like that was definitely a positive sign and that’s exactly what you hope to see at this point in the preseason.

– Wide receiver Lil’ Jordan Humphrey continues to make a strong case to earn one of the final receiver spots after what has been a terrific training camp.  Humphrey put together another nice showing Friday night after hauling in 5 receptions on 6 targets, but his play on special teams likely earned him some extra praise from the coaching staff.  His display late in the fourth quarter where he completely laid himself out and knocked the ball back inside the goal line after a nice punt by Jake Bailey was just a great play.  His effort allowed Brenden Schooler to down it at the four was terrific and plays like that are often the difference at roster cut-down time.  With rookie Tyquan Thornton, unfortunately, suffering an injury during the game, the door is open for Humphrey to potentially earn his way onto the roster for one of the final wide receiver slots.

– Running back J.J. Taylor had his best showing of the preseason, with Taylor carrying the football six times for 33-yards while showing some nice explosiveness.  More importantly, he had one play where he made a nice block on a blitz by Carolina, which was nice to see.  Taylor has grown quite a bit as a player over the last couple of seasons and despite a fairly deep group of backs, he’s made a pretty strong case for himself this preseason.

– Defensively, cornerback Shaun Wade is another player who stepped up in a big way Friday night.  Wade’s interception early in third quarter was outstanding, with the defensive back breaking on the ball and making a leaping grab on a 2nd-and-2 after Carolina had been driving and would have been deep in New England territory.  He’s also been fairly good in coverage and has played a role in the fact the Patriots’ secondary has been better than expected thus far.

– One player who has struggled mightily this preseason is wide receiver Josh Hammond, who is probably having one of the most difficult training camps we’ve seen in a while.  He’s had zero luck in games so far, although it’s definitely not from a lack of targets.  He’s 0-for-7 to this point catching the football, with all seven of those targets coming from Bailey Zappe.  That’s not exactly what you want to see and it’s probably the first time we’ve ever seen a player come up without a reception considering that number of targets.

– Meanwhile, New England’s linebackers played well, with Raekwon McMillan and Anfernee Jennings again doing some nice things.  McMillan has really shown off his athleticism and has definitely come quite a long way since the start of preseason, while Jennings also continues to impress.  This group as a whole along with Mack Wilson and Josh Uche have really done a great job and when you add in Matthew Judon and Ja’Whaun Bentley, it’s a unit that seems like they have the speed and talent to be competitive.  It’s amazing looking back around draft time when there were so many questions about each of these players and the fact they’ve collectively performed this well is probably one of the biggest surprises of the preseason.

– Rookie Sam Roberts continues to make a strong case for himself and he’s been one of the best stories of camp so far.  Looking back at the film from what we saw despite coming from a small school, Roberts has basically just picked up from where he left off in college and carried that over into the NFL.  It’s going to be a lot of fun to see what he does when he gets time with the starters but he’s just an unbelievably hard-working kid and it’s been great seeing him have the success he’s had at this level through two games.

– One other transaction over the weekend was the fact the Patriots waived tight end Dalton Keene.  Keene joined Devin Asiasi as one of the two tight ends the club elected to take in the third round of the 2020 draft, with the former Virginia Tech standout being a big athletic player who had some versatility coming out of college.  Unfortunately, Keene hasn’t been able to stay healthy and his absence during camp, along with the continued emergence of Asiasi, likely played a key role in the club deciding to move on.  The third-year player appeared in just six games over his career, finishing with 3 receptions for 16 yards during his time in New England.

– The Patriots have a big week ahead as they’re in Las Vegas to prepare for the Raiders in another group of joint sessions before their final preseason game of the year.  With oppressive heat in the forecast (today’s forecasted temperature is 107, followed by 108 on Tuesday and 105 on Wednesday), it’s actually a nice way to prepare for Miami, who they’ll open the season with in two weeks down in Florida to kickoff the 2022 campaign.

By: Steve Balestrieri
Goff has been lighting it up this year (11TDs, 3 INTs) and has plenty of options to pick from, even being short-handed.
9 hours ago

By: Mark Morse
Coach Dan Campbell has the Detroit Lions working hard and together as a team despite a rash of injuries.  Don’t dismiss their 1-3 record.
9 hours ago