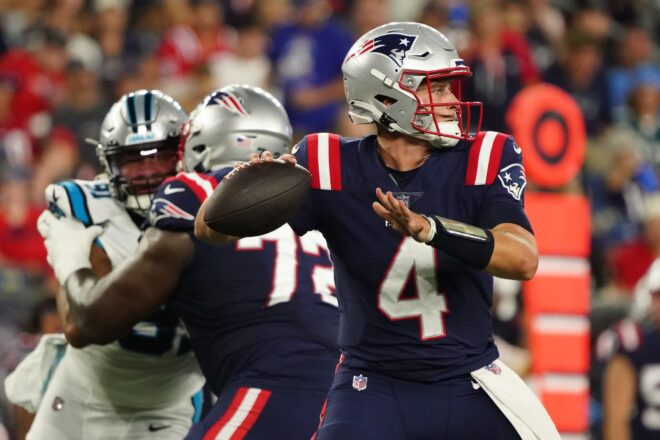 FOXBOROUGH – This column correctly predicted that we would see more of Mac Jones in the second preseason game.

And see him we did, for the entire first quarter. The Patriot varsity offense was pitted against the second defense of the Carolina Panthers. Head coach Matt Ruhle elected to keep out his starters on both sides of the ball, largely due to the fact that the teams had two very contentious (at times) joint practices this week. So Patriot fans were denied the chance to see two former AFC quarterbacks, Baker Mayfield and Sam Darnold, duke it out for the starting job for the Panthers. But they got to see Jones.

Mayfield and Darnold be hanged. Jones is the man everyone at Gillette Stadium came to see on Friday night. Jones was long gone and a distant memory when a late strip sack in the end zone sealed a 20-10 Patriot win. The key score of the game was 7-3, which was the score at the end of the third offensive possession, and the Patriots had the 7.

That said, the first quarter really hinged on two plays, one on each side of the ball. The Patriot defense did a good job in keeping Matt Corral, the third string quarterback at the moment for Carolina, holding him to 58 yards passing and 9 of 15 passing.

Most of those passing yards came on one play on their third offensive series, the only real bad play of the evening for the varsity defense. Facing second down and 8 at their own 49, Corral found Giovanni Ricci on a left slant pass for 21 yards against a vanilla Patriot zone defense. On the play, Christian Barmore took a very ill-advised cheap shot at Corral, tacking on another 15 yards. Carolina was suddenly at the Patriot 15, and four plays later Zane Gonzalez kicked a 27-yard field goal to give Carolina a 3-0 lead.

Jones was zilch in his first two offensive series, going three and out both times. The first drive ended with him throwing a sure first down pass on a slant route behind new Patriot Devante Parker, then was sacked on the next play by Julian Stanford. The second drive stalled after Jones overthrew Jakobi Meyers on what should also have been a sure first down. Jones looked like early in the preseason instead of the dress rehearsal game, off kilter and not in sync with his teammates.

The third possession made everyone feel better.

Jones led the Patriots from their own 20 to their own 42. Nelson Agholor ran a deep left sideline route, and Jones laid it right in there for a terrific looking 45-yard completion. On the next play, Jones scared everyone half to death with an eight-yard scramble where he slid at the end just as he was about to get clobbered. Two plays later, new running back Ty Montgomery blasted into the end zone from two yards out to make it 7-3 Patriots and end the evening for all the starters.

So…if you judge the game and the evening from this point forward, Bill Belichick has to be mostly, but not completely, happy. The defense was solid, but Barmore cannot lose his head and hit the quarterback like he did (and it happened again later in the game by James Ferentz). Jones looked very good on the third drive but very rusty on the first two drives. Nobody suffered any serious injuries, but Jones got sacked once and had that scramble, and was also driven to the ground on a play early in the second quarter where he was lucky he didn’t separate his shoulder.

Now for some general anecdotal thoughts on the rest of the game:

Bailey Zappe played the entire second half. He finished 16 of 25 passing for 173 yards, one interception and a 67.6 passer rating. The one interception was a very poor pass in the left flat that resulted in a 50-yard pick-six by Tae Hayes that tied the game at 10-10 at the time. His leading receiver was Lil’Jordan Humphrey who had five catches for 71 yards and a 14.2 average per catch. Tre Nixon, his favorite receiver last week against the Giants, had the most catches (six) but only 56 yards.

Once again, Belichick must address penalties. Friday night saw a whopping 12 penalties called against the Patriots for 104 yards. Barmore and Ferentz should be spoken to sharply for the two late cheap shot hits, but these hits may be a by-product of the chippy practices the two teams had this week. Ferentz, for example, was one of the Patriot players ejected from one of the practices this week for fighting, and this is the son of an established head coach (Iowa’s Kirk Ferentz) we’re talking about. Another egregious penalty wiped out a late safety, as an intentional grounding penalty in the end zone by Corral was offset by an illegal use of hands penalty on Damarcus Mitchell.

The Patriots did not show their opponents much of anything as far as game planning went. Their defense played mostly zone coverages, while their offense was close to the vest and nothing astounding or eye-popping. J.J. Taylor led the Patriots with 33 yards rushing, but his average was 5.5 yards per carry. Other than that, there was no attempt to show off any rushing attack and instead left most of the game to see what the Patriots have in Zappe.

Right now, you could say that Brian Hoyer might still have the inside track to the number two quarterback job. Zappe looks good at times, but doesn’t leave you with the feeling that he should be bumped ahead of Hoyer on the depth chart. Zappe remains mostly an intriguing pick, someone who put up big passing numbers at a mid-level school in a mid-level conference. He is playing what may be categorized as good August football, but as you should have learned over the years, August heroes often turn into either September’s practice squad or someone else’s treasure.

The Patriots finish the preseason next week in the desert heat of Las Vegas. Josh McDaniels is now the head coach of the Raiders, and Derek Carr has his old Fresno State buddy, Davante Adams, back on his side again. Carr and Adams will probably not play, but McDaniels will be enough fodder this week for a ton of articles and opinions. The teams will hold joint practices before their game at Allegiant Stadium next Friday night.

One more week to see how things are going to go this year. Seeing how well you do against McDaniels instead of with him will give Belichick a good look-see at what he really has heading into the season opener at Miami. Las Vegas will have triple-digit temperatures, and the practices, as well as the week, will be at least that toasty warm.