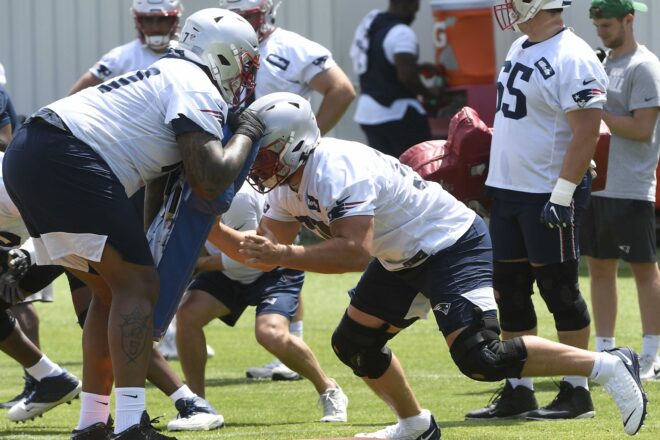 After a three-day break following the preseason opener against the New York Giants, the Patriots returned to the Foxborough practice fields on Monday in preparation for joint sessions and a game with the Carolina Panthers.

The morning practice had a light feel as all players were in shorts and shells with only 11-on-11s occurring. Full pads will return Tuesday and Wednesday with the Panthers.

Nelson Agholor continued his strong summer, recording two one-handed touchdowns on Jonathan Jones and Jalen Mills. Whether or not he remains a Patriot by week one remains to be seen, as trade rumors involving his name and moving his current salary continue to pop up.

Additionally, receiver rookie Tyqan Underwood continues to impress after catching a touchdown pass in the corner of the end zone from Bailey Zappe with Jack Jones in coverage.

As for the defense, Henry Anderson and LaBryan Ray each recorded a sack. Jack Jones forced a pass breakup.

Prior to practice, head coach Bill Belichick offered some high praise for Ja’Whaun Bentley, who is entering his fifth season.

“Ja’Whaun’s got great leadership ability, I think you saw that all the way — however far you want to go back — but even going back to DeMatha, high school, and his role there and some of the things we talk about in high school, then of course at Purdue,” Bill Belichick said. “… He’s really come in and grown from his rookie year. He’s had a very strong voice, but not overpowering. But he has really good leadership. Each year it’s gotten better.”

Bentley signed a two-year contract to remain with the Patriots back in March.

The Patriots will welcome the Panthers in for two joint practices, each open to the public on Tuesday and Wednesday at 9:30 am before their 7:00 pm game on Friday.  NOTE: Those dates will be the last public practice sessions of the summer.

You can view some of the best social media sights and sounds from day twelve below.

Mac to Agholor in the corner of the end zone to wrap warmups pic.twitter.com/A60VPx6FZ4

During an 11-on-11 period at 3/4 speed, he spiked his whistle and yelled some pretty good curse words. Might have been mad at the chain gang.

In goal line drills, Nelson Agholor just made a great contested catch with Jonathan Jones hanging on him in the back corner of the end zone

Plays of the day: Mac Jones and Bailey Zappe hit Nelson Agholor and Tyquan Thornton, respectively, for a pair of-the-shoulder TDs in the corner of the end zone. Beat Jon Jones and Jack Jones.

Jack Jones also has a couple of PBUs.

Patriots are ending practice with a 2-minute drill. Mac Jones finishes it with a touchdown pass to Nelson Agholor.

He’s been the best WR today

Tyquan Thornton just showed off his insane pull away speed on a go route. He was gaining separation up the sideline but it looked effortless.

Before the Patriots break at the end of practice, players gather around Matthew Judon and sing to him on his birthday.

Matt Patricia has really dug into his role working with the o-line… he spent some time bending rookie Cole Strange's ear between drills during #PatsCamp this morning. pic.twitter.com/R0vNePrZU7

Top things that stood out from the Patriots’ 12th practice of training camp — the appetizer to the main menu. pic.twitter.com/0qlH8WTeRJ

Mack Wilson said after practice that Mayo is the best linebacker coach he’s ever had. https://t.co/Zi2zzWpFHf

"Competition will go up. It has to or you will get your ass beat."

Trent Brown is a tall fellow. He’s the only player we don’t have to tilt down to shoot when he does media. 🎥s set up on a steep-ish hill pic.twitter.com/CZpYj0kNV2

“All of the players out there are part of the blueprint for the defense.”

W/o Isaiah Wynn at right tackle & w/ Justin Herron limited after leaving Thursday’s game vs. the Giants, Yodny Cajuste played there opposite LT Trent Brown. Cajuste also left the preseason opener for the injury tent. So good news in his case at a position where depth is needed.

Lil’Jordan Humphrey had a good night vs. the Giants (6 catches on 8 targets for 62 yards, including a 20-yard TD reception). The ex-Saint has been playing catch-up since signing with Pats post-OTA’s in June. At 6-4 and 225 pounds, Humphrey’s size stands out (below, left). pic.twitter.com/jwKdDyxL9Z