1 month ago at 10:49 am ET
Follow @IanLogue
Posted Under: Patriots News 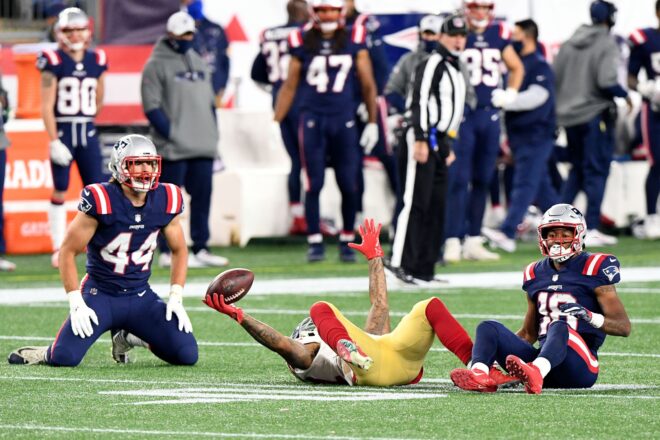 Some Patriots news on this Wednesday:

– Given what we saw during OTAs and minicamp, the feeling seems to be that we’ll see more of New England Patriots quarterback Mac Jones potentially pushing the ball downfield more this season.  With that in mind, Pro Football Focus pointed out a stat that will hopefully see the second-year QB have some success in 2022.  According to PFF, of the receivers with the highest passer rating generated when targeted on 20+ yard throws since 2019, newcomer DeVante Parker comes in second.  They have the top three listed as Amari Cooper (139.4), Parker (134.6) and DeAndre Hopkins (133.1) respectively.  All indications are that Parker should hopefully fall into the role many had hoped former first-round pick N’Keal Harry would have filled, which obviously hasn’t happened.

– Harry remains on the roster but he’s up against a crowded receiving group that will likely see his run come to an end at some point.  The fourth-year wideout saw himself relegated to the third-team during OTAs and was pretty much a non-factor, which was a bad sign heading into training camp.  The club currently heads into next month with a group led by Kendrick Bourne, Nelson Agholor, Jakobi Meyers, and Parker as Jones’ likely primary targets, along with second-round pick Tyquan Thornton.  They also saw a solid showing from Tre Nixon, who came on strong late in OTAs.  The team also added former Saints receiver Lil’ Jordan Humphrey back on June 15th to join Kristian Wilkerson and Nixon as players who will likely be fighting for spots on the team.  As a result, this is a tremendously deep group that should definitely be competitive in the coming weeks.

– The Patriots do have a fair amount of players who are heading into what will likely be a make-or-break training camp, with Devin Asiasi and Dalton Keene among two key names that will be worth watching.  Asiasi has seemed to have had the edge development-wise, with Keene having been seemingly battling injuries since the team took him with the 101st pick in the third-round of the 2020 draft 10 picks after Asiasi (91st overall) was selected.  The former Virginia Tech tight end has appeared in just six games and has just three receptions for 16-yards along with a fumble.

– Asiasi hasn’t fared much better, appearing in 10 games with 2 catches for 39-yards.  With Jonnu Smith and Hunter Henry both again likely to be the priority in New England’s offense, there likely won’t be many more opportunities for Keene to stick around, especially if Asiasi ends up winning out next month.  But given that the club traded up for both players in that 2020 draft (they traded the 100th, 139th and 172nd pick for the 91st and 159th overall for Asiasi, and the 125th, 129th and a 2021 6th round pick to the Jets’ for the 101st pick for Keene), it’s definitely disappointing to see neither has worked out to this point.

– Julian Edelman brought up an interesting point during his appearance on I AM ATHLETE where he talked about how much Bill Belichick has evolved as a coach when it comes to how he handles his players “Honestly, he’s evolved,” said Edelman.  “A lot of people want to say he’s not fun, and he’s this, I mean, that’s how it was 20-years ago.  But the game’s evolved and that’s something that he does well, I believe.  Because he evolves to players.  He evolves to this new generation.  I can remember in 2015, we’d have these leadership groups in the offseason with guys that were there and we’d talk about, like, the new player coming in.  Like, [in is Belichick voice] ‘these new guys, now, you know, it’s different.  They’re on social media …’  You know, we’d have like seminars, and like he’s always thinking about how he can get better. ‘I’ve got to learn my players in order to get the best out of them’.”

– Lucas Oil Stadium is apparently getting some upgrades, with local news station WTHR reporting that the venue is seeing an upgrade to its video boards ahead of the 2022 season.  Crews are reportedly working hard to get them done ahead of the Big Ten football media day that’s scheduled for July 26th, with the Indianapolis Colts set for their first preseason game against the Detroit Lions on August 20th.  Looking at the video, it doesn’t appear to be anything overly impressive, especially given what’s currently going on at Gillette Stadium with what should be one of the more impressive boards in the NFL once the upgrades in Foxboro are completed.

– Some interesting reports coming out of Las Vegas with former Raiders defensive lineman Warren Sapp apparently not hearing great things about Colin Kaepernick‘s workout with the team this offseason.  “I heard it was a disaster. I heard one of the worst workouts ever,” Sapp reportedly said a recent report.  Kaepernick’s agent refuted that report, but Sapp’s former teammate, Lavar Arrington believes that Sapp didn’t make it up. “I know Sapp pretty well… He ain’t lying,” said Arrington.  “One thing Sapp is not is a ‘liar.’ If you’ve played for an organization you know people in the organization. There’s certain places that you can get information that in other cases you wouldn’t get that information. Sapp played for the Raiders, and Sapp probably has a relationship with a couple people that are in the organization. If Sapp didn’t know, hear, or have a discussion with someone who was in the organization he wouldn’t have even talked about it. Knowing how Sapp is, the reason why Vlad [the interviewer] even asked it was because he was setting up Sapp to be able to talk about something he already had information on, so let’s just be clear on that.”

– It’s kind of funny listening to some of the talk in Cleveland where, given Deshaun Watson‘s current legal woes that some remain hopeful that Baker Mayfield may stick around to bail them out this season while Watson serves what’s reportedly likely to be a significant suspsension.  Mayfield told reporters recently that he hasn’t heard anything from the team, and he’s ready to turn the page.  “No, I think for that to happen, thee would have to be some reaching out,” said Mayfield via Carey Murdock, who caught up with the quarterback during a recent youth football camp.  “But we’re ready to move on, I think on both sides.”  No real surprise there, given the damage done by the Browns.  For now, interest in Mayfield seems to remain to be coming from both Carolina and Seattle, although neither club has been able to consummate a deal to this point.