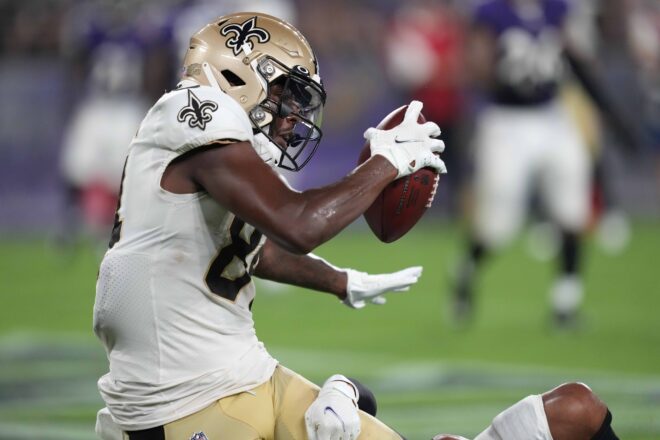 With training camp just over a month away, the Patriots appear to be adding some additional depth at the wide receiver position.

According to NFL Media reporter Ian Rapoport, the team has signed former New Orleans Saints receiver Lil’ Jordan Humphrey to a one-year deal.  Terms of the deal were not disclosed.

Humphrey is a former undrafted free agent who began his career with the Saints.  He’s had a quiet few seasons, appearing in a total of 18 games with 16 receptions for 295-yards along with three touchdowns, most of which came in 2021.  He had 13 receptions for 249-yards and two touchdowns last season, with seven of those 13 receptions going for 20+ yards, including one for over 40yds.

He’s physically a big player and he’s listed at 6’4″, 225-pounds.  His addition gives the Patriots an even more competitive group heading into training camp, likely creating some competition at the lower part of the roster.  That should set up an interesting battle between players like Ty Montgomery, Kristian Wilkerson and Tre Nixon, with Nixon having finished with an impressive showing during the team’s recent minicamp.

By: Steve Balestrieri
“Jimmy was practicing and then decided not to play. Jacoby played with no ligaments in his thumb, which you can’t do that as a quarterback."
1 hour ago