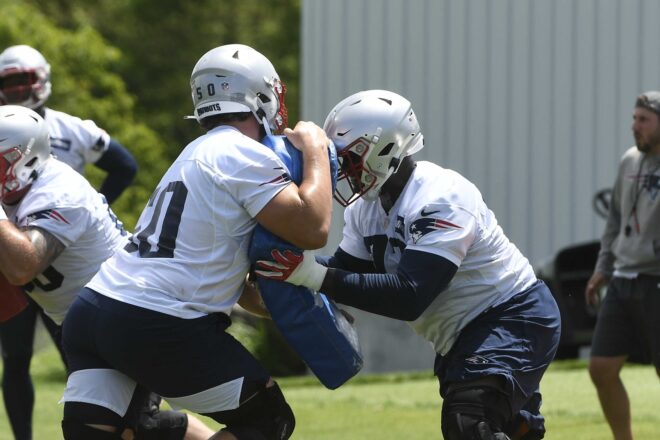 Some New England Patriots news and notes on this Thursday:

– The Patriots have a fairly crowded receiving corps heading into training camp but they added a former New Orleans Saints receiver late Wednesday after signing Lil’ Jordan Humphrey to a 1-year deal.  Humphrey is a former undrafted free agent in 2019 who had his most productive season in 2021 after catching 13 receptions for 249-yards and two touchdowns.  He seems like was a fairly big-play guy when he had his opportunities, with seven of those 13 receptions going for 20+ yards, including one for over 40yds.  He’s also big physically as he’s listed at 6’4″, 225-pounds.  He played a fair amount of special teams snaps, so Humphrey will likely be additional competition for players like Kristian Wilkerson and Tre Nixon for a roster spot.

– Former Patriots linebacker Brandon Spikes is no stranger to having odd things happen to him and that was the case on Wednesday after he was reportedly struck by an airport bus.  Fortunately, he appears to be O.K. after he posted a photo to his Twitter feed where he can be seen on a stretcher with a neck brace with the caption “Just got hit by a freaking airport bus y’all pray for ya boi”.  Some might remember a bizarre incident in 2015 which ended Spikes’ potential second stint with the team before it ever got started.  He reportedly was involved in a late night accident on Interstate 495 where he rear-ended a couple at a high rate of speed and left the scene, later claiming he hit a deer.  He was subsequently released.

– Former Patriots receiver Julian Edelman appeared at a festival at the Sunset Sports Media festival in Zadar, Croatia over the weekend and left the door open on a potential comeback.  He was asked if he’d ever consider possibly coming out of retirement to play with his former teammate, Tom Brady. “I don’t know, we’ll see,” said Edelman.  “That’s called a little teaser. We’ll see. We’re staying in shape but you never know. But I’d probably go back to the Patriots. I love the Patriots. Foxborough Forever.”  Edelman announced his retirement from the NFL last year and was honored by the team at halftime last September.  A place in the Hall at Patriots Place is likely in his future.

– Offensive lineman Trent Brown appeared on the Pat McAfee Show on Wednesday and talked about a variety of things, including the challenges he’s dealt with when it comes to his weight.  Brown said he currently weighs 370 pounds and while he has financial incentives to get himself right, he has bigger reasons he’s working toward, which include being on the field each week.  “You can’t lead if you’re not doing everything that you can do to be in on the field week in and week out,” said Brown.  He called Bill Belichick a ‘super cool guy’ and also talked about why he likes it here.  “Here with the Patriots, we keep s**t in house,” said Brown.  “Whatever people speculate on the outside, that’s just what they speculate but they’ll never really get any truths from inside the building.”

– New Orleans defensive player Marcus Davenport has had a tough offseason, having had his left pinky finger partially amputated this offseason.  The procedure reportedly came after he suffered complications from a broken plate in the finger that came from a previous injury he suffered in college.

– Joe Burrow has apparently come a long way since the knee injury he suffered during his rookie season, with the quarterback hitting an impressive milestone in practice on Wednesday.  During sprints, Burrow reportedly hit 20.8 mph which Burrow said is just him returning to where he was before the injury, “It’s just getting back to where I was prior. And I’ve been able to focus on the entirety of myself as a player,” said Burrow.

– Out in Kansas City, tight end Travis Kelce is apparently getting people’s attention with his approach to the season.  Kelce is reportedly looking “hugrier than ever”, with in-house broadcaster Mitch Holthus saying that Kelce has been training like an undrafted free agent so far this offseason.  The veteran tight end is in his 10th season, all with the Chiefs since being drafted by the club in the 3rd round back in 2013.

– With Deshaun Watson’s status for the 2022 season in question for the Browns, they’ll likely need someone to potentially fill in for him this season in the event he’s suspended by the NFL due to his current legal issues.  Baker Mayfield likely won’t be that guy as he continues to be the subject of trade rumors, with teammate Jacoby Brissett being the likely candidate.  Mayfield has been rumored as being potentially involved in a trade to Carolina, but one question has been whether or not the deal could possibly include Sam Darnold.  Cleveland.com’s Mary Kay Cabot reports that a one-for-one swap is “very unlikely”, with Darnold currently set to make $18.9 million this season with the Panthers.  His deal is why Carolina is pushing Cleveland so hard to absorb more of Mayfield’s salary, which has been reported to be one of the key sticking points of the deal.

By: Ian Logue
New England Patriots news for 7/1 along with NFL notes in today's daily notebook.
4 hours ago