3 weeks ago at 10:48 am ET
Follow @IanLogue
Posted Under: Patriots News 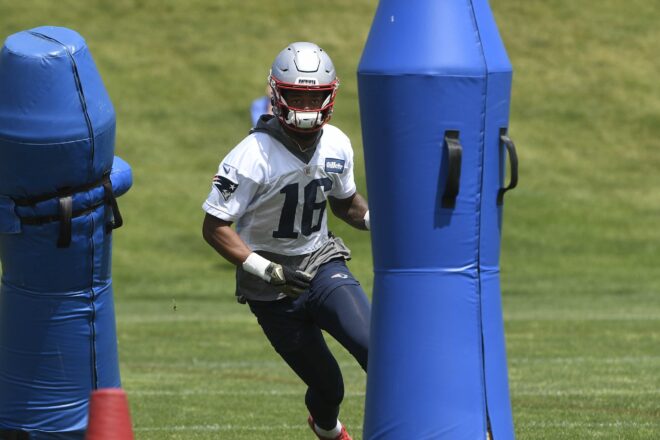 Some New England Patriots news on this Tuesday:

– The Patriots saw wide receiver Jakobi Meyers finally sign his restricted free agent tender on Monday, which crosses off another important part of this offseason’s “to-do” list.  His contract is reportedly worth $3.98 million and will now at least keep him with the club through the 2022 season.

– According to ESPN’s Adam Schefter, Meyers is hoping to eventually reach a long-term deal with the team that gave him his opportunity as an undrafted free agent.  Schefter reported on Monday that Meyers’ agent, Drew Rosenhaus, is continuing conversations with the club on a potential extension.

– Any hope of any extension or taking care of additional contracts remains a question mark given the Patriots’ current financial situation.  According to Patriots salary cap expert Miguel Benzan, New England remains up against the cap with just $321k in space.  That means that the team is going to need to clear room to finish getting their draft picks signed as well as for any additional potential moves they might need to make in the coming months.

– There was some disappointing news on Monday after ESPN’s Field Yates reported that defensive tackle Daniel Ekuale has been suspended for the first two games of the 2022 season for an undisclosed reason.  Ekuale originally signed to the Patriots’ practice squad last September, which included being elevated several times to the active roster during the 2021 campaign.  He was productive over that stretch, finishing the season with two sacks and six tackles, and he was later given a futures contract with the club earlier this offseason.

– For anyone wondering about what Bill Belichick might do once his NFL coaching days come to an end, it’s possible we could see him move on to try and conquer another sport.  Premier Lacrosse League co-founder Paul Rabil appeared on Pardon My Take Monday and said he believes Belichick would be interested in coaching lacrosse.  Rabil touted Belichick’s ability to command the room and also believes if he did coach in the sport, it wouldn’t be long before he started winning.  “I feel like he would win in the first three seasons of coaching, if not sooner,” said Rabil.  “I don’t think he really coaches football, he just coaches. He coaches human beings. He’s so good at that.”

– Looking back at last season, one thing worth noting regarding Meyers will likely hinge on the future of N’Keal Harry, who to this point is still on the roster.  As good as he was in the run game, Harry’s presence on the field was a hindrance offensively in 2021.  We saw this in their Week 17 match-up against Jacksonville when Harry was a healthy scratch and Kristian Wilkerson was elevated.  Wilkerson showed good speed and quickness during that game, which stressed the defense and left Meyers with better match-ups.  Meyers finished that game 8-of-8 for 73-yards and a touchdown, which was the most productive outing for him since Week 4 when he also had 8 catches for 70-yards against the Buccaneers.

– The above may end up being a reason why Meyers will potentially build on his 83-catch, 866-yard season.  The same could potentially be said for Kendrick Bourne, who caught 55 passes and had 800-yards.  Could this be a year where New England has two guys break the 1,000-yard mark?  It’s possible, and Wilkerson’s appearance last year might see Parker be the difference-maker they’ve been missing.  That still, obviously, hinges on the team parting ways with Harry.

– Former Patriots QB Jimmy Garoppolo remains on San Francisco’s roster heading into training camp, but the belief in the Bay Area is making things appear like the club could potentially cut him before the season.  If that happens, ESPN analyst Louis Riddick believes Garoppolo would be perfect for the Seahawks.  “The 49ers are not going to trade Jimmy Garoppolo to the Seattle Seahawks in the division,” Riddick said on “NFL Live” last week. “But when they cut him, and it sounds like they will cut him eventually, I would be all over that. All over it if I’m the Seattle Seahawks.”

– As things continue to get worse for Deshaun Watson, the Carolina Panthers are reportedly making a push to acquire Baker Mayfield.  Jonathan Jones of CBS Sports reports that the Browns have been in discussions with the Panthers but the issue that appears to be holding things up is how much of Mayfield’s salary Cleveland is willing to absorb to get a deal done.   Jones also reports there’s “urgency” on Carolina’s side to get the deal done so that the quarterback can potentially get some time to work with the club during minicamp.

– Jets QB Zach Wilson has apparently looked good in OTAs and head coach Robert Saleh believes the second-year quarterback is settling into the offense after a bumpy first season.  Wilson, who had the second-highest time to throw in the NFL at 3.00 seconds according to Next Gen Stats, reportedly was fast with his release and has been getting the ball out of his hands much quicker.  “I think he’s a lot more comfortable in the offense,” said Saleh recently. “I think he’s committed to the process of taking the snap and going through progression, understanding exactly where his eyes need to go on every snap.”