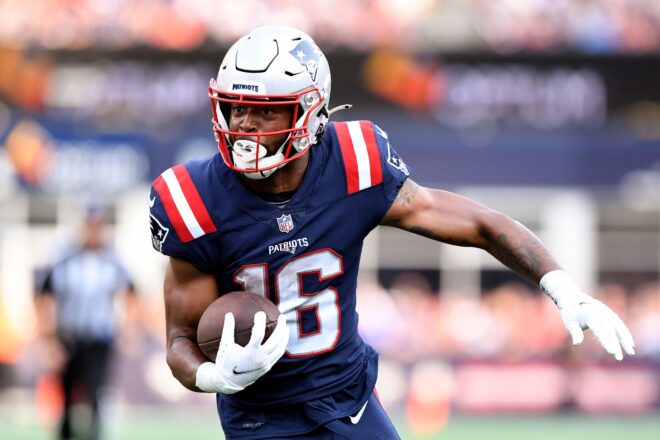 After leading the team in receptions for the New England Patriots in 2021, wide receiver Jakobi Meyers had gone through OTAs without having signed his restricted free agent tender and had recently told the Boston Herald that he was hoping a long-term deal might be in his future.

That doesn’t appear to be the case for his immediate future, but according to reports, the former undrafted free agent officially signed his tender on Monday.

The deal will see him earn $3.98 million for this year as Meyers looks to build off of a career season.  He’s coming off a year where he led the team in receptions after catching 83 passes for 866-yards and two touchdowns, which were all career-highs.

Meyers initially had until June 15th to sign his deal, or the team could have potentially reduced his tender.  Listening to Meyers last week, things didn’t sound contentious, and the fact that he’s officially signed is certainly good news.

It’s been a while that the Patriots were a situation where a player didn’t sign his restricted free agent tender and things got ugly.  Former offensive lineman Logan Mankins refused to sign his back in 2010, with the guard asking to be traded in June of that year.

The team did actually reduce his tender from $3.26 million down to $1.54 million and Mankins didn’t show up for camp and ultimately sat out until early November before eventually signing it.  However, Mankins did so primarily to not lose his vested season.

Meyers is in a deeper receiving group than the club had at this point last offseason.  He joins incumbents Nelson Agholor and Kendrick Bourne, as well as newcomer DeVante Parker.  Second-round draft pick Tyquan Thornton is expected to be a factor and Tre Nixon also had a solid minicamp, which should make next month’s training camp a competitive one.

“It’s a great place to be,” Meyers told the Herald recently.  “The guys in the locker room — I’ve learned more about being a man just from them than probably my whole life. It’s just been great to be around those guys. It’s a great city to be in. I’m happy here.”

Fortunately, it looks like he’ll be here for at least one more season.