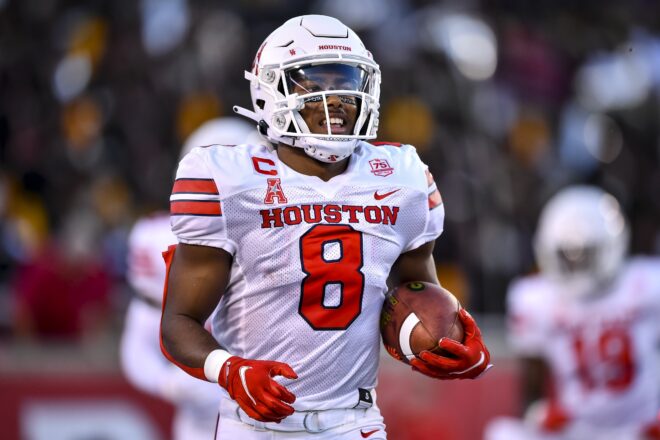 The Patriots made their first defensive selection of the 2022 NFL Draft on Friday night, adding a pretty dynamic player to their football team.

They selected University of Houston defensive back Marcus Jones with the 85th overall selection, who brings a lot of terrific attributes to a team that addressed more than one need by grabbing him.

Jones initially began his career at Troy before transferring to Houston, where he ultimately became one of the top players in the country.  He also won the 2021 Paul Hornung Award winner as the nation’s most versatile player as Jones excelled in quite a few roles during his collegiate career.

Here’s a quick rundown on some things to know about one of New England’s newest players:

1) One of the things that stands out about Jones is that he’s got really good technique and is a fairly polished player.  Watching him on film, he’s someone who does a great job staying with his man and has great instincts with an unbelievably quick break on the football.

Even more impressive was the fact that Jones really mirrors receivers well, breaking on the ball and at times essentially running the route for them while stepping in front and taking the ball away for an interception.

According to PFF, he earned a coverage grade of at least 80 at both Troy and Houston, with Jones finishing his final season with 12 pass breakups as well as five interceptions.

Needless to say he’s a guy who was really a solid player and addresses an area of need for a team that needed to add some youth after having recently lost J.C. Jackson.

He’s not considered to be an outside player and is thought to be more of a slot cornerback, which is still a big position of need and gives them some additional depth with Jonathan Jones potentially among several players set to hit free agency after this season.

He Might Not Be Big, But He Makes Up For It

2) The biggest knock on Jones is the fact he comes in at just 5’8″, which led to quite a bit of buzz about him among fans following his selection.

But what really stands out when looking at the film is that he plays a lot bigger than he is.  His leaping ability was impressive, with quite a few highlights showing him leap up and over a receiver to make a play.

Jones didn’t participate in Houston’s Pro Day, aside from reportedly taking part in the measuring session.

But in terms of how he plays, he’s a guy with a high-motor who sticks to his man and is someone who appears to have great instincts and is a playmaker.

For a player who might be a little hampered by his height, he definitely overcomes it with his tenacious approach, which certainly makes him a great fit in New England’s defense.

3) Jones isn’t just great in coverage, he’s also a player who doesn’t shy away from contact.

Watching video of him, he’s a guy who likes to attack the ball carrier, with PFF agreeing and pointing out that Jones “relishes the chance to get involved as a tackler in the run game” calling him a “hard-nosed dude”.

He fights through players and does a great job of getting through and coming up to make tackles and he’s also really good in the open field.

He finished last season with 46 tackles including one for a loss, but it’s the physicality that fans will likely enjoy watching when they see him on the field in the coming months.

What he lacks physically, he definitely seems to make up for with his style of play and he certainly appears to be a good addition.

4) As good as Jones is defensively, he’s absolutely outstanding in the return game.

He finished his 2020 season averaging 19.8 yards on 17 punt returns for a FBS leading 337-yards along with a touchdown.  His 2021 season was also impressive as he returned 26 punts for 374 yards and two touchdowns.

Watching Jones, he’s really good at changing direction, which likely can be attributed to his play on defense.  But there were quite a few occasions where he completely faked out would-be tacklers, only to accelerate by them.

He was also used on kickoff returns, which saw an increased role there last season where he returned 15 kicks for 510-yards and two touchdowns, one of which was a game-winning return with under 30-seconds left to play to upset an unbeaten SMU team who had been 7-0 coming into that game.

As a result, Bill Belichick essentially filled two needs Friday night, potentially giving the team a possible replacement for Gunner Olszewski, who departed via free agency to Pittsburgh this offseason.

5) Thanks to his athleticism, Houston actually used Jones on the offensive side of the football against Rice in Week 2 of last season during a 44-7 rout.

In that game, Jones lined up on offense and was targeted five times and finished with four receptions for 51-yards.

They targeted him on a 1st-and-10 on their second possession of that contest, which saw Jones get things started with a 19-yard gain, and then they hit him again two plays later for a 29-yard pick up that got them down to the Rice 28-yard line and led to a field goal.

Jones enjoyed the experience, which ended up being a productive outing to add to what is already a fairly impressive resume.

“I don’t remember the last time I haven’t played defense,” Jones said at the time. “I felt excited being on the other side of the ball. I’ve played receiver all my life basically too. So anyway I can help the team, I’m down for it.”

As we know, Belichick loves versatile players and in addition to being a solid defensive player, it’s safe to say that Jones definitely checks that box.

Your pro day numbers are for a different Marcus Jones that was a 2018 draft prospect. The Patriots Marcus Jones didn’t do drills at his pro day and thus doesn’t have vertical and 3-cone numbers. If he did, they would be much better than those pedestrian numbers.

Thanks, Pat, I obviously misread that and I appreciate you pointing that out. It’s been corrected.

By: Mark Morse
The Offensive Line has been a source of controversy this off-season.  Start with the trade of Shag Mason, which Kristopher Knox of Bleacher Report labeled…
11 hours ago

By: Ian Logue
Seeing Patriots QB Mac Jones work with his teammates as a second-year player is just impressive, as Jones is completely in command of things out…
13 hours ago