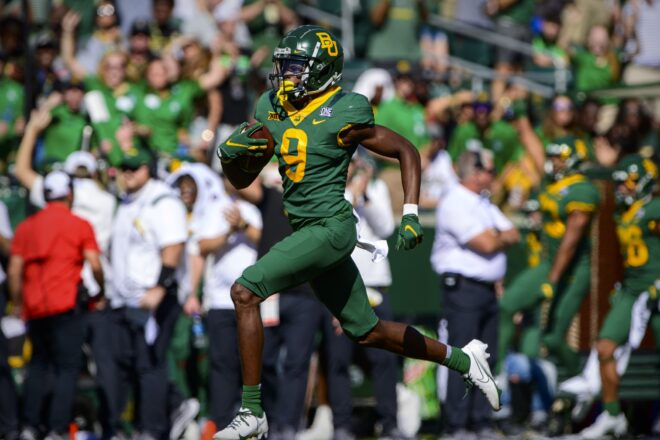 The New England Patriots grabbed an explosive player on night two of the NFL Draft, selecting wide receiver Tyquan Thornton out of Baylor in the second round.

New England thought highly of Thornton, so much so that they made a trade with Kansas City to move up from #54 to #50 in order to get him.

He finished his college career with 143 receptions for 2,242-yards and 19 touchdowns, with 62 of those catches coming in his senior season where he also recorded 10 of those touchdowns.

He’s certainly an intriguing player, and here’s a rundown of what he brings to the Patriots:

1) Bill Belichick has always said that you can’t coach speed, and that’s an attribute that Thornton definitely brings.  He was the fastest player in the NFL draft, running a 4.28 40-yard dash at the NFL Combine.  He also put up an incredible 36.5-inch vertical jump and a 130-inch broad jump.

Looking at the film, he’s definitely a deep threat but another thing that stands out is that he’s terrific in the open field.  He’s a player that when Baylor got him the football in space, he was too fast for defenders to deal with and he’s someone with the ability to make plays.

Given his stats on his vertical, there were some plays that stood up where he’s not afraid to go up and get the football and he did a good job of going up over defenders to pluck the football out of the air.

But his strength is definitely his speed.  Mac Jones has so far done a great job of hitting guys in stride and allowing them to make yards after the catch, which should be a strength for someone like Thornton, who gives New England a speed element that should be a good compliment to their current group of receivers.

2) Thornton is also a tall receiver, coming in at 6’2″, 181-pounds.  While he’s a little lean, he gives the Patriots a good size target, joining a group of receivers who are all over six feet tall.

Newcomer DeVante Parker leads everyone at 6’3″ among starting players, followed by Jakobi Meyers, who like Thornton is also 6’2″ (although the team lists Thornton at 6’3″, he measured officially at 6’2 3/8″ at the combine), followed by Kendrick Bourne (6’1″) and Nelson Agholor (6’0″).

N’Keal Harry comes in at 6’3″, but how he’ll factor in remains a big question and he’s yet to be moved at this point in the draft.

3) Scouting reports talk about his route running and looking at the film, he’s really smooth.  He glides down the field and into his break, with not a lot of wasted movement.

Another thing that’s talked about is the fact he’s also someone who catches the football away from his body and he has great hands, despite catching some criticism for not having the biggest hands.  That measurement comes in at 8 1/4″, which is about an inch smaller than his peers.

One of the things that each of the receivers has talked about is the fact that Jones throws a very “catchable” ball, so that should be something that should make his hand size a non-issue, albeit ball security will likely be something to keep an eye on.

He’s Not Just a Deep Threat

4) He’s also tough and he isn’t just an outside receiver.  He shows no hesitation going over the middle, which was something Baylor seemed to do more of with him last season.

He’s a nightmare in that situation because the guys in that area often didn’t seem to have a shot of matching up or keeping up with him.  He’s also shifty and is quick to turn upfield, which when he gets in-between players is definitely a strength because his acceleration is ridiculous.

Obviously, his lack of weight for his size will be something people talk about but with five months to go before the start of the regular season, there’s plenty of time for Thornton to get to work to bulk up and get his body ready for the rigors of the NFL.

He’s Got a Great Work Ethic

5) He also fits the bill in terms of being someone who puts in the work behind the scenes.

His head coach at Baylor, Dave Aranda, told SI.com earlier this offseason that a lot of that came later in his collegiate career when he grew as both a persona and a player, and that work has clearly paid off.

“I think he’s matured,” said Aranda. “Ty has been, from the very beginning, blessed with great length and speed and athleticism. I think where Ty has really grown is his practice habits, his mindset, his attitude towards work. I think those things have really taken off, and I think there were some probably hard lessons in all that.”

Thornton also spoke highly of Aranda during an appearance with Jim Rome as well, saying that the Baylor head coach helped him become the player he is today.

“Dave Varanda taught me how to be a pro,” said Thornton back in March.  “He wasn’t the type of guy that would just yell at you and be on your back about things that you’re supposed to be doing.  So going from Matt Rhule who was the type of guy who was very verbal about what he wanted and Dave Aranda who was more calm and collected through situations.  You kind of learn how to be a pro and do your work on your own and be at your best.  He treats you like a pro.”

Now he’s made it to the NFL and he’s here in New England, where he’ll hopefully put everything he learned to work in the coming months.