10 months ago at 11:16 am ET
Follow @IanLogue
Posted Under: Patriots News 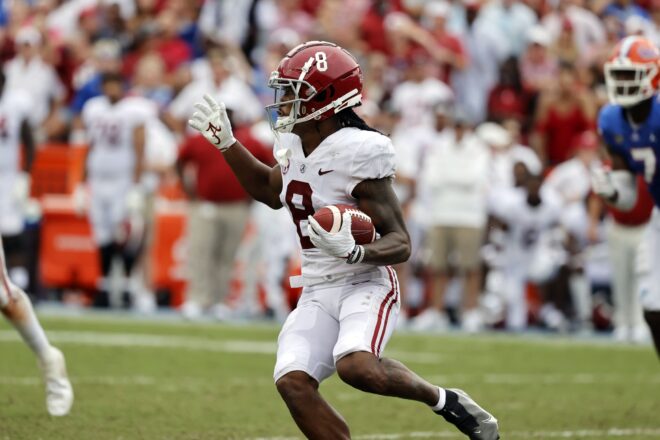 1)  As the Patriots still mulling their options heading into the NFL Draft, it looks like they’re again taking some time to do some due diligence on another Alabama receiver.

Wideout John Metchie III is reportedly set to make a visit today, with the New England Patriots opting to use one of its Top 30 visits on a player who is a previous teammate of Mac Jones and someone that has experience and chemistry catching passes from his former QB.

The two connected on 55 passes for 916-yards and six touchdowns as the Tide went undefeated to a National Championship, so it’s clear that the likelihood of them getting on the same page shouldn’t be much of an issue.

At the NFL Combine, Metchie pointed out that there’s been a trend for teams to target former teammates of their starting quarterbacks, with the 2021 season being a key example when you look at Cincinnati.  They drafted Joe Burrows’ former teammate Ja’Marr Chase, who went on to have an unbelievable season after finishing with 81 receptions for 1,455-yards along with 13 touchdowns.

Another example is what happened down in Miami.  The Dolphins selected former teammate Jaylen Waddle at #6 overall last season, reuniting him with former Alabama quarterback, Tua Tagovaiola.  Waddle went on to have a strong rookie campaign after he hauled in 104 receptions for 1,015-yards and 6 touchdowns.

That’s not to say it’s a guarantee that Jones and Metchie would experience the same success, but given the Patriots’ history when it comes to that position, it would at least potentially reduce the risk of ending up with another player who just can’t get on the same page.

Metchie said back at the Combine that, “I think Mac-10 and I would be special together, for sure.”  Coming off of an ACL tear, the belief is that he’ll be a Day 2 selection and it will be interesting to see if Belichick decides to take a shot at bringing him in.

Our own Steve Balestrieri talked about Metchie on a recent podcast (see below).

2) The Patriots also have other players they’re reportedly visiting with this week.  According to Doug Kyed of Pro Football Focus, the club is set to meet with Arizona State defensive back Jack Jones today as well, making this their second visit with the former Sun Devel after holding a Top 30 visit with him in New England last week.

Jones is an interesting name as he’s a talented player, but off-the-field issues will likely see him fall down the board after he and two others were arrested for breaking into a Panda Express back in June of 2018, but it appears there was some context to it.  After struggling academically at USC, he was dismissed from the team earlier in the spring after being declared ineligible, which saw things spiral leading up to that arrest.

He ended up leaving USC and went back to work, putting in time at a community college before ASU gave him an opportunity at a second chance, and he ended up making the most of it.

The former Sun Devil has also gained some additional perspective after the birth of his daughter in 2019, which has him focused on being his best as he tries to take the next step into the NFL.

He’s a great story, and a solid player who some believe hasn’t reached his full potential.  For a team in need of a young talented defensive back, it certainly seems like it could be a good fit.

From a football standpoint, he seems like a terrific player.  He does a good job getting good position defensively, loves to hit, has a quick break on the ball, and is extremely athletic.  Here’s a video below of some highlights:

3) NFL Media’s Mike Garafolo reported that the Patriots are also taking a look at a couple of other former Arizona State standouts, with defensive back Chase Lucas and linebacker Darien Butler each set to visit the club.

Lucas isn’t the biggest of players, coming in at 5’11”, 180 pounds, but one of the areas where he stood out at his pro day was his quickness after running a 6.78 three-cone drill, as well as his speed at the Combine after posting a 4.48 40-yard dash.

On film, another area of notice was the fact he’s not a player who is afraid of contact, showing a good break on receivers and he does a good job of bringing guys down.  He’s also solid in coverage with a knack for getting his hands on the football and making plays.

He was also a leader on defense and a captain, which as we know are additional traits that Bill Belichick looks for in a player.

Here’s a look at some highlights from him:

As for Butler, he’s an interesting player.  He’s 5’11’, 221-pounds and while he’s also not the biggest of guys, he’s extremely athletic and looking that the film, he’s also terrific around the football.

He can drop into coverage and does a good job of diagnosing the play and driving on the ball.  As we’ve seen, with things trending that way around the league, he seems to be a fit for what New England may be trying to do moving forward as the club tries to get faster on the side of the football.

As a senior, Butler recorded 68 tackles including 8.5 for a loss, as well as picking off three passes.  He also had two sacks.

Listening to him earlier this year, it’s easy to see why Belichick may have his eye on him.

“Before a play happens I get the call, I’m looking at the down and distance,” said Butler via SI.com. “I start to read mannerisms, I look at formations, the backfield of course. I look at the play clock a lot; I really take care of the mannerisms. You see a lot of things on film that people show; I try to do stuff like that. I love watching film. It tells you everything you need to know (in terms of) the offensive philosophy and what they’re trying to do.”

Here’s a look at some of his highlights:

4) Looking around the league, one topic of discussion out West is obviously centered around the Denver Broncos and Kansas City Chiefs, with Russell Wilson instantly changing the tenor of that rivalry.

Wilson comes to a Broncos team that has lost its last 13 meetings against the Chiefs, with Patrick Mahomes having accumulated a 9-0 record over that span (Alex Smith won the other four meetings).

Obviously, Wilson will be a player looking to change that.  Overall, he’s 1-1 against Kansas City during his career, with Wilson beating them in their most recent meeting with the Seahawks back on 12/23/2018 where he finished 18-of-29 for 271-yards and 3 touchdowns.

That rivalry essentially has reached where the Patriots and Bills are right now as the Broncos look to try and grab a hold of a Division that has been dominated by Mahomes and the Chiefs in recent years, with Kansas City having won that division every year going back to 2016.  The last time Denver won the AFC West was all the way back in 2015.

One of the biggest changes this offseason was the loss of Tyreek Hill, who Denver fans were thrilled to see exit their division when he was shipped off to Miami earlier this offseason.  Against the Broncos, Hill had racked up 492 yards receiving along with 5 touchdowns as a receiver, which made life extremely difficult.  He was also brutal in the ground game, having rushed for 131-yards and two touchdowns.

As a result, with Wilson at the helm and with what’s transpired this offseason, they suddenly feel like they have a chance to compete in a Division that previously felt out of reach.  Whether or not the balance of power will shift to Denver remains to be seen, but they’re certainly much more optimistic than they were prior to this offseason.

5) Meanwhile, there’s the other side of the things where down in Atlanta, they’re a little less optimistic.

After trading Matt Ryan to the Colts this offseason, they’re in a brutal position financially after being left with $40.5 million in dead money, which is added to the $15.5 million they were left with from Julio Jones, as well as additional hits by Dante Fowler ($4.7 million) and Tyeler Davision ($1.2 million).  That adds up to $61.9 million in dead money, which accounts for close to 30% of their cap number for 2022.

The thought appears to be that not moving Ryan a year ago when they could have potentially gotten more for him was a major mistake, and now the Falcons are paying dearly for it.  Worse yet, had they moved on from Ryan last offseason, the Falcons had a shot at Justin Fields and Mac Jones in the 2021 Draft but instead went with Kyle Pitts with the #4 overall selection.

While Pitts had an outstanding rookie season after finishing with 68 receptions for 1,026-yards and a touchdown, it doesn’t change the fact that the Falcons now have an all-world tight end without a proven quarterback to throw him the football.

Atlanta replaced Ryan with Marcus Mariota and they have Feleipe Franks behind him.  Franks was inconsistent at Florida and had a decent career at Arkansas, but it remains to be seen if he can become a starting-caliber player in the NFL.

Mike Sando of the Athletic spoke to one NFL executive recently who probably said it best when it comes to the Falcons’ situation, with last year’s trade of Matthew Stafford and Jarod Goff being a prime example of knowing when to move on at the right time.

“I think they just gave Matt Ryan away to wherever he wanted to go,” one exec told Sando. “One year ago, they get at least a one for him. That’s why Detroit moved so quickly trading (Matthew) Stafford, to get ahead of all the other quarterbacks dominoes that could have fallen. Atlanta waited, which is why Matt Ryan went for a three.”

And that’s why the Falcons are hamstrung with a lot of dead money and don’t have much to show for it.  It’s amazing how far they’ve fallen, and it seems like they’ve definitely  got their work cut out for them for the foreseeable future.